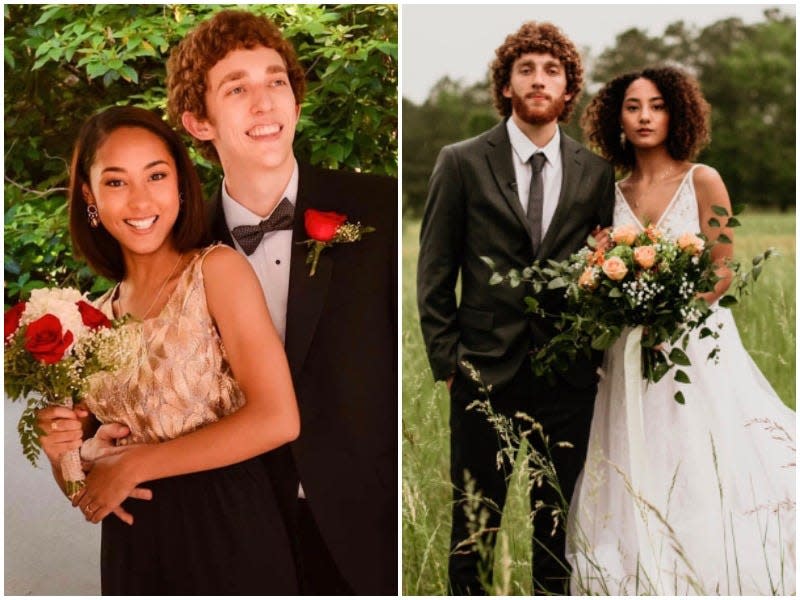 High school sweethearts don’t always stay together forever. But some couples stick it out, weathering challenges beyond classrooms and corsages to build lives together.

Insider asked 12 married couples who have been together since high school to share their prom-to-wedding transformations – and their secrets for a lasting relationship. Here’s how they do it.

“Communication is key! I cannot stress that enough,” Samantha told Insider. “We are not afraid to talk about anything.”

“We have similar interests so most of our days are spent doing activities together that we both really enjoy,” Kelsey said. “But we also have our own separate hobbies and careers that we give each other space for and support each other in. I’m not sure that we have a secret to a long relationship, all we really know is that we are soul mates. Being able to grow up by each other’s side has been the most amazing life experience.”

“I think the secret for making a relationship last is ensuring that you are best friends first,” Darby said.

Taylor’s relationship advice is to “keep each other laughing and don’t brush anything under the rug.”

“Respect goes a long way,” Tashley said of their secret to making a relationship last. “And always support each other in public, correct each other in private! Date nights are a must and keep the fun going.”

“Communication and willingness to address problems together are important,” Ginelli said. “If you have that, you can overcome anything together.”

“Make sure you are friends in addition to partners,” Melissa said. “Life is a lot easier when you are married to your closest friend.”

Sydnie and Bailey went to prom together in 2016 and walked down the aisle in 2019.

“Our secret for a long-lasting relationship is putting God first, lots of communication, and not sharing everything with the whole world!” Sydnie said.

Alaina and Bruce were prom dates in 2015 and became husband and wife in 2018.

Alaina says that when it comes to making a relationship last, “communication is key, and always remind each other of the things you love about each other.”

“The secret is realizing your spouse is your friend, your best friend, and communication and faith in a long distance relationship are key,” Lauren said.

Michelle’s advice for a long-lasting relationship is, “Be honest with each other, always communicate any issues, support each other’s goals, and do romantic things here and there.”

“Our secret is that we were best friends first, so we were just a team going into marriage,” Chelsea said.