Emily E. Gonzalez ’21 (née Hunter) and Justin F. Gonzalez ’21 married the summer before their junior year. They tied the knot in Niagara Falls, Hunter Gonzalez’s hometown; flew to Maui for their honeymoon; then returned to Boston to settle into married life in their suite in Pforzheimer House.

“We blocked together, which people say is a big no-no, but it worked out for us,” Emily says.

The couple met for the first time during Visitas, the weekend in April when prospective freshmen visit campus. They happened to sit down at the same table in Annenberg, and then decided to walk to the Coop together to pick up Harvard t-shirts, where they ran into Hunter Gonzalez’s parents. “I actually went to the bathroom with Emily’s dad,” Justin remembers, laughing. “We’re really close now, and I feel like that’s when our bond really started.” 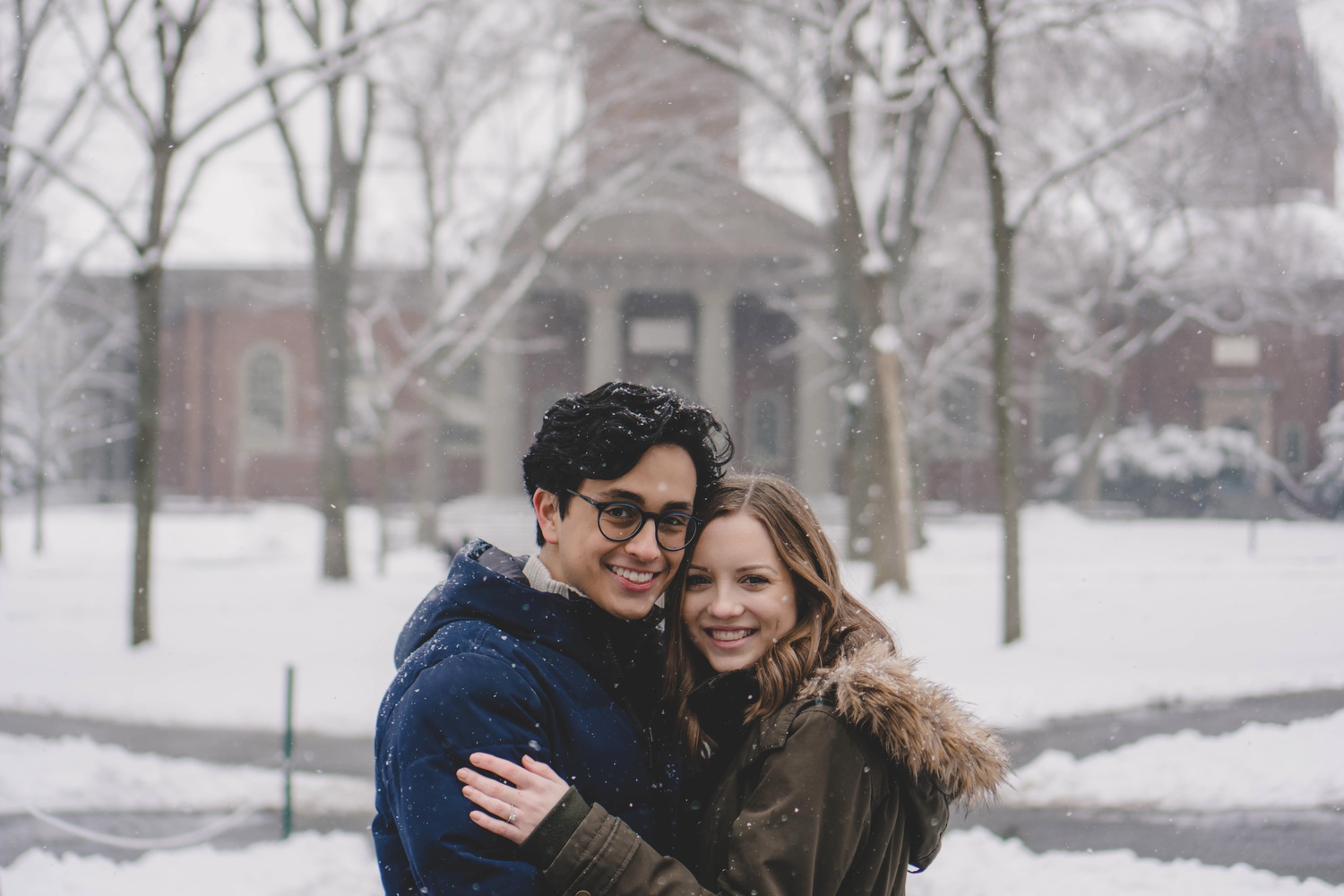 “We knew we wanted to be together forever,” Justin Gonzalez says of his relationship with his wife Emily. “So why prolong the inevitable?” By Courtesy of Justin Gonzalez

The two met again at the beginning of their freshman year, when they both did dorm crew, one of Harvard’s pre-orientation programs. They started dating that fall, solidifying their bond over all-nighters finishing problem sets in Lamont. They began discussing marriage that winter break.

“We knew we wanted to be together forever, and we were going to wait until after college, just because we knew that’s what everyone else did. It’s the more normal, accepted thing to do,” Emily says. “But then we realized, should we really be making a huge life decision just based on what other people think?”

During February of their sophomore year, Justin visited his home in North Carolina, where he had shipped the engagement ring. When he flew back to Boston, Emily picked him up at the airport. Justin thought to himself, “‘I don’t want to wait, I want to be engaged.’ So I got off the plane, I headed down the escalator at Logan, and as soon as I saw her I proposed.”

The couple married in a small ceremony in Niagara Falls, and Emily says there wasn’t much of a change to their everyday college lives after the marriage. If anything, others had a harder time adjusting than they did. “People looked at us a little differently,” Justin explains.

Last March, when students had to leave campus because of the pandemic, the couple moved to Niagara Falls, where they have been living since. Justin works as a software engineer for Amazon. The couple bought a plot of land in Niagara Falls, and Emily plans to spend the next year building a house.

The two say that they don’t regret their decision to get married halfway through college.

“We knew we wanted to be together forever,” Justin says. “So why prolong the inevitable?”

A date had been set, a venue booked. The wedding was to take place in Detroit, Mich. on May 9, 2020. Two hundred fifty guests had already been invited.

But in March of that year, as the world turned upside down and inside out, everything changed.

On March 10, Jadyn K. Bryden ’21 — then Jadyn Broomfield — awoke to the announcement that she would be required to leave Harvard’s campus by the week’s end. Then, on March 15, she received news even more devastating: As the Covid-19 pandemic evolved and worsened, Byden’s chosen venue called to say that it could no longer host the reception for her wedding to William S. Bryden, Jr.

“We were obviously very devastated,” Bryden recalls. “All our plans were in the garbage.”

Bryden had been planning to travel to Costa Rica for spring break as part of a program for young adults; when those organizing the trip decided that they would still go ahead with their plans, she went along. Then, only a few days later, the situation deteriorated. “While I was in Costa Rica, they were like, ‘Yeah, we actually have to deport you from the country because of Covid,” she says.

In a span of only 10 days, Bryden had been forced from campus, her wedding venue, and a foreign country. Then, she and her fiancé had an idea: “Harvard was kicking us off campus until at least the fall back then,” she remembers thinking, “so let’s just get married now.”

Together, the couple called Jadyn’s local pastor in Detroit. He agreed to host their wedding on Zoom, and they circulated a link among their friends and family spread across the country. “It kind of felt like we did a courthouse wedding in a way, which is not what I ever would have expected,” Jadyn says. “I put on a white dress, Will put on a tux, and we did our vows and everything on the call.” 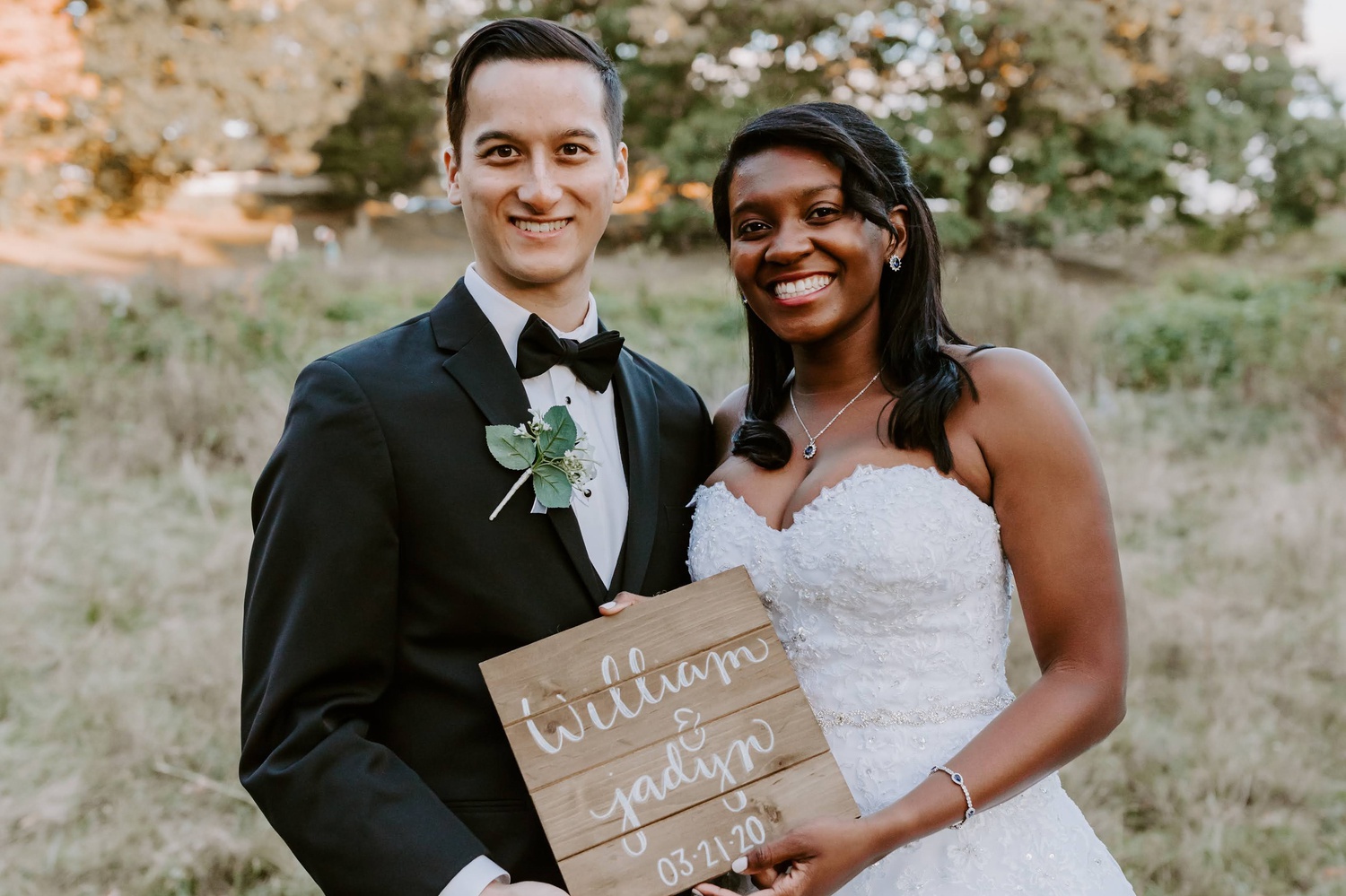 Only 11 days after learning Harvard would require its students to vacate campus, Jadyn K. Bryden ’21 orchestrated her own wedding over Zoom. By Courtesy of Jadyn Bryden

Their wedding, immortalized in a now viral TikTok recorded by Jadyn’s childhood friend and maid of honor Charlotte, took place only 11 days after Harvard students learned they would be required to evacuate campus. “Over the next couple months, we saw lots of Zoom weddings,” Jadyn says. “I’m convinced we were the first.”

Jadyn, a History of Science concentrator in Mather House, and Will, a December 2017 graduate of Johns Hopkins University, first met through a church community group in February 2018. They and their friends would often see movies together, until one evening when all except Jadyn and Will canceled plans to see “Avengers: Infinity War.” Even after the film’s nearly three hour runtime, they elected to prolong their evening for dinner in Boston’s North End. Before Jadyn left Cambridge for the summer, the pair started dating.

“It was a breath of fresh air as I was going through college to be dating someone who was not in the super high stress, high intensity environment,” Jadyn says, recalling Will’s unique perspective on aspects of Harvard’s culture. 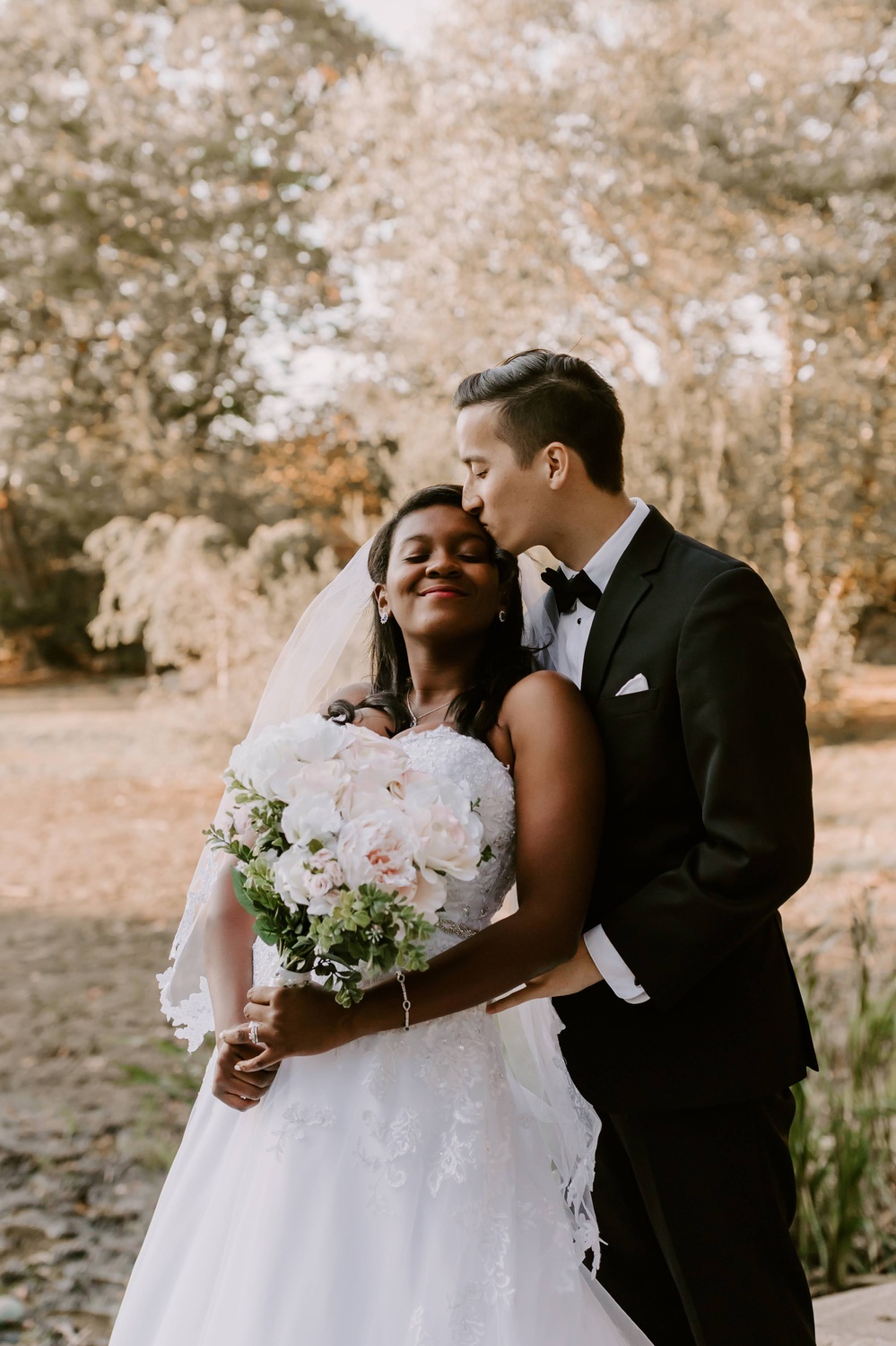 “Harvard was kicking us off campus until at least the fall back then,” Bryden remembers thinking, “so let’s just get married now.” By Courtesy of Jadyn Bryden

For Jadyn, that “breath of fresh air” has continued to animate her and Will’s marriage, even amid the twists and turns of the pandemic. “It’s been the best thing ever,” she says of their married life. “I could not have chosen a better time if I knew about the pandemic,” she continues. Jadyn references how Will would comfort her in moments when she felt overwhelmed by online school work. “It was a really tough year for a lot of people, and to be able to have a built-in support system made me feel extremely blessed.”

Today, Jadyn and Will live in North Cambridge with their new puppy, Zeus. Jadyn has begun work at Xfund, an early-stage venture capital firm. Will works for 6 River Systems, a warehouse logistics and fulfillment company based in Waltham, Mass.

“Starting our marriage in the pandemic allowed for us to have a lot of quality time together, and we now know each other extremely well,” Jadyn says. “It was definitely a blessing.”

Many of Jessica S. Edwards ’21 and Joshua T. Walton ’21’s most cherished memories happened at two in the morning.

One of their earliest memories of getting to know each other is hanging out at Tasty Burger the night after Harvard-Yale. “We just talked until like two in the morning, and then we had our first date not too long after that,” Walton remembers. A few months later, they woke up at two in the morning to take the bus to New York City to see a Broadway show and explore the city. And during the pandemic, the couple traveled to the Boston Medical Center before the sun rose to get vaccinated together. “We went to the Boston Medical Center at 2 a.m. to get a vaccine. We sat there from 2 a.m. to 5 a.m. We watched Les Misèrables on the streets right in front of the Boston Medical Center,” Walton says. “So that was definitely a highlight of the pandemic.” 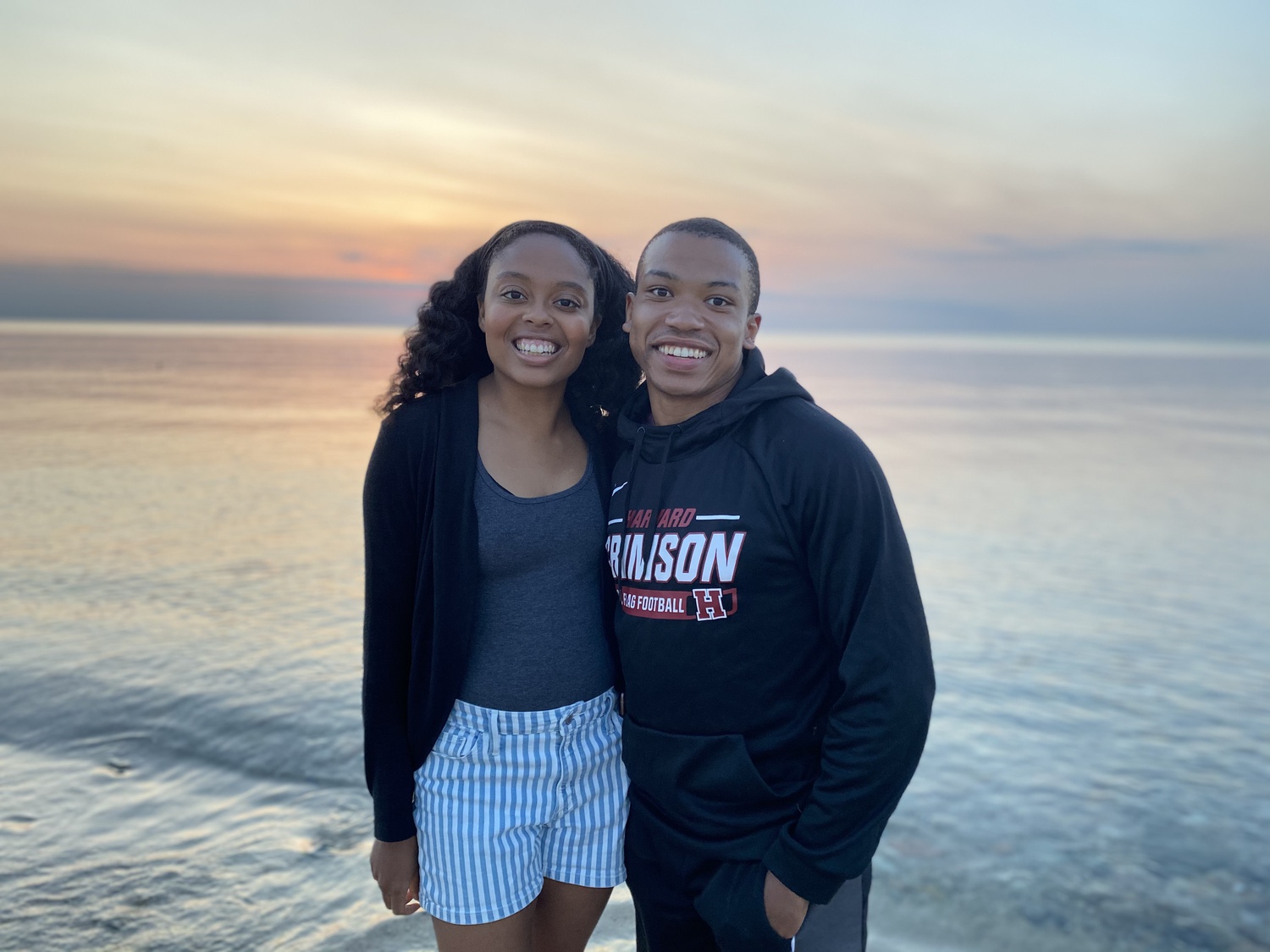 Edwards and Walton met at the beginning of their freshman year through mutual friends. They remember spending time together since they occupied many of the same spaces: They were both members of Harvard College Faith and Action, and they both volunteered with Y2Y, a homeless shelter in Harvard Square. Walton also started attending rehearsals for the Kuumba Singers of Harvard College, of which Edwards was a member. “Through serendipitous interactions with each other we started talking a lot more,” Edwards says. They started dating sophomore fall.

As opposed to their memories of sophomore year, “junior year is a bit of a blur,” Walton recalls. When students left campus last March because of the pandemic, Walton and Edwards went to their home states of Mississippi and Virginia, respectively. The couple took the time apart to more concretely plan their marriage, which they had begun to discuss before they left campus.

Last September, Walton visited Edwards in her hometown of Alexandria, Va., to celebrate their birthdays — and to propose. Walton consulted with Edwards’s parents to figure out the best way to include both of their families. “I have two sisters and a mom, so they were working overtime to help me find the right ring,” Walton says. Walton and Edwards went out to dinner, where Edwards’s parents joined in person and other family and friends joined via Zoom to watch the proposal. 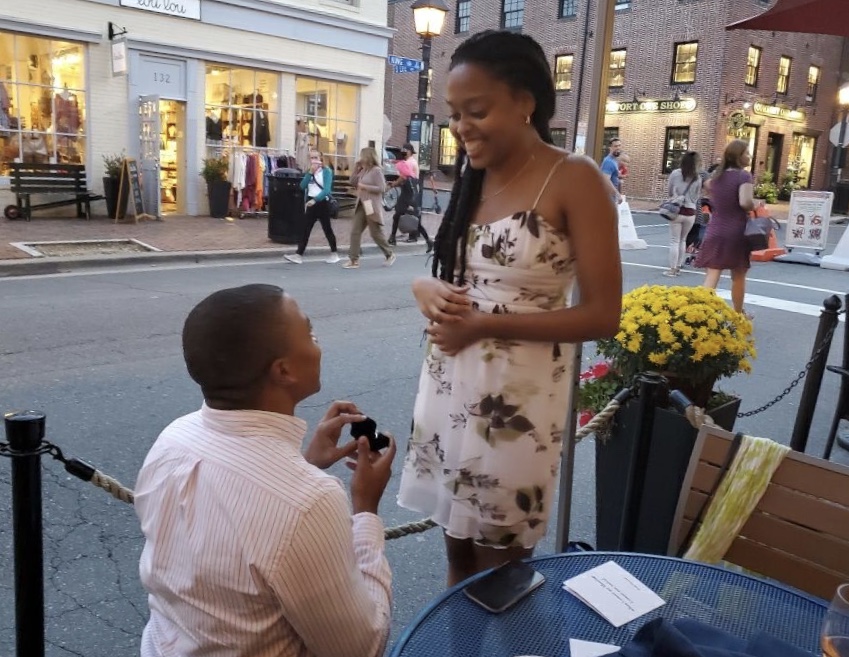 Last September, Walton visited Edwards in her hometown of Alexandria, Va., to celebrate their birthdays — and to propose. By Courtesy of Jessica S. Edwards

After all the planning, the event was relatively straightforward. “And then I proposed at the restaurant, and that’s that,” Walton remembers, laughing. “People cheered and gave us a bunch of drinks.”

The marriage is scheduled for July 10 in Memphis, Tenn. Afterwards, the couple will live together in Washington, D.C., where Edwards will work as a software engineer for Microsoft and Walton will work as a third grade teacher for Teach for America.

At their wedding, Edwards and Walton are looking forward to a lot: dancing, being with groups of people, seeing friends and family they haven’t been able to see since the start of the pandemic. “Over the past year, we’ve been wondering how closely our plans could come to fruition,” Edwards says. “We feel lucky to be able to have as normal of a wedding as possible.”

— Andrew W.D. Aoyama is the Magazine Chair of the 147th Guard. He can be reached at [email protected] Follow him on Twitter @AndrewAoyama.

— Nina H. Pasquini is the Magazine Chair of the 147th Guard. She can be reached at [email protected] Follow her on Twitter @nhpasquini.