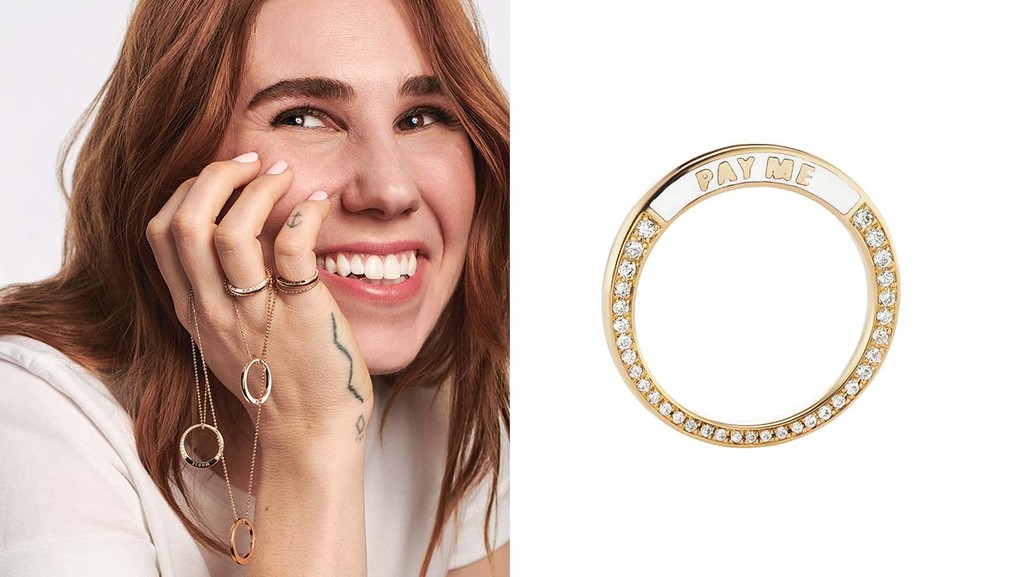 “We wanted to create something that felt like a modern heirloom,” the actress says of her collaboration that is based on her grandmother’s ring.

Fans of Sophie Ratner’s jewelry include Selena Gomez, Elizabeth Banks and Octavia Spencer, but when the New York-based designer met The Flight Attendant’s Zosia Mamet, both women felt a kinship.

“It’s kind of a funny story that I don’t think Sophie would mind me telling – her mom is my manager’s gynecologist, and I’ve heard all these hilarious stories about her,” Mamet says. “At some point [her mom] asked my manager if she had any clients who wanted to wear this cool 1973 necklace that Sophie had designed, and that’s how she and I started chatting. I’d wear her jewelry to events, and a really organic friendship was born, and then it morphed into something different.”

The result: SRJ x Zosia Mamet, a just-released collab inspired by a pearl ring passed down from Mamet’s grandmother, which the actress wears on a chain for safekeeping.

“I never thought I’d be interested in making a ring that also could be worn as a necklace, but when I saw how Zosia was wearing this vintage pearl ring, I loved the idea that we could create something that could be a multipurpose piece,” explains Ratner.

“We wanted to create something that felt like a modern heirloom,” adds Mamet, who also art-directed the collaboration’s accompanying campaign, which includes actresses Adrienne Warren and Ashley Park — as she puts it, “a group of just the coolest women I know.”

Priced from $270 to $1,975, the four-piece collection comprises three stackable rings in combinations of ethically sourced 14-karat gold, black or white enamel and diamonds, which can be personalized and worn separately or together on the hand or a gold chain.

“I’ve used enamel in small ways before, but not to this degree, so there was a bit of a learning curve,” Ratner says. “But for the rings to work as personalized pieces, it’s really important that whatever people choose to write stands out, and there’s no better way to make something pop than when it’s set against a really beautiful enamel.” All pieces are custom-made in Ratner’s New York City studio and require about three weeks to complete.

“We loved the idea of having an inscription,” Mamet notes. “Jewelry holds a lot of power, and for the jewelry I wear, I want it to be a reminder of something close to me. That could be anything from my dog’s name to my husband’s initials or my best friend’s name.”

Ratner and Mamet have been working on the concept since 2019 but delayed the release due to the pandemic. With Valentine’s Day approaching, the duo agreed that the time had arrived. “Everything has been so scary during the past year – but also, personalized jewelry feels even more important right now,” Ratner says. “I feel like the past year has made the concept so much stronger because maybe you’re commemorating the birth of a child, or someone you’ve lost.”

With heirloom jewelry a rising trend among millennials, Mamet agrees that the collection is meant to resonate in much the same way as a vintage ring or necklace. “I’ve always been very intrigued by my generation and how nostalgic we are” she says. “I’ve always loved heirloom jewelry, the idea that you can wear something given to you by your grandmother, and someday you’ll pass it to your granddaughter. With this, you’re creating your own heirloom.” sophieratner.com

A version of this story first appeared in the Jan. 27 issue of The Hollywood Reporter magazine. Click here to subscribe.