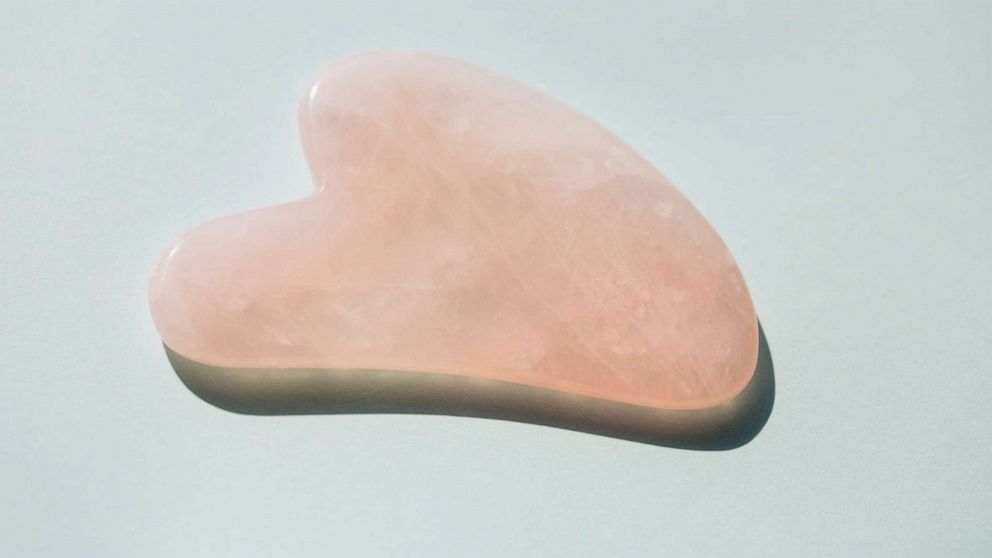 Many beauty trends are born on social media platforms such as TikTok, and if you’ve scrolled lately, you’ve probably noticed some form of gua sha.

While it may be new to many, gua sha is actually an ancient therapeutic healing technique that’s been used in Chinese medicine and throughout Asia for years.

TikTok user Devon Kelley tried a daily gua sha routine for a few weeks and shared a video of her 13-day transformation. It left her with noticeable results that inspired many of her followers to give the technique a try.

Kelley’s post has been viewed more than 16 million times and has over 3 million likes.

“In Chinese, gua sha is literally translated as ‘scraping sand,’ where sha or ‘sand,’ refers to small, red dots that appear on the skin after scraping,” doctor of traditional Chinese medicine and master herbalist Dr. Jenelle Kim told “GMA.” “In Western Medicine, this is called petechiae.”

She added, “Ultimately, this sha is some form of blockage in the body that can be caused by numerous imbalances, including lack of circulation, stress, tension and pathogens, such as viruses.”

One of the most common tools used in gua sha today is a handheld, flat tool with rounded edges. However, Dr. Angela Chau Gray, a TCM practitioner and co-founder of YINA, explained to “GMA” that flat, polished stones, coins, animal horns, ceramic spoons, buttons and even jar lids have been used for this practice in Chinese culture.

YINA co-founder and TCM practitioner Dr. Ervina Wu also pointed out to “GMA” that gua sha was used during the Stone Age.

“As the Chinese headed into the Bronze Age, metallic tools and needles gained favor over stone tools,” said Yu. “Bian stone tools subsequently became ‘Bian Therapy’ along with acupuncture, herbal therapies as documented in “Huang Di Nei Jing,” the most representative Chinese medicine text from 475-221 BC.”

She added, “As a medical tool, gua sha became more widely used around the Yuan (1337 CE) and Ming dynasties, spreading throughout many Asian countries.”

Gua sha tools and what to look for

Experts agree that you should select a tool that you feel most comfortable using, and it doesn’t need to be expensive. “Even a ceramic soup spoon works,” Gray shared.

However, it’s recommended to avoid plastic and use something that’s made with natural material.

Kim shared that her favorite stones for facial gua include jade stone, which is known for cooling, anti-inflammatory and calming properties; rose quartz, since it helps stimulate circulation, facial tension and reduces the appearance of puffiness; and Bian stone, which has been used in TCM for thousands of years. “It is a stone containing trace minerals that are believed to benefit overall health,” she said.

While it’s always best to consult with a skin expert or doctor first, there are beginner-friendly tips that you can try three to four times weekly to get started.

Board-certified acupuncturist Dr. Laurel Liu recommended in a TikTok video that you should start facial gua sha on the back of the neck, within one centimeter of the hairline.

“There are a lot of acupressure points around there,” said Liu during the short clip. “We need to activate the lymphatic drainage first before practicing facial gua sha.”

Step one: Apply a facial oil to allow slip for your gua sha ritual.

Step two: Apply light to medium pressure with gua sha tool, at around 30- to 45-degree angle away from the skin.

Step three: Start from the middle of the face slightly upward and toward the hairline. Use a bit more pressure around the hairline area.

Step four: Try gua sha on the jaw area toward the ear lobe; do this below the chin area as well.

Step five: On the forehead area, move gua sha from the brow upward, toward the scalp.

Some results will be immediate, and others will come with consistent practice.

“Make sure to learn the proper techniques from a qualified practitioner,” said Wu. “We love that so many people are embracing gua sha and we are here to share the beyond skin care benefits of this beautiful time-honored practice.”

While there are many skin care and healing benefits associated with gua sha techniques, experts and practitioners have advised that it is a self-care tool rooted in Chinese medicine — not a new trend or invention.

Gua sha tips for appreciating vs. appropriating, according to TCM experts:

-Acknowledging and understanding that gua sha is from Chinese medicine, and shouldn’t be generalized as “oriental medicine.”

-Learn the difference between appreciation and appropriation.

-Avoid describing the practice with terms such as “exotic” or “mystical.”

“For practitioners of traditional Chinese medicine, gua sha is a technique that requires sufficient training,” said Kim. “It is not simply just about sweeping the tool on the face, it entails stimulating key meridians and specific acupoints.”

She continued: “While gentle at-home use, utilizing proper tutorials, is generally safe and will produce results, receiving treatment from a professional who has mastered the technique will produce the most visible results. A combination of in-clinic/in-spa and home treatment is recommended.”