What happened when I attended the wrong Spanish wedding 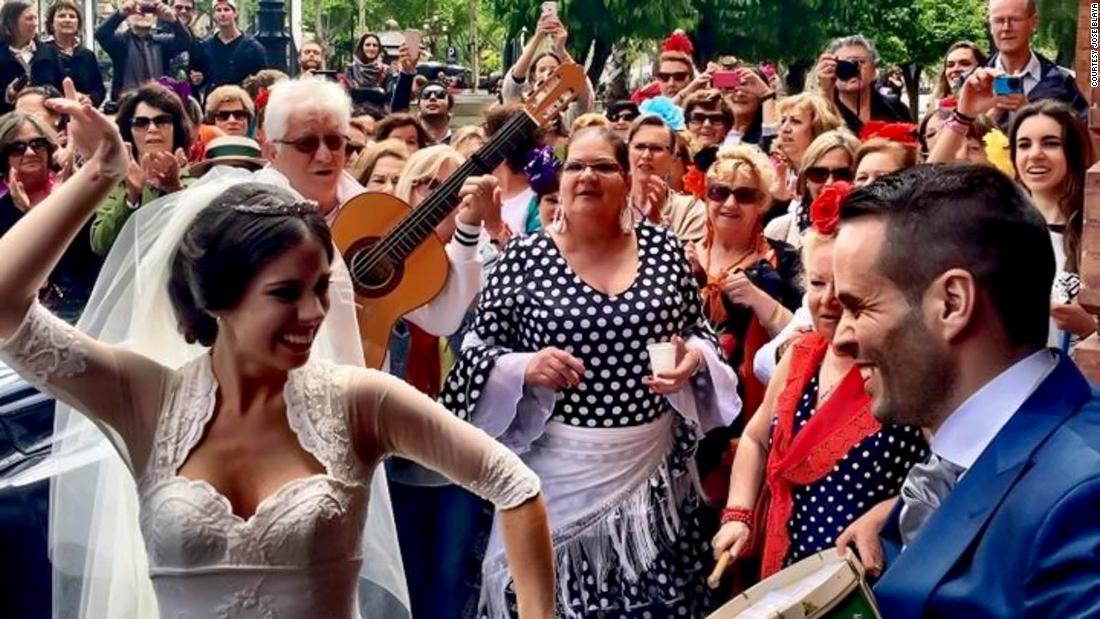 (CNN) — Nicole Hidalgo had been looking forward to the wedding for months.

It was Spring 2016 and she’d traveled from her home in New York to the historic Spanish city of Seville to attend the nuptials of her good friend Jose Blaya.

Blaya and Hidalgo had met six years previously when Blaya had moved from Spain to Hidalgo’s New York apartment. The roommates became fast friends, exploring the city together, hanging out at Manhattan rooftop bars and teaching one another their respective languages.

“It turned out to be a great friendship,” says Hidalgo, the sort where “you kind of feel like you’re related to them right away.”

Now, he was preparing to get married and Hidalgo was delighted to be part of his celebrations, bringing along her friend Abe Wood as a plus one.

The two Americans flew into Madrid, spending a few days sightseeing before heading down to Seville. They were excited to catch up with Blaya and his wife-to-be, María, but they weren’t due to see any of their mutual friends until the big day.

The morning of the wedding, Hidalgo perfected her hair and make-up. Dressed to impress, she and Wood decided to get a cab to the church — they figured it was the easiest option.

“We didn’t know where we were going, and we didn’t want to be late.”

They gave the cab driver the address — a church in Seville’s Triana neighborhood.

When the driver pulled up outside their destination, other guests were already arriving, a riot of colorful hats, smart suits and smiles.

“We were there early, and just by my nature, I talk to everybody,” says Hidalgo. “So I introduced myself to a lot of people, I took pictures.”

Hidalgo snapped shots of bridesmaids wearing flowing red gowns, the glamorous mother-of-the-groom and the ornate interior of the church. She even asked some guests if they’d pose for a picture with her.

Hidalgo is Mexican-American, and she was keen to make the most of the opportunity to speak Spanish.

She asked one fellow guest if they were there for Jose or María. The woman looked at her, blankly, and eventually replied that she was “there for the bride.”

I guess she didn’t understand me, thought Hidalgo, and shrugged it off.

Nicole Hidalgo with her plus one, Abe Wood, at the wrong wedding.

With the ceremony about to start, Hidalgo and Wood, her plus one, nabbed a seat near the front. The two friends posed for a selfie, and Hidalgo glanced around the congregation, looking for familiar faces.

For the first time, she properly took in that she didn’t recognize anyone else present.

She and Blaya had mutual friends, but she couldn’t spot any of them.

And while Hidalgo had never met Blaya’s family members, she’d seen lots of photos. They definitely weren’t there.

“For sure they would be here now, because the wedding’s about to start,” she thought.

Hidalgo felt a sinking feeling in her stomach.

She looked at Abe, who’d picked up on her discomfort. “I’m not sure what we should do,” she whispered. “I have a weird feeling about this.”

Turning around in her seat to see if she recognized anyone behind her, Hidalgo squinted thorough the open church door, looking for the number on the building across the street.

It was numbered somewhere in the 50s. That made no sense. Blaya’s wedding was taking place at number 79.

It was the wrong church.

“We’re at the wrong wedding,” she said to Wood, barely believing her own words.

He looked at her in disbelief.

Dash to the church

Unspoken between the two friends was the same thought: the ceremony was about to start. They needed to leave ASAP and hope they had time to find Blaya’s wedding and make it there before the ceremony began.

They stood up in their seats.

“I felt like we were the loud Americans. We try to get out of the church discreetly.”

Doing their best to ignore the heads turning in their wake, they made it outside. There, they figured out that the right church — where Blaya’s wedding was beginning any minute — must be further down the street.

It was April, but Seville, known for its hot weather, was already humid and sticky. Hidalgo felt her hair start to tangle and her makeup begin to run.

At last, they spotted another church. Outside, they recognized a couple of people smoking on the doorstep: mutual friends.

“We saw them standing outside and just a wave of relief washed over me. I can’t imagine if we flew all that way and then missed the wedding,” says Hidalgo.

These wedding guests greeted the disheveled pair, who breathlessly explained what had happened.

Heading inside, Hidalgo and Abe found seats just in time to see the ceremony.

Nicole Hidalgo has many fond memories of Jose and María’s wedding.

It was a beautiful wedding, says Hidalgo. On a day full of memorable moments — not all of them for the right reasons — one of her favorite memories is the newlyweds’ arrival at the reception: they danced together, a traditional Spanish flamenco.

“It was just so beautiful, and that’s one of my favorite memories. I’m just so glad I got to see that,” says Hidalgo.

The couple had also installed a signpost with arrows pointing in the direction of the different locations their guests had flown in from — from the United States and the UK, to cities across Spain.

Hidalgo stresses that nearly missing a close friend’s wedding was very out of character. She’s a project manager who prides herself on being detailed orientated and planning ahead.

But attending a wedding abroad, she figured just hopping in a cab was best.

Meanwhile Blaya, busy getting married, had no idea what had happened.

“I wanted her to be present on one of the most important days of my life,” he tells CNN Travel. “To be honest, I didn’t know that she almost missed the best wedding of the day until after the ceremony.”

When he found out what happened, Blaya thought it was hilarious. It’s since become a running joke between the two friends.

In fact, it’s a story Hidalgo often ends up telling. Because it has a happy ending, it’s somehow become funnier as the years roll on.

“I took tons of pictures of both weddings. I feel like at the wrong wedding, I’m sure I’m in their wedding album somewhere.”

Planning to protest a Cuomo wedding? You’re 28 years too late