Wedding planning during a pandemic? How 4 N.J. couples dealt with the madness. 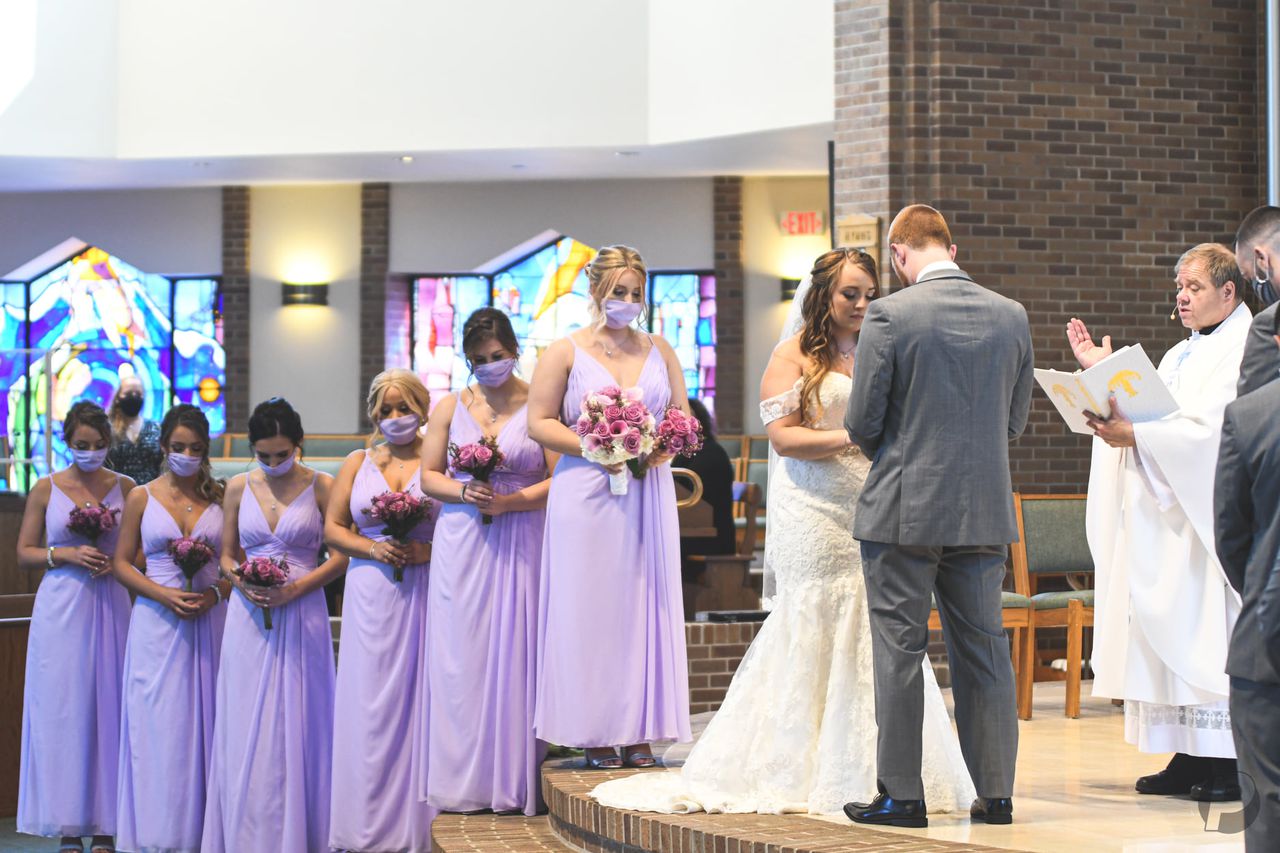 If the pressure of planning a wedding isn’t already enough, just add a pandemic and watch the madness unfold.

For almost a year now, New Jersey couples have been scrambling, rearranging, slashing guest lists and canceling weddings altogether as they navigate trying to host a giant party during COVID-19.

Should we move the dance floor outside? Are we going to have to reschedule this thing twice? Should we just say enough and elope?

Each decision brings anxiety, uncertainty and, naturally, the opinions of all those invited guests.

Here, four N.J. couples talk about how they finally landed on a decision — and whether they’re happy about how they’ve adjusted (or not adjusted) their plans.

Fingers crossed we won’t have to postpone again

It’s been a long time coming.

Stacie Shivers and her fiancé Wil King met at Rutgers and have been together for 10 years now. They were engaged in 2016, and booked their venue for the perfect date, even if it was years out —July 2, 2020 — the Thursday before a holiday weekend

They decision was a practical one, Shivers says, with her fiancé encouraging that they put off the big expensive wedding and instead save for a home first. If only they had known…

They played the wait-and-see game as the pandemic began, and it was May before they made the decision to postpone due to safety — and also because Shivers’ dress, from Kleinfeld’s in New York, wouldn’t be ready, as lockdowns meant she couldn’t be fitted.

Their new date at the Park Chateau in East Brunswick is April 5, 2021, a Monday, because all of the weekend options had been booked years in advance.

“We’re making the best of it because it’s Easter weekend,” Shivers says. “It’s not the nice warm weather we were hoping for, but hopefully it’s not too cold.”

Still, she’s not sure what it will all look like. The capacity limit is 150 people and there are 250 on their guest list, but they don’t want to take folks off of it, because they know many still may not come. They also have invited family and friends from all over the country, and wonder what quarantine rules will be in effect. They’re sending invitations out this week. And crossing their fingers.

Still, Shivers has a nagging thought — what if they have to postpone again?

“What if there’s another lockdown?” she says. “Or, what if days before, people start dropping out? Even if we make it to 150 RSVPs, who is going to say, ‘I’m sorry, I’m looking at these numbers and I can’t.’”

And what are her venue’s policies about postponing again?

“I haven’t asked,” she says. “I think I am scared to, and they haven’t offered. At this point, even if only 20 people show up, I think I’d rather just go ahead and do it.”

Soon to be party of 3

It was a split decision for Kimberly and Christopher Smith — they postponed their October 2020 wedding reception at the Mansion at Natirar to October 2021, but decided the actual marriage ceremony would go on.

“We had fewer than 25 people and required COVID tests for guests,” Kimberly Smith says of their ceremony at St. Genevieve’s Catholic Church in Elizabeth, followed by dinner at Natirar.

It was June when Smith decided to reach out to the venue for options, and she was grateful that they held a date in October 2021, without requiring an additional deposit. Then, they asked that she wait until 60 days before the actual wedding date before fully canceling, to ensure it wasn’t possible to move forward and stay within the state’s guidelines.

Smith was relieved to have a new date booked, but still she worries about what life will be like in October.

“I have mixed feelings,” she says. “I am confident that if vaccinations can be rolled out to the majority of the population by summer, it will happen. But I am worried or uncertain of what ‘happening’ will look like.”

Masks? Distancing? Will people even come, she wonders? And will guests be able to celebrate and have fun or will there be a lot of health and safety concerns?

These are the things that keep her up at night.

But soon she’ll have something else to keep her up — a baby girl, due in July.

Forging ahead, and happy we pulled it off

“Just get married this year and have a big anniversary party reception next year,” was the advice Courtney and Sean Donovan got as their October 2020 wedding approached.

The pressure came from every direction, Courtney Donovan says, including from her own wedding planner. It didn’t help that their wedding would take place in Lakewood, a COVID-19 hotspot, at the Eagle Ridge Country Club.

“It was a hard pill to swallow leading up to the wedding day,” she says. “People were trying to bully us into postponing. Even our planner mentioned a small wedding in Maine and how five people died from it, asking ‘Do you want to have that same situation?’”

She felt so alone she even joined a Facebook support group for other pandemic brides.

“It was just like nobody really understood,” she says, “as a little girl you dream of your wedding being a certain way.”

They forged ahead, cutting the guest list, moving the dance floor and a few tables outside, and letting the chips fall where they may. Two days before, they had a groomsman drop out, but managed to fill his place with another friend who thankfully had the same measurements.

To make capacity limits, they cut out plus ones, but then sent all 180 invitations and had 130 guests RSVP.

“Thankfully people made the tough decision for us,” Donovan says.

There were other obstacles — guests would have to wear masks, even Donovan’s father as he walked her down the aisle. A DJ canceled just weeks before. But in the end, the day went off without a hitch, Donovans says. She feels lucky.

“Because we got married Oct. 2, it fell right in between the waves of COVID. Cases started to uptick again after that,” she says. “I’m grateful we stuck to our guns and it all worked out.”

Our wedding ceremony is now a christening

They were grand plans — a wedding on a mountain in New Hampshire in September 2020.

As the pandemic progressed, Katie Ciarelli and Sean Daniel were still hopeful. Restaurants were still open in New Hampshire. That state wasn’t ravaged the way New Jersey was. It all seemed doable.

Then their wedding coordinator told them they likely couldn’t have a dance floor.

“Sean and I were most excited about the dancing,” Ciarelli says. “We love weddings and we love dancing at weddings.”

When they rescheduled to 2021, Ciarelli says she heard from several people “who were relieved they didn’t have to tell me they weren’t coming to our wedding.”

“I was a lot more stressed when I didn’t know it was canceled,” she says. “We felt like we needed to make a decision but didn’t want to make the wrong decision. The worst part was the not knowing.”

Then, another twist: Katie found out she was pregnant.

“We decided, let’s get married anyway,” she says.

And so they did, in a small ceremony with just close family at her fiance’s grandmother’s lake house, across the street from their venue. It was all so lovely, that the idea of a big wedding started to feel like more trouble than it was worth.

“We tried to cancel the whole thing,” Ciarelli says. “We were happy we got married the way we did.”

But they’d lose thousands. The venue and all of their vendors (except for their florist) would not offer refunds. So instead?

They’ve now planned a really extravagant christening for their new baby. On top of a mountain in New Hampshire. In September 2021.

Ciarelli is a palliative care social worker, who was working with end of life COVID-19 patients and their families before she got pregnant. She helped them with medical decision making, including deciding whether or not to remove a loved one from a ventilator.

It put everything in perspective, she says.

“Weddings really don’t matter,” she says. “They do, but they don’t. There was definitely a lot of stress about what I was going to do, but I always had that perspective at the end of the day that this could be my family.”

Still, they’re keeping a few wedding traditions at the reception. The Harry Potter themed cake must go on. As will father-daughter, mother-son dances, Ciarelli says. And family photos, now with baby included. She says she’s over her wedding dress, which never fit right anyway because she wasn’t able to have dress fittings, and will wear a white cocktail dress.

“People are apparently really looking forward to it because it’s in New Hampshire and they want to get away,” she says. “And everyone’s been cool with it being turned into a christening. We’re just going to have the biggest christening ever.”

Our journalism needs your support. Please subscribe today to NJ.com.