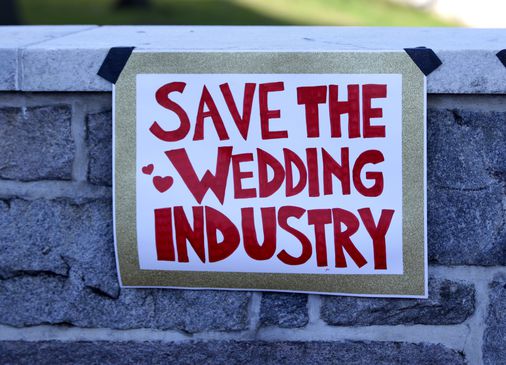 “We talk about it everyday. Do we have it, or do we not?” said Soscia, of West Greenwich. She said some of their guests are considered “high risk” for COVID-19, including their parents.

For Tessa Van Pell, a Warren-based bride planning on 80 guests at Cove Cabin at the Mount Hope Farm in Bristol this June, postponing the big day isn’t an option.

“We’re so financially invested in this wedding. It would be thousands of dollars more,” said Van Pell, who is thinking about adding rapid COVID-19 tests to her planning to-dos.

But even if she’s able to administer BinaxNOW COVID-19 tests on-site, something else still stands in the way: state regulations.

In Rhode Island, catered, indoor weddings are still limited to 25 people and outdoor weddings are allowed to have up to 75 guests. In all cases, masks and social distancing is mandatory and dancing isn’t allowed.

The rules for weddings and other events are in line with many of the other restrictions businesses face in Rhode Island. Shortly after Thanksgiving, Governor Gina M. Raimondo shut down bars, gyms and fitness centers, indoor recreational facilities, and venues of assembly In order to stem rapidly rising COVID-19 infections in the state. Three weeks later, most businesses were allowed to reopen, but with strict capacity limits that are still in place. With some restrictions on restaurants easing, other industry leaders are increasing pressure on the state to lighten up on restrictions, claiming that they are straining their businesses further.

“The state has been nervous about [increasing] the number of people going to weddings. But we’re looking at every angle of what could happen and how we would mitigate it,” said Luke Renchan, a spokesperson for the Rhode Island Coalition of Weddings and Event Professionals, which has been leading the effort to gradually increase capacity limits at structured events to 33 percent of a venue’s capacity.

Renchan, who also owns Luke Renchan Entertainment, said three couples postponed their weddings, again, this week. He said many couples are nervous about scheduling in advance a big day that might not be able to happen as planned because of the state’s rules.

To demonstrate that a very structured, but less-restricted — event could be held safely, the coalition held a mock wedding last week, which was recorded for a training video.

The mock-event’s guests and vendors received a rapid BinaxNOW COVID-19 test at the venue, and then waited in their cars to get the result. (On-site testing would cost hosts approximately $180.) After they all tested negative, guests attended the mock ceremony, cocktail hour and reception— all while wearing a face masks and staying socially distant.

Other states will soon be adopting similar plans for structured events. In New York, up to 150 people can congregate for a wedding starting March 15, as long as all the attendees get a COVID-19 test and the event is approved by the local health department.

Other industries are also advocating for relaxed capacity restrictions. In gyms and sports facilities, one person is allowed to exercise per 150 square feet and social distance is increased to14 feet.

Stephen Lukin owns four Planet Fitness franchises in Woonsocket, Cumberland, Coventry, and Warwick. As new coronavirus cases have just recently begun to slow in Rhode Island, Lukin is asking the state to increase the capacity limit at gyms, and reduce the social distance requirement to six feet. He said he has gone above and beyond the state’s requirements, ensuring that everyone wears a mask properly at all times, and has installing more than 150 plastic dividers so members can use more of the equipment in the gym safely.

But despite the additional safety precautions, the regulations, he said, are impacting consumer confidence.

“We strive to make certain that once a member walks through the door, they are safe,” said Lukin, who has purchased a hospital-grade electrostatic sprayer to help in his sanitation protocols. “We strongly feel that we are an ‘essential business.’”

Lukin did not share specifics on how his business has been impacted financially by the restrictions, but said that being closed for a collective four months over the last year is resulting in a much lower return than in years past.

Raimondo has not taken questions from the press since she was nominated by President Joe Biden to be the Secretary of Commerce. In the meantime, business leaders are turning to Lieutenant Governor Daniel J. McKee, who some consider to be an ally to the small business community.

McKee’s spokeswoman, Andrea Palagi, said Monday the incoming governor is prepared to assess all restrictions currently in place shortly after he is sworn in, and then determine reasonable ways to incrementally increase business, but without increasing new COVID-19 positivity, hospitalizations, or mortality rates.

“There are people that are at higher risk of COVID-19, but the rest of us should be able to continue to live our lives,” said Steven Tripp, co-owner of The TOP Strength Project, a gym in Pawtucket, who said he recently contracted COVID-19 and remained asymptomatic. “Telling us we can’t do something that is fundamentally healthy is just excessive.”