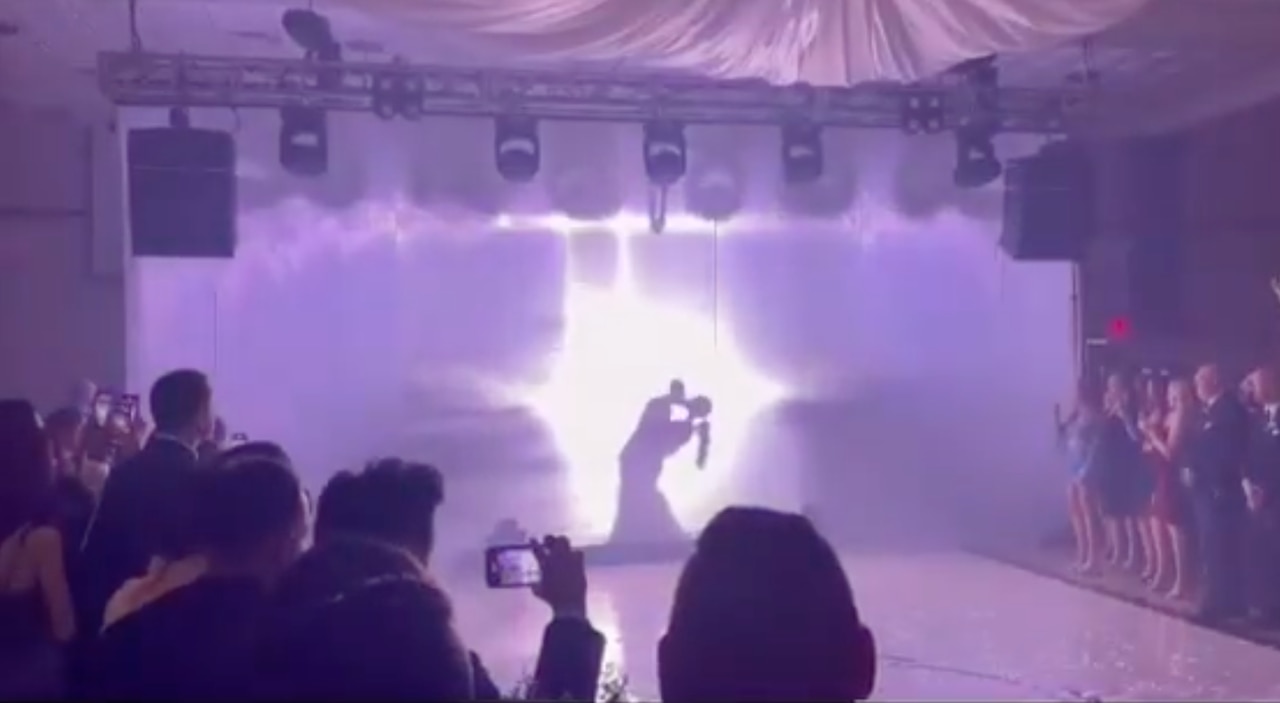 STATEN ISLAND, N.Y. — Nicole and Sean Fink always knew they had a vision for their wedding day.

The Staten Islanders may not have known which flowers to pick for centerpieces, or who they should seat next to one another, but they knew how they wanted to make their debut as a married couple — it was all about creating “a moment.”

“We came up with this idea about two years ago,” said Sean Fink, a longtime entertainer on Staten Island. “It was a combination of efforts, but we really wanted to create a moment. Not just for us, but for everybody. We wanted everyone to have chills and just feel this moment full of music and visual connection.”

The couple’s elaborate wedding reception introduction — consisting of a score by Staten Island producers and artists, graphics and projected images of the couple dancing — has already garnered more than 1.5 million views on TikTok. The couple made their first formal appearance as husband and wife using a projector, which showed images of them dancing on a silk screen before revealing a true silhouette of the newlyweds.

“Creating something like that is so rare,” Fink said. “We accomplished what we wanted, and we couldn’t be happier with how everything turned out.”

The production, which kicked off the wedding at South Gate Manor in Freehold, N.J., was brought to life by Dash of Class Platinum Entertainment, a subsection of Partners in Sound Productions which specializes in weddings; Pro Sho Sound Service, which has merged with both Partners in Sound and Dash of Class Platinum Entertainment to create Merge Event Group; ET Studio Productions founders Joey Martino, Laura Monaco-Martino and Brielle Von Hugel, and family members Viktoriya and David, who created the projected images of the couple.

The couple said major planning went into making the introduction look “effortless,” including working with a lighting designer, filming the pre-recorded projector footage and getting the music just right. Fink said he went to ET Studio Productions with the idea, and it created a cover of Beyonce’s “Love On Top” sung by Brielle Von Hugel.

Fink, who has worked in the event planning and entertainment industry for 15 years (many of them with Partners in Sound Productions), described the experience of being on the other end of party planning “weird,” but when he left it to his coworkers at Dash of Class Platinum Entertainment, he said, “They knocked it out of the park.”

Online reactions have been positive, commending the couple for their creativity and execution. One commenter wrote, “I need friends that are this extra.”

“The curtain drop is everything!” another person wrote. “They’ll never forget that moment!”