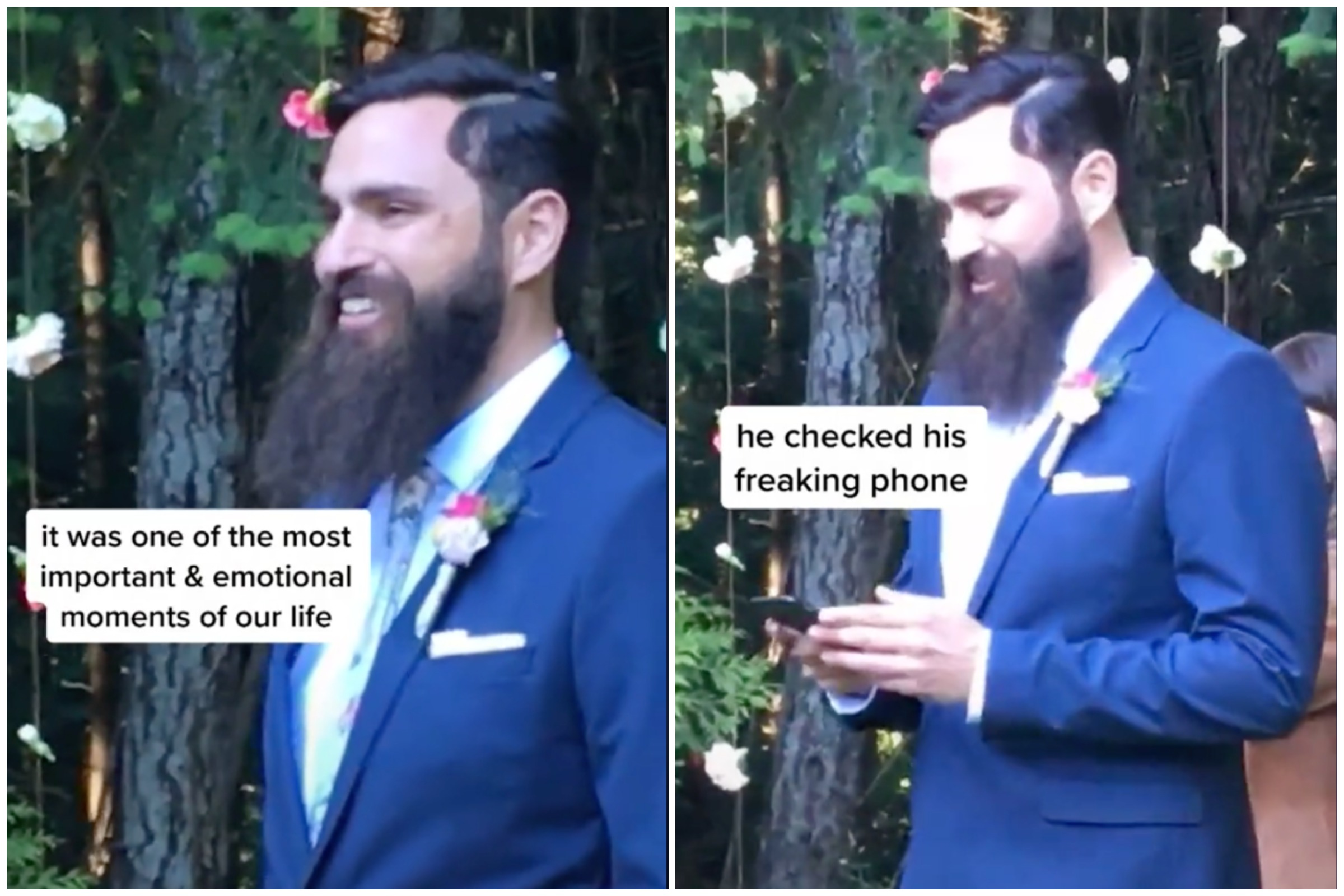 In a humorous tribute to her four-year wedding anniversary, one woman on TikTok shared a clip from her nuptials that has viewers locked in a heated discussion. In the video, Taylor Loren’s now-husband is shown checking his phone during one of the most important moments of his life: as his wife-to-be walks down the aisle.

“4 years ago today I walked down the aisle to marry the love of my life,” wrote Loren in the video’s onscreen text. “It was one of the most important & emotional moments of our life,” she continued, “and my husband did the most romantic thing…”

Suddenly, the groom—who had been smiling at Loren as she presumably walked down the aisle—pulls his phone out of his pocket and gives it a quick glance. “He checked his freaking phone,” wrote Loren.

The video has clearly resonated with viewers: in five days, it’s been viewed over 2 million times with over 260,000 likes. And while Loren’s intent with the post was clearly comedic, many TikTokers have taken to the comments section to debate the groom’s blunder.

Many, for example, thought checking his phone at such an inopportune moment was simply a sign of nervousness. “I do that when I’m nervous,” explained one commenter. “I always pull my phone out.”

“You can tell he is nervous,” wrote another. “It’s a big moment.”

Several other viewers echoed that point, calling it “an anxiety reflex” or a “tic.” Some even went so far as to say it was the groom’s reaction to the emotional moment and him”[trying] not to cry.” Others, meanwhile, thought “he was…making sure he had his vows ready.”

Not everyone, however, was as generous with their interpretation, calling the behavior a “red flag” and “suspicious.” Another simply wrote, “Divorce,” and many half-jokingly claimed that they would “turn around” if their partner did something like that at their wedding.

“I have a CONSTANT battle with my husband and his phone,” explained one viewer. “I would’ve walked right back up that aisle lmao.”

“I would have probably turned around and walked home,” said another.

For some, the real question came down to why someone would need to check their phone mid-wedding in the first place: as one commenter wrote, “Literally…everyone is there. No reason to check the phone.” Viewers jokingly came up with their own theories to explain the badly-timed phone glance, ranging from sports scores and stocks to “checking on the boys.”

Loren, however, appears unfazed by the debate, explaining to one commenter that her now-husband “was sooooo nervous” and she “thought it was funny.” Newsweek attempted to contact Loren for additional comment but did not receive a response in time for publication. However, a follow-up video posted to her account proves even further that the pair sees the humor in the incident.

“Babe,” Loren says to her husband in the update video, “TikTok wants to know why you were checking your phone while I was walking down the aisle.” Replying with a smirk, he jokes, “‘Cause crypto never sleeps.”