Venezia & How Fashion Became the New Winning In Football 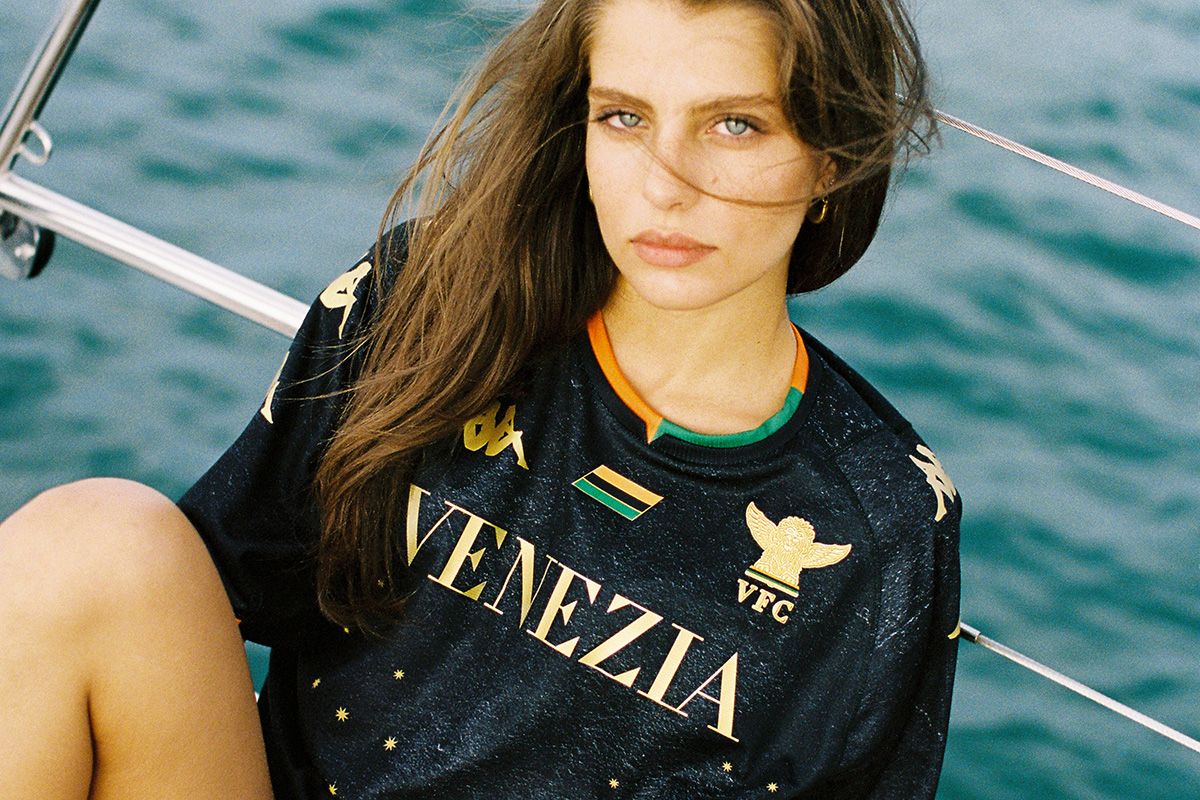 Football has a long-standing, if notsomewhat idiosyncratic, relationship with fashion. Although the sport itself didn’t have much of a reputation for style for much of its history, the game’s supporters have put a premium on designer brands and dressing well since the 1970s at the very least. It could be argued that, in a way, the football-fanatical Perry boys and casuals were prototypal streetwear heads.

Yet it wasn’t until about a decade ago that sportswear manufacturers and football clubs began to realize the potential in using fashion as a marketing tool. Now, however, certain clubs have started to construct their entire identities around fashionability as a means of building a global profile and pulling in new supporters.

Umbro’s 2012 collab with skatewear titans Palace was the catalyst for this trend and many others, from Supreme to Patta, have since followed suit. But these examples all came from outside of the sport, rather than the clubs themselves. Sure, there was Real Madrid’s 2014 collaboration with Yohji Yamamoto, but that appears to have been a short-lived flirtation rather than a fundamental change of strategy. These days, however, the sport’s stylistic turn is increasingly coming from inside the boardroom rather than the culture around it.

The most obvious example of this phenomenon is French powerhouse Paris Saint Germain, which has gone about signing superstar players like Neymar, Kylian Mbappé, and, most recently, Lionel Messi, all of whom scurry around the pitch wearing Air Jordan jerseys. The products of many sportswear manufacturers, like Macron or Joma, for example, are disgustingly utilitarian and make any non-athlete who wears them look like an overfed P.E. teacher. But PSG’s slick Air Jordan garms have taken some of the best elements of athleisure and created merchandise that’s more than acceptable to wear in public.

This combination of fashion and celebrity worship has propelled PSG to superclub status despite the fact that it hasn’t won a single Champions League  — the ultimate prize in club football. But it’s arguable that in this day and age, this matters less than ever. Turning a club into a lifestyle brand is just as effective and perhaps more profitable than spending billions to accumulate trophies in the way that less style-conscious teams like Chelsea and Bayern Munich do.

Once upon a time, supporters chose their teams based on their on-field successes or a family tradition of supporting a local club, but style has become a major new factor in football fandom. This presents a fascinating new seachange in sport. Where clubs like Liverpool and Manchester United have built their myths on long periods of sporting dominance, fashionability has undeniably become an alternative blueprint for success. But while only the richest clubs are able to win silverware year after year at astronomical expense, smaller teams are now able to use style to punch far above their weight.

The best example of this is Venezia FC, a small, largely anonymous club from the Italian city-slash-tourist attraction of Venice that has spent most of its history in the lower divisions and won its one and only significant trophy way back in 1941. Venezia returned to the top flight of Italian football this season after 19 long years in the lower echelons of the national league, a period in which it actually went bankrupt. This on-field success has also coincided with a complete rebranding of the club, which might not be entirely a coincidence.

After several years of partnering with Nike, during which the club became associated with bold designs that substituted the ghastly shirt sponsors that so often ruin football kits with the words “Venezia Football Club” emblazoned across the chest, VFC switched suppliers to Kappa, who have arguably produced the most fashionable line of football merchandise on the planet.

Aside from the ultra-classy black-and-gold home shirt that was launched in a gorgeous editorial that paired backdrops of Venice with models that you can fall in love with, Kappa has also created tracksuits inspired by the brand’s 1990s heyday when Italian teams played the best football in the world. Nostalgia is a significant currency in football and Kappa imbues Venezia with an authenticity that can appeal to both fashionistas and legacy fans. The club has even gone so far as to develop a social media strategy that mimics the aesthetic of glossy fashion magazines, which makes its Instagram feed feel like a cross between MUNDIAL and Vogue. According to the Guardian newspaper’s Italian football correspondent Nicky Bandini, all of this has been part of a well-structured plan.

“That move to make a designer kit was something that started under the previous president Joe Tacopina,” Bandini recently told the Guardian Football Weekly podcast. “I know when [Tacopina] was there it was a very deliberate idea of ‘we need to tap into the fact that we always have tourists in our city that these people are going to want to come to see a football game.’

What do you want to buy when you come to Venice? You could buy a T-shirt that says ‘I went to Venice’ or you can buy a football shirt that’s cool.”

By adopting a fashion-centric approach to marketing, Venezia and PSG are fundamentally trying to achieve the same goal in their own unique way, which is to overcome the structural limitations to success that both clubs are faced with. Of the big five football leagues in Europe, France has been traditionally regarded as the lowest in quality. It would come as little surprise if most of the Parisian club’s new legion of fans even bother to tune into domestic matches and instead only watch the team when it plays in the Champions League. Its Qatari owners clearly understood they needed a unique selling point stronger than countless wins against minnows. Fashionability serves precisely this purpose.

Venezia, meanwhile, finds itself on the other end of the economic scale. With its tiny stadium that seats a mere 11,150 spectators, VFC has few routes to boost their revenue, which thereby limits what the team is able to achieve on the pitch. Distilling its desirable geographic location through a fashion lens is an ingenious way of creating a new income stream.

Although not nearly as well-developed as Venezia or PSG, other clubs like Inter Milan have clearly recognized the power of fashionability in modern football. Inter might be one of the most illustrious names in the European game, but only recently has the Milanese side has been able to consistently compete with rival Juventus for trophies. In response, it seems to have focused on drawing attention to itself by putting out some of the most eye-catching lurid shirt designs in the game.

Last season, it transformed its iconic black-and-blue stripes into tyre mark-like zig-zags, while this year its home shirt seems to have been inspired by the sort of snakeskin boots you’d sooner expect to see in a strip club than on a football pitch. The fallen North London giants Arsenal, on the other hand, has sought to distract from its descent into mediocrity by going full hypebeast: earlier this year, the Gunners paired up with LA boutique 424 on a capsule collection that finally gave its fans something to cheer about.

Traditionally, winning has always been the be-all-and-end-all for sport, but according to Diego Mosconi, a former designer for Supreme and the head of creative studio Fly Nowhere, which was hired by Venezia to rebrand the club, that no longer seems to be the case.

Mosconi believes that modern fans take a much broader view when picking their allegiances. “I suppose some football purists may look at football simply as good players plus win games
equals win fans, but this doesn’t really do justice to the level of complexity of today’s international football fans, who analyze every level of the game, from the owners to the finances to the sponsors and kits,” says Moscosoni. “You could also easily find the exact opposite to be true as far as winning fans or fame; take Atletico Madrid as one example, they have over-performed to the maximum, on the pitch they couldn’t be asked to achieve more with what they have. Off the pitch though, they are still less known in the US and major global markets than West Ham United.”

If the last decade is anything to go by, the nature of football fandom is changing, which is pushing clubs to up their game in terms of fashion and style – which can only be a good thing. So on that note, forza Venezia!

‘The higher the better’: Why platforms are back in fashion

Zendaya Had Another Sublime Vintage Fashion Moment In Roberto Cavalli