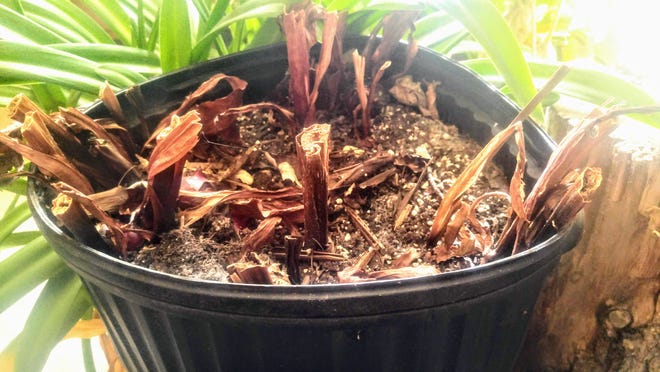 It’s hard to believe now but it wasn’t too long ago when canna lilies were rejected by most gardeners. They were very popular during the Victorian era, but quickly lost their appeal sometime around the early 1900s.

Then about 20 years ago, they started to become popular again, probably because of  the introduction of new varieties. I remember when Tropicanna with its colorful foliage and other varieties with showier flowers were fairly new and somewhat hard to find.

The new cannas made the old-fashioned varieties we were growing look pretty pale in comparison. Since then there has been no turning back — there are now more than 400 varieties of cannas.

Canna lilies’ upright growth makes them the perfect candidate to add vertical interest to the garden. They can grow 5 or 6 feet tall, or even more depending on the variety and soil conditions. Typically, they are used at the back of large gardens and at the center of smaller gardens or containers.

Some varieties are shorter, making them more suitable for smaller spaces or planters.

Actually, given a large enough pot, the tallest varieties can be quite striking on a deck or patio. Imagine a 6- foot-tall flowering plant growing out of a 2-foot-high pot. At one site, I used a dozen or so large containers with tall cannas, it was pretty impressive.

Cannas are hardy to Zone 7, which puts them a little out of our range for hardiness —  meaning they will not be able to survive a typical Michigan winter. That’s OK hough, we can grow them as annuals and they are perfectly happy growing during our summers. However, if you want to grow your plants again next year, you’ll have to dig them up and store them over winter. Otherwise you can purchase new roots every year.

Overwintering can be as easy as simply leaving the roots in the pot they were growing in, if they were potted. Plants growing in the ground are carefully dug up after the first killing frost and their roots stored in boxes or crates until the following spring.

Now’s the time to start shopping for cannas, as growers have sent out their catalogs and updated their websites.

Looking through all of the choices is a big part of the fun of gardening during the off-season.