The worst and most wonderful corrections from the NYT weddings column. 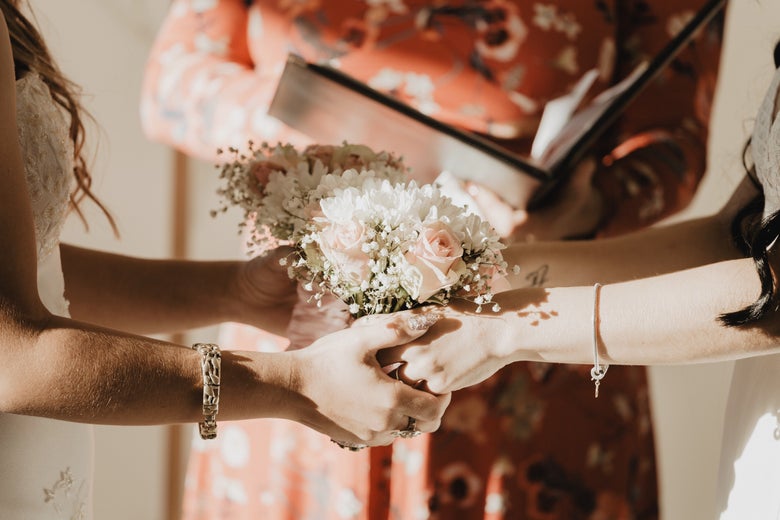 The New York Times recently announced it is hiring a weddings editor to cover topics related to “how we meet, date, marry and separate.” In addition to other requirements, the job description says that the editor needs to be “highly skilled at hard fact editing.”

That might sound a bit odd, but Vows, the much-loved and much-hated Times column about “How couples got from dating to ‘I do,’ ” has had to issue some notorious corrections over the years. Many times, the corrections are relatively small: misspelling the name of a restaurant where the couple met, or mixing up the year they began dating, or stating the wrong religious affiliation of the officiant. But sometimes, they are doozies. As the Times’ new job description reads, “If you think that the D.C. bureau or the politics desk deals with people lying to them or hiding facts, wait till you start asking someone about their dating history.” To celebrate this beloved institution and its even more beloved mistakes, here are some of the best corrections we could find from the column.

The Relationship That Started as an Affair

On Aug. 7, 2020, Vows profiled Lauren Maillian and Robert Palmer, a couple who met at a New York Sports Club in Harlem in 2017 and married three years later. Their wedding happened during the pandemic at the Museum of Contemporary Art in Westport, Connecticut, with 25 guests in attendance. It was a nice, straightforward story—except it said that Palmer hadn’t been married before. Before long, the New York Post published an article by his ex-wife titled: “I Found Out My Ex Cheated on Me—From His Wedding Announcement.” Oops. According to her, the timeline of the Vows article had made it clear that the newlyweds’ relationship had started before the groom divorced his first wife. Four days after the Vows publication, the Times issued a rather understated correction: “An earlier version of this article misstated the previous marital status of the groom, Robert Palmer. Mr. Palmer had previously been married.”

The Designer, the Father, and the Song

In 2013, the New York Times made three corrections related to a Vows story. First, the article got the wedding dress designer wrong by a letter, reporting it as “Azzaro” instead of “Lazzaro.” It also corrected the name of a Daft Punk song played at the ceremony, from “Get Funky” to the real “Get Lucky.” More critically, the piece incorrectly stated when the groom’s father died—it happened before the groom was born, not when he was a baby.

The Ring With How Many Stones?

This one is, by far, my favorite. At the end of a Vows story written in October 2016, a correction states: “A listing of highlights about the wedding of Cassandra Ilich and Shaun Reed, featured in the Vows column last Sunday, misstated the number of stones in her engagement ring. It has nine stones, not seven.” Vivian Lee, currently Cairo bureau chief for the New York Times, tweeted at the time: “An extremely Vows correction,” to which a user replied: “Thank God. I thought they had fallen on hard financial times.”

The Groom and the Exoplanets

An article from 2015 about the wedding of two astrophysicists got another number wrong—one that would have been particularly important to the married couple. The article quoted the groom as saying that he is part of a group that had discovered 10 exoplanets (that is, planets outside our solar system). It then noted that he said only about two dozen exoplanets had been confirmed at the time. In fact, the correction said, he hadn’t said that was the total number of exoplanets confirmed. Instead of two dozen, “in all, more than 1,500 exoplanets have been confirmed,” noted the correction in 2015. (And today, more than 4,000 exoplanets have been discovered.) Can you imagine the groom worrying that his co-workers would think he didn’t know how many exoplanets had been discovered?

At the end of an article from the same year, we read that a previous version misstated the number of objects that the bride collected to decorate the wedding. It originally said she had gathered 100 bottles, but in fact it was more than 250 bottles and glass jars. The column also wrongly said that the couple met in a bar in Brooklyn, instead of Manhattan. (I would love to see the email that I imagine the bride sent for the correction, complaining about her decoration work being reduced at half.)

The Refugee Camp and the Money

A Vows column from 2013 said incorrectly that the bride’s parents met at a refugee camp in West Germany, when they actually met at a camp in Hong Kong. (They moved to West Germany later.) But the error that for sure caused many discussions in the family was the amount of money that the bride’s parents had upon arriving in the United States. The Times wrote that they came with $10—instead of $10,000.

My second favorite. In an article from 2020, two names—that of the actress who introduced the couple and the wedding officiant—were misspelled.

But that’s nothing. The column also mentioned that the bride was “currently starring in her own adaptation of Bram Stoker’s ‘Dracula,’ an Off Broadway production running at the Classic Stage Company, that she described as ‘a feminist revenge fantasy.’ ” I am from Romania, and I am used to having foreigners immediately mention Dracula upon meeting me. So I laughed when I read the final correction on this one: “Also, the author of ‘Dracula’ was incorrect. He is Bram Stoker, not Jane Austen.”

Planning to protest a Cuomo wedding? You’re 28 years too late