The Terrifying Resurgence Of Y2K Fashion 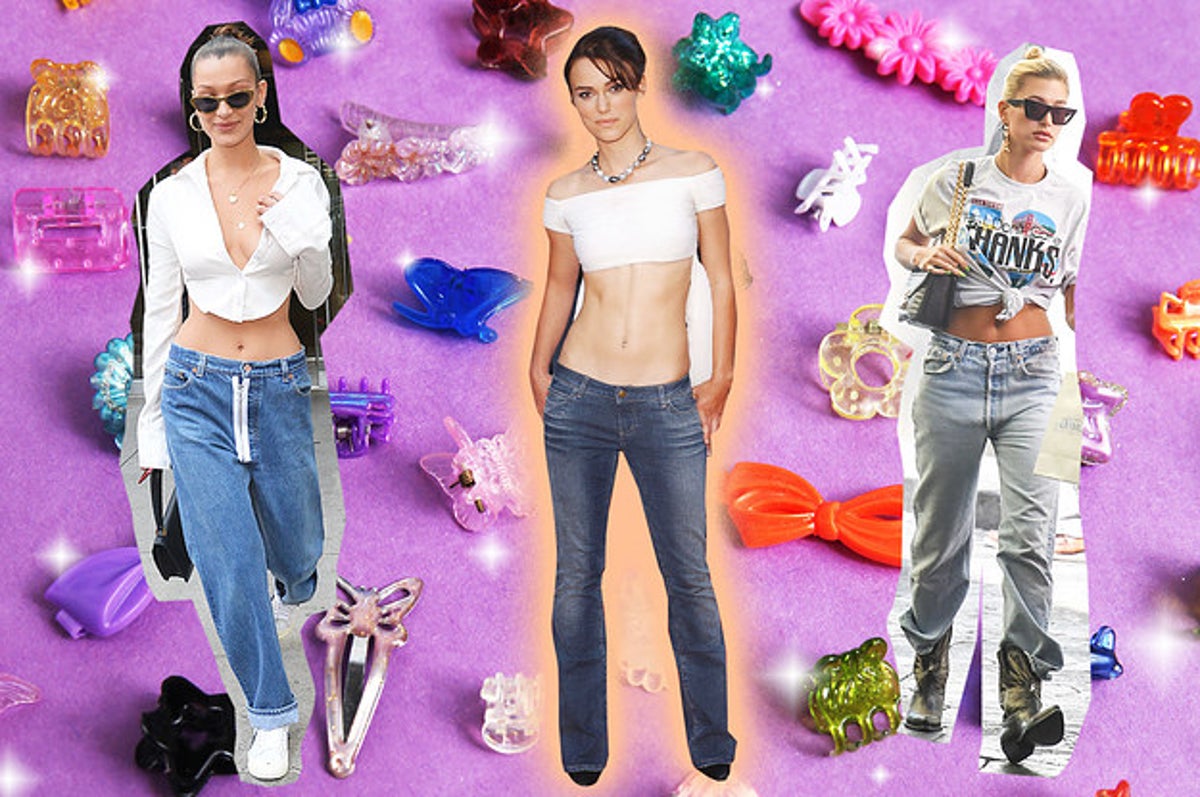 I first sensed it last summer while trawling the resale app Depop for platform sandals and funky-colored windbreakers to treat my midpandemic malaise. Browsing teenagers’ closets has started to make me feel very “how do you do, fellow kids” — inspiring in me the same sheepish embarrassment I get whenever I open TikTok — as is the case, I think, for many millennials on the internet these days. We are no longer, as a generation, a cultural flashpoint, and with our increasing irrelevance and decrepitude we’ve had to accept that this is Gen Z’s world now; we’re just making feeble attempts to coexist in it.

I’m typically on the lookout for vintage pieces from the ’80s and ’90s — or earlier, if I’m lucky — and there are gems to be found on Depop, which is a younger, hipper alternative for secondhand shopping to more normie apps like Poshmark. But I’ve increasingly noticed that the pieces winding up on Depop’s Explore tab are captioned by their savvy sellers with “sooo y2k!”

I realized with mounting horror that, for the first time in my life, vestiges from my own teenagehood have now become desirably retro: Paul Frank baby tees, lacy camisoles, flouncy miniskirts, low-rise Guess jeans. And I’d like to think that my sense of despair at this unfortunate turn of events has less to do with the fact that I’m being forced to acknowledge the passage of time and that, with every minute of every day, I am that much closer to my own death. I mean, obviously that’s a factor! But more significantly, I think, for me and for many of my friends attempting to clothe themselves right now, the resurgence of mid-aughts fashion is so dismaying because most of it is really effing ugly.

Ed Hardy shirts were monstrosities back in 2006. We knew that even then!! Did I blow three waitressing paychecks on a single bedazzled long-sleeved T-shirt with, I don’t know, a horse or something on it that year? OK, yes, but I did regret it almost immediately afterward. Other trends weren’t as obviously atrocious to me at the time but in retrospect are completely galling: Why did we wear flared jeans whose tattered hems were constantly dragging through the mud and threatening to trip us? Why, when I went to a Simple Plan concert at 14 years old — which was, at that point, the best night of my life — did I think I was embodying the height of fashion because I layered an Abercrombie miniskirt over a pair of American Eagle jeans and punked it up with a studded belt? Why were we constantly wearing belts around our waists that served no actual purpose? Why!!!

Perhaps no single trend’s return terrifies millennial women more than that of the low-rise jean — especially for those of us whose bodies never lent themselves well to heroin chic.

Like a tragic number of teenage girls, I hated my body for most of middle and high school. Not only were broad hips and a big ass yet to be crowned a (white, mainstream) beauty standard by the Kardashians’ popularization of Black aesthetics; my curves quite literally would not fit into most clothing readily available at the time. I’m sure I’m not alone in feeling haunted by the daily terror of potentially exposing my asscrack to the cute boy behind me in math class. I envied my peers, not to mention the celebrities they emulated, who could wear crop tops above a long swath of belly, hip bones exposed, because I was forced to have at least a cami tucked in at all times, deputized to do the butt-covering work my pants reneged on. There was plenty of denim pooling around my Converse sneakers that might have made more sense up top, actually covering my physical form.

Three years ago, Sarah Spellings at the Cut interviewed trend forecasters who predicted the low-rise’s return by 2020, and it was widely condemned on social media. Why on earth would people put themselves through that hell again? We were sure it couldn’t — wouldn’t — happen. But the aughts are back, baby, and they’re back with a vengeance.

And yet, as internet culture expert Rebecca Jennings smartly noted in a piece at Vox last month, “People tend to forget how much they used to hate the things they love.” Not too long ago, she notes in her story — titled “Low Rise Jeans Are Back. Don’t Panic.” — the idea of jamming yourself into a pair of high-rise Levi’s seemed just as implausible and unattractive to many of us. I still vividly remember when my punk friends and I were the only people in town who wore skinny jeans before they started suddenly showing up in storefront windows at the Gap. Trends come and go, and reinterpretations of decades past are just that: reinterpretations. Which, in the case of Y2K fashion, will hopefully “incorporate what women have enjoyed about the past decade — a wider acceptance of different body types, greater availability of plus-size clothing, more fat representation and activism — along with the undeniably fun maximalism of the 2000s,” Jennings writes.

So I am trying not to panic. But it’s hard! Addison Rae, a 20-year-old TikToker and one of the most famous people on earth, about whom I know literally nothing, wore a Christopher Esber look last weekend at the MTV Movie & TV Awards that had me and lots of other Olds grimacing into our phone screens. People on social media were up in arms about the barely there bandeau top, but it’s the weird waist clamp and low-rise maxi skirt that did me in. You deserve better than this, people!

But maybe teens shouldn’t listen to me, or to any of us. “Stop trying to warn Gen z about the dangers of low rise flared jeans,” writer Anna Fitzpatrick recently tweeted. “This is a lesson they must learn on their own. … Do you want to be the scolding teacher or the cool (but not too cool) aunt? The time has come to make a choice.”

OK, fine. Do what you want, Gen Z. But I want to put out into the universe that I’m hoping clothes for adult women don’t all go the way of the trash fires of the ‘00s. Have you started shopping for formalwear for Hot Vax Girl Summer yet? Good luck trying to avoid flashbacks to tearful trips to the dressing room on the eve of your senior prom — because asymmetrical cuts, lots of ugly ruching, and chain belts for no reason will be there to greet you.

If Gen Z’ers want to romanticize a decade many of them weren’t even alive in, all the power to them. But those of us who suffered through the 2000s shouldn’t have to go through all that again. I’m praying low-rise jeans become just one option of many, rather than ubiquitous and unavoidable, or else I’ll finally have to make good on my threats to abscond into the woods and/or a lesbian commune where I’ll exclusively wear muumuus and never have to worry about crack-flashing a man ever again. Amen. ●