The significance behind Meghan Markle’s jewellery in Vax Live video 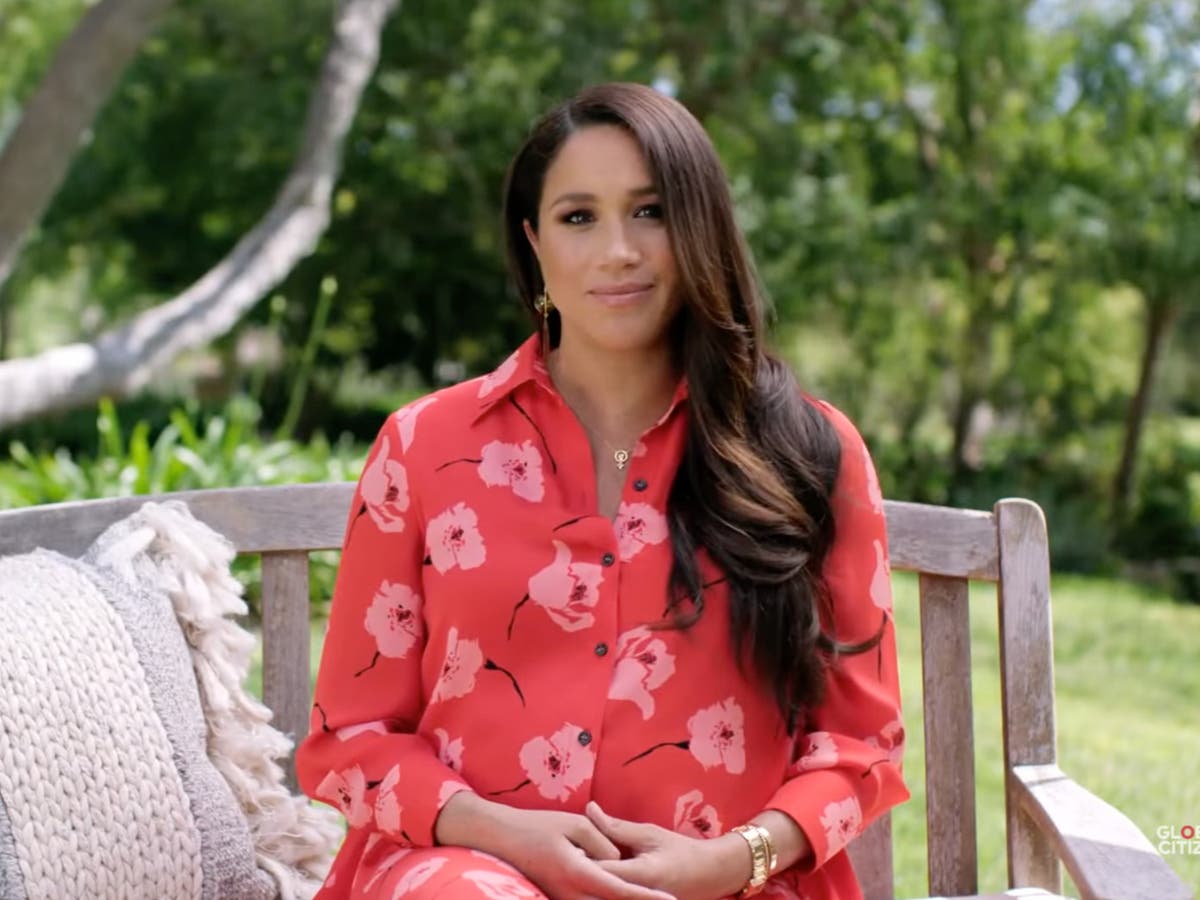 Meghan Markle chose meaningful pieces of jewellery for her first TV appearance since her and Prince Harry’s bombshell interview with Oprah Winfrey.

During Saturday’s airing of Global Citizen’s VAX Live: The Concert to Reunite the World, the Duchess of Sussex, who along with Prince Harry acted as a campaign chair for the event, appeared remotely to share a video message with viewers about gender and vaccine equity amid the ongoing pandemic.

For the appearance, which is believed to have been pre-recorded at the couple’s home in California, the duchess, who is currently pregnant with the couple’s second child, a daughter, chose a $1,690 red floral Carolina Herrera dress.

When it came to accessorising the look, Meghan chose important pieces of jewellery, with the duchess sending statements with both her necklace and her watch.

Meghan’s Woman Power Charm Necklace was from brand Awe Inpsire, and featured a gold charm showing a raised fist with a purple amethyst set inside the symbol for female, with the description noting that amethyst is “a protective stone associated with abundance and enlightenment”.

According to the brand, core to its mission is “giving back aggressively to women most in need of support and assistance”, with Awe Inspire noting that it donates 20 per cent of all proceeds to its charity partners.

In addition to selling the necklace as a standalone piece of jewellery for $140, the brand also offers it as part of a Kamala Harris + Woman Power Necklace Set, which retails for $285 and includes a gold coin necklace etched with Vice President Kamala Harris’ face, in honour of her becoming the first female vice president.

According to the brand’s website, the necklace set benefits Emily’s List, a “political action committee that aims to help elect Democratic female candidates in favour of abortion rights to office”, by donating a portion of proceeds.

“We are honoured to join forces with Emily’s List to help get more women elected to national, state, and local offices this year,” the necklace description reads.

The necklace was fitting as it aligned with the duchess’s speech, in which Meghan discussed the various obstacles currently facing women, including “the surge in gender-based violence” and “the increased responsibility of unpaid care work”.

“The past year has been defined by communities coming together tirelessly and heroically to tackle Covid-19. We’ve gathered tonight because the road ahead is getting brighter,” Meghan said.

“But it’s going to take every one of us to find our way forward. As campaign chairs of Vax Live, my husband and I believe it’s critical that our recovery prioritises the health, safety and success of everyone – and particularly women, who have been disproportionately affected by this pandemic.”

The duchess then urged viewers to work together to help “bring vaccines to every country and continent, insist that vaccines are equitably distributed and fairly priced, and ensure that governments around the world are donating their additional vaccines to countries in need” so that we may begin to “fully rebuild”.

“Not only to restore us to where we were before, but to go further, and rapidly advance the conditions, opportunity, and mobility for women everywhere,” she added.

The necklace also paid tribute to the couple’s unborn daughter, who Meghan also referenced in her speech.

“My husband and I are thrilled to soon be welcoming a daughter,” she said, adding that it is a “feeling of joy we share with millions of other families around the world”.

According to the duchess, when she and Prince Harry think of their daughter, they think of “all the young women and girls around the globe who must be given the ability and the support to lead us forward”.

“Their future leadership depends on the decisions we make and the actions we take now to set them up, and set all of us up, for a successful, equitable, compassionate tomorrow,” she added.

Meghan also reportedly paid tribute to Prince Harry’s late mother during her appearance, with some royal fans noting on social media that the duchess appeared to be wearing Princess Diana’s Cartier watch.

The gold Cartier Tank Française watch, which the Princess of Wales frequently wore before her death in 1997, is thought to be a gift from Prince Harry to Meghan.

This is not the first time that Meghan has appeared to wear her late mother-in-law’s $23,000 watch, as she previously wore it for a series of black-and-white portraits with Prince Harry.

While the watch worn by Meghan during Vax Live appeared to be the one that previously belonged to Princess Diana, Meghan also has her own Cartier tank, which is meaningful in its own right, as she previously revealed that she purchased it with the intention of passing it on to her daughter one day.

After “splurging” on a two-tone version of the watch during her time as an actress on Suits, the now-39-year-old had added: “I had it engraved on the back, ‘To M.M. From M.M.’ and I plan to give it to my daughter one day. That’s what makes pieces special, the connection you have to them.”

The duchess completed her look with a pair of gold earrings and another Cartier piece, a yellow gold Love bracelet.