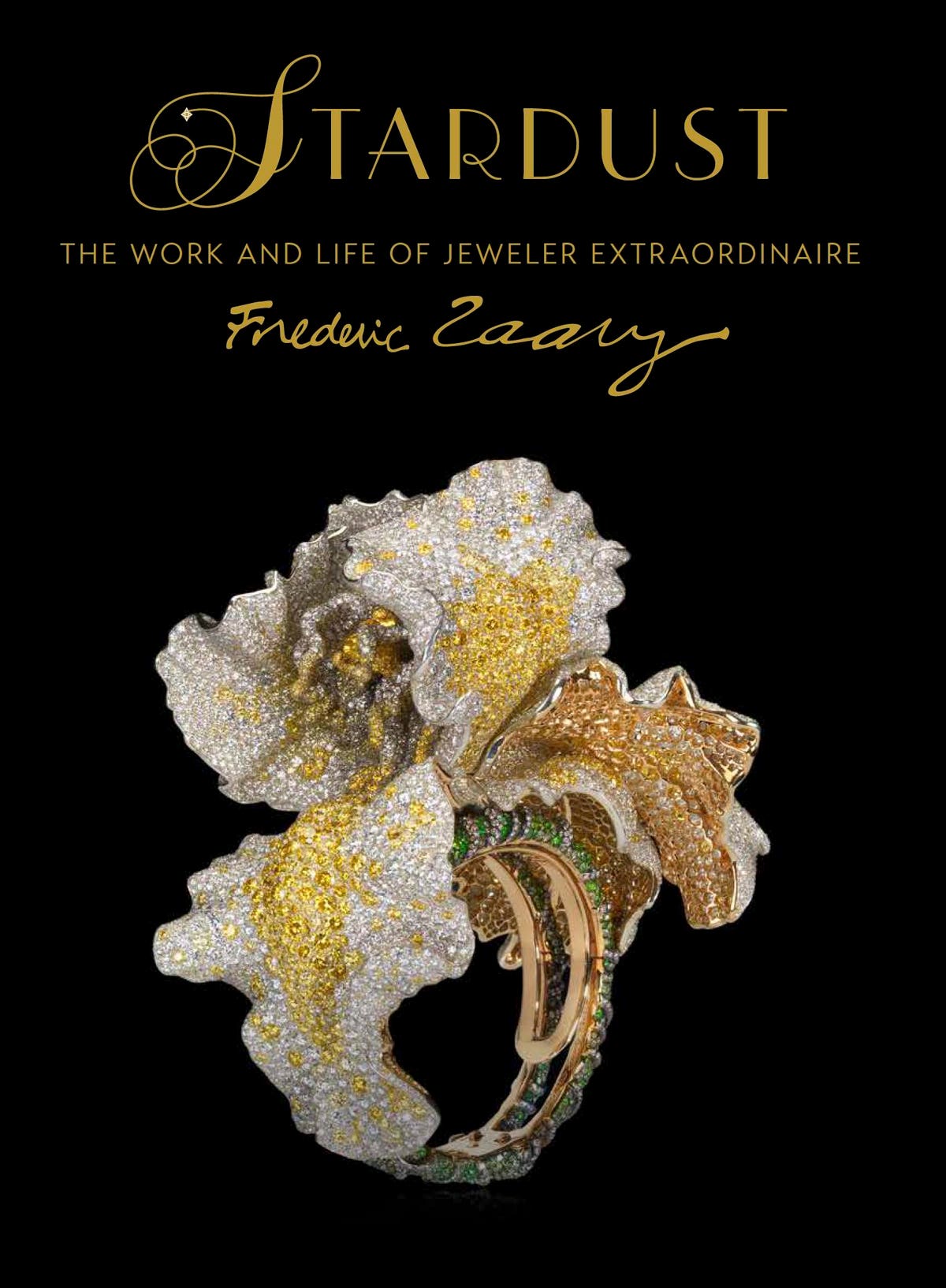 Jewelry history sparkles with true tales of gem trader-jewelers like Jean-Baptiste Tavernier, who was the gem dealer to King Louis XIV, and Jacques Cartier, whose ingenious gem hunting built his family firm into a global luxury jewelry powerhouse. While the connoisseurship, risky voyages, artistry and taste of Tavernier and Cartier are all legendary, so are those of their fellow countryman Frédéric Zaavy, who tragically died of cancer at age 46 in 2011. A Paris-based artist-jeweler renowned for painting with precious gemstones and engineering remarkable settings to hold those sparkling pieces of eternity in one-of-a-kind jewels, Zaavy is the multi-faceted subject of Stardust: The Work and Life of Jeweler Extraordinaire Frédéric Zaavy, published by the Milanese house Officina Libraria. A word about the volume’s production values:  this embodies the Platonic ideal of jewelry books. The style, substance and nature of the imagery, coupled with superbly thick paper stock and the ultra-fine resolution of each and every image, make it an outstanding book and an ideal choice for a Valentine’s Day gift. Echoing the Stardust concept, the book’s endpapers are comprised of mystically serene photographs of nighttime, moonlit skies.

Conceived, photographed and produced by eminent fine arts photographers John Bigelow Taylor and Dianne Dubler, this lavishly illustrated coffee table volume abounds with artfully lit and precisely detailed photographs of Zaavy’s high jewelry, 100 pieces of which were purchased by Fabergé for their Haute Joaillerie collection, which defined the re-launch of the heritage Russian brand in 2009. Stardust abounds with hundreds of images of Zaavy’s most outstanding jewels, such as his articulated Les Nymphéas cuff from 2005, which leads off the first section of the book, “La Maison.” Studded with thousands of white, natural vivid blue, vivid yellow, vivid violet, vivid pink and vivid black diamonds, this astonishingly fluid and dream-like bracelet blooms with alexandrite, fire opal, aquamarine, moonstone, ruby, natural padparadscha sapphires, blue pink and violet sapphires. Tsavorite and demantoid garnets round out this platinum, yellow gold and sterling marvel of design and engineering, which is an evocation of Claude Monet’s renowned “Water Lilies” murals.

The second section of “La Maison,” Les Vagabondes, highlights an array of colored gemstone rings and a bracelet from the Magnificent collection that are all psychedelic in their hypnotically vibrant intensity, clarity and design novelty. Having produced over 200 jewelry, fine art, architecture and design books, Taylor and Dubler bring a pure and penetrant vision to this project that is strong on visual storytelling. Because Taylor and Dubler also enjoyed a friendship with Zaavy, privileged portraits of the late jeweler, peeks into his Parisian atelier and interior shots of his art-filled residence in Paris’s Sixth arrondissement imbue the book with personal points of view that transcend mere documentation.

Quite fittingly, the second section of Stardust is titled, “L’Atelier,” and this graphically documents Zaavy’s renderings on his desk, his Parisian master jewelers at work at their benches and in discussion with him while he was workmaster at Fabergé. This section is cleverly edited, showing readers the passionate drive behind Zaavy’s aesthetic imagination and exacting oeuvre. Glimpses of the entrance to the building that housed Zaavy’s now legendary atelier, along with its sinuous staircases and parquet-floored halls, allow the eye to take an organic rest from all of the shimmering jewels. Other creations highlighted in “L’Atelier” include the Amazone rings, which vibrate with graphically complex encrustations of richly-hued colored gemstones in designs that variously reference Art Deco style, as well as Cubism. There is also a highly unusual and memorable tribal-like Amazone bracelet that scintillates with sculptural diamond plaques and textured gold beads. While The Ribbons jewels embody alluring, gem-encrusted ribbon-shaped jewels, they do so with an elegantly abstract flair. These jewels are counterbalanced with arresting images of Zaavy’s office, and a Parisian cityscape illuminated by a moon that glows like a big yellow cabochon sapphire in the night sky. The Legend area of Stardust drills deeper into Zaavy’s love of the natural world in all of its expressions through images of his organically inspired yet often abstract brooches, bracelets, rings and earrings. The beauty of these are emphasized by Taylor’s and Dubler’s images of gnarled trees, flowers, woodlands, and the motionless perfection of icicles frozen on a winter’s day.

The final section, “Days of Grace,” shines with images taken in Comporta, Portugal of Zaavy sharing summertime moments with friends and family during the last weeks of his life. A particularly affecting images of Zaavy on the beach captures him holding a giant crystal up to the sun and staring through it, as if to channel solar energies into the very core of his being. Without a doubt, the triumphant jewel in this section is Iris, a gold, silver and palladium-bracelet that so perfectly replicates the draping petals of a white and yellow iris that at first glance, appears to be made of fabric. Along with white, yellow and purple diamonds, this masterpiece of design and jewelry engineering also sparkles with sphene, plus demantoid and tsavorite garnets. The fact that this bracelet is relatively heavy and therefore unsuitable for daily wear makes it all the more valuable as a work of art. Zaavy’s work, and this book, remind us that fine jewelry belongs to the applied arts, because it is functional and meant to be worn every day, whereas high jewelry, or what the French call haute joaillerie, is highly refined in design and so labor-intensive and often so hard to wear that it exists in the fine art realm.

According to Katharina Flohr, who served as creative director at Fabergé and conceptualized its relaunch with Zaavy, “It is all too tragic that Frederic’s life ended so soon before he could express the full bloom of his ingenious creativity and fulfill his myriad possibilities.” Noting that this is the first interview she has granted regarding Zaavy, Flohr explained, “Much emotion is still attached to having worked with Frédéric. His personality was magnetic, he held us all spellbound with his creations.”

Fortunately for jewelry lovers present and future, Stardust provides a permanent and spellbinding photographic record of Zaavy’s many astounding jewels and his enigmatic existence. The book also includes an irresistibly colorful essay about the jeweler’s life, philosophy and legacy by the French writer Gilles Hertzog, which is printed alongside in a Chinese translation. The poignant biographical afterward is penned by Lisa Chen, Zaavy’s former business partner and the mother of one of his children. Based in Taiwan, Chen continues to produce Zaavy’s designs under his name and sells them through FREDERIC ZAAVY. (Chen’s afterward is also printed in Chinese.)

Although Zaavy may be favorably compared to Jean-Baptiste Tavernier and Cartier, Stardust makes a very strong case that this 21st century meteoric artist-jeweler sparkles within a realm of his own. As Flohr fondly recalls, “He was a magician, an explorer for gemstones, a story teller, a friend, a father, and a lover of all things extraordinary, rare and beautiful. Frédéric is embodied in all of his creations; he was the wizard and we became apprentices. He and his works were beguiling and we loved him for it.”

Regarding the book’s dreamy title, Taylor and Dubler commented that it was inspired by the book’s opening quote, which comes from the physicist Lawrence Krauss: “Every atom in your body came from a star that exploded and the atoms in your left hand probably came from a different star than your right hand. It really is the most poetic thing I know about physics… you are all stardust.”

And so, too, is everything else.