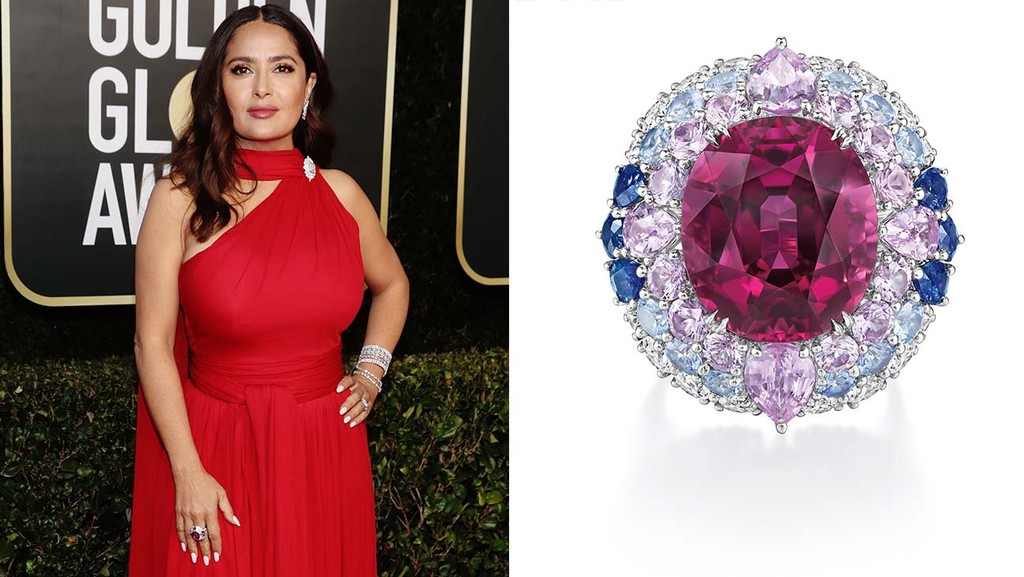 If you needed any confirmation that Hollywood is eager to embrace a post-COVID lifestyle, consider the abundance of escapist glamour that was present at Sunday night’s Golden Globe Awards. From pre-show interviews in which actresses like Carey Mulligan discussed how strange it was to be wearing high heels to the frothy tulle ballgowns worn by Rosamund Pike and Kaley Cuoco, the fantasy of high-end fashion was out in force. That idea also extends to the copious amounts of sparkle — diamonds from Harry Winston, Tiffany & Co., Cartier and others — that turned up both onstage and in virtual moments quite literally around the globe. Here’s a look at eight of the Globes’ most dazzling jewels.

The iconic actress/activist and this year’s recipient of the Cecil B. DeMille Award shopped her own closet for the white Richard Tyler tuxedo she wore onstage, accessorizing the look with a pair of shoulder-dusting Tango earrings from Pomellato La Gioia, the Italian house’s high-jewelry collection that launched in 2020. Crafted in 18-karat rose gold, the earrings were embellished with 422 brown diamonds and topped by rubellite cabochons.

The One Night in Miami best director nominee wore one of the Golden Globes’ most-discussed gowns, a custom Louis Vuitton design hand-embellished with more than 41,000 sequins and crystals. King matched that sparkle with roughly 50 carats of Forevermark white diamonds, including the house’s Long Drop Diamond earrings set in 18-karat white gold with 18.61 carats of diamonds.

The legendary jewelry house is known for elevating gemstones in the minds of global consumers, and the necklace the Wonder Woman 1984 star wore on Sunday night was no exception. Gadot’s ivory silk Givenchy haute-couture mini-dress proved to be a terrific backdrop for Tiffany & Co.’s necklace in 18-karat yellow gold that features a 48-carat bicolor zoisite, a gemstone from the tanzanite family that appears to change colors depending on the angle of view. The stone was surrounded by baguette-cut diamonds, while roughly 1,000 radiant-cut diamonds adorned the length of the necklace.

The Ozark nominee’s two-tone Prada gown with deep-V neck exuded an undeniable vintage feel, a look that was beautifully finished with statement pieces by Verdura. Garner’s jewelry included the Black & White 80th Anniversary Fulco Cuff, released in 2019 to celebrate the house’s 1939 beginnings and its founder, Fulco di Verdura. The cuff is crafted with a black briolette diamond, white diamonds, white and Tahitian cultured pearls, and black enamel on yellow gold.

The Golden Globe winner Sunday night for The United States vs. Billie Holiday channeled an undeniably Parisian moment with her ensemble, which started with an embroidered gray silk-tulle gown from Chanel’s spring/summer 2021 haute-couture collection and included details that the original Lady Day likely would have loved. The actress’s jewels were a mix of diamonds from Chanel’s fine and high-jewelry collections, including this Legende de Blé bracelet, from the house’s Les Blés de Chanel (or The Wheat of Chanel) high jewels that debuted in 2018, inspired by Coco Chanel’s love of wheat motifs in her designs, which she considered a symbol of abundance, good fortune and prosperity.

The Emily in Paris nominee attended the Golden Globes virtually, but it would be difficult to miss the Cartier cuff she paired with her one-shoulder gown by Saint Laurent. From the house’s latest high-jewelry collection, christened [Sur]Naturel for its modern approach to nature-driven themes, the cuff is a mix of coral, onyx, black lacquer and diamonds set on 18-karat rose gold.

Along with her custom strapless Alberta Ferretti gown, crafted of bronze and silver metallic disks that created a chainmail effect, Haddish chose equally graphic earrings by Messika. The Sun XL hoop earrings are part of a collaboration between jewelry designer Valerie Messika and supermodel Kate Moss and are crafted of round and baguette-cut diamonds set in 18-karat yellow gold.

Against the bold red hue of her Alexander McQueen asymmetrical gown, Hayek chose a grouping of Harry Winston white diamonds, including a brooch at her neck that was actually a secret watch from the house’s Emerald collection. But for a splash of color, Hayek also included a ring from Winston’s Candy collection, a series of one-of-a-kind cocktail rings that highlight brightly colored gemstones. This Candy ring showcases a 9.07-carat rubellite at its center, surrounded by 13.81 carats of white diamonds and blue and light pink sapphires, all set in platinum.

The Golden Globe Awards ceremony is produced by Dick Clark Productions, a division of MRC, which is a co-owner of The Hollywood Reporter through a joint venture with Penske Media titled P-MRC.