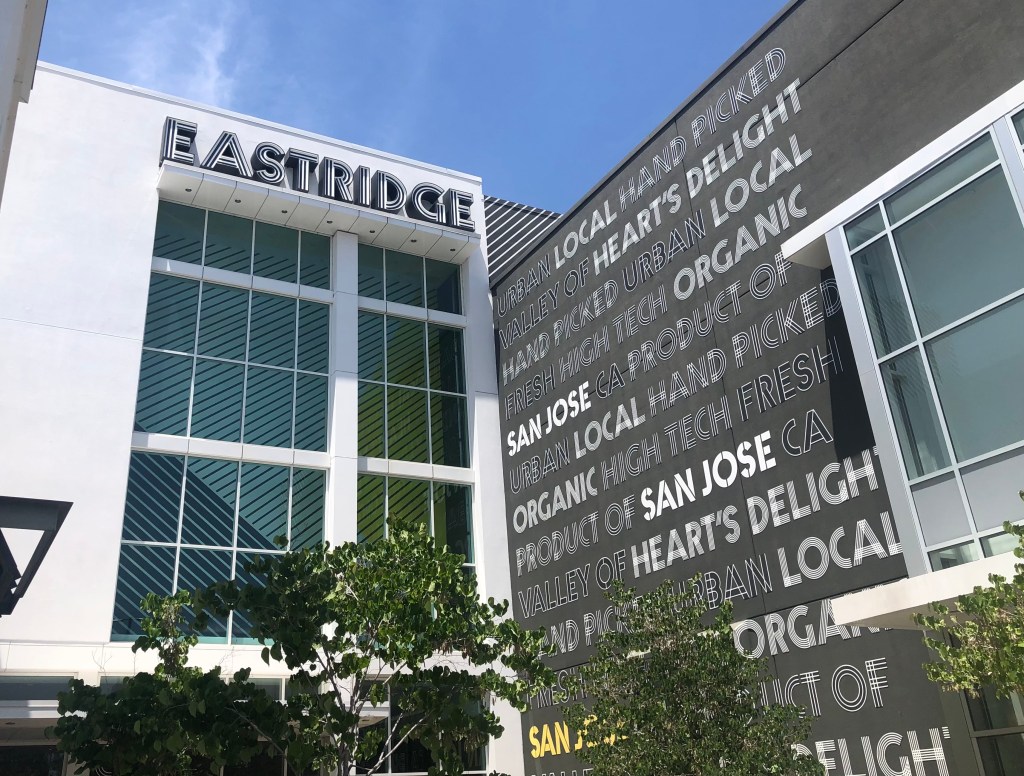 I spent some time this week at Eastridge Center, the San Jose mall that celebrated its 50th birthday on May 17. Having not been there in quite some time, I wanted to see how the shopping center stacked up to my memories. I came away pleasantly surprised by how familiar it remains.

Unlike Westfield Valley Fair and Oakridge malls in San Jose, which have been expanded and re-modeled so many times it’s hard to remember what they used to be, Eastridge is still recognizable despite its own updates. Billed as the largest indoor mall in the West when it launched in 1971, Eastridge was a big deal for residents in Evergreen and East San Jose, who no longer had to drive to Valley Fair or Westgate to shop. Remember that downtown San Jose’s retail was in full retreat by this time, and the smaller Oakridge Mall would also open that year to serve the growing population in South San Jose.

It opened with four anchor stores — Macy’s, JCPenney, Sears and Liberty House (later the Emporium) — and both JC Penney and Macy’s are still there, and the entrances to Macy’s still have big signs using the store’s then-current logo from 50 years ago.

The interior decor, of course, was pure Seventies — with reflecting pools and fountains inside the mall, which had three levels that were connected by a series of ramps that I, like all kids, loved to run on back in the day. (The three levels were reduced to two as part of a 2008 renovation.) And its centerpiece was a striking sculpture of stainless steel rods by artist Stephanie Scuris, which was donated to the city in 1983 and now stands downtown in the median on Almaden Boulevard in front of the Hotel De Anza. You can see the mall in Robert Redford’s 1972 movie, “The Candidate,” a campaign scene which retired San Jose State poli-sci professor Terry Christensen says was filmed at Eastridge before the mall officially opened.

Of course, you can expect some change in 50 years. Stores like Woolworth’s and Florsheim have been replaced by H&M and Shoe Palace. There’s now an AMC movie theater, and the eateries of the original food court — who remembers the Donut Hole? — have long been replaced by “The Eatery,” populated with more recognizable chains. The old ice skating arena — where U.S. national men’s champion Rudy Galindo got his start — is long gone, but roller skaters can take a spin at the Aloha Roller Rink, a downsized version of the now-gone birthday party favorite in South San Jose.

Eastridge Center has really leaned into its heritage in recent years, with a series of murals and other art throughout that emphasize its place in San Jose. And current ownership no doubt wanted to have a big 50th anniversary event had the COVID-19 pandemic made that impossible. Instead, it kicked off a “50 Days of Giving” campaign on Monday with a scavenger hunt for 50th anniversary logo cards good for a gift card, and it’s also asking the public to share their memories by submitting photos of Eastridge from the past 50 years. You can get all the details at eastridgecenter.com/golden-anniversary.

ART INVESTMENTS: One of the programs I’m happiest to be part of is the Leigh Weimers Emerging Artists Awards, which gives out unrestricted grants to up-and-coming artists in Santa Clara County in honor of my predecessor as the Mercury News’ columnist-about-town. Since 2013, the Rotary Club of San Jose program has given out more than $125,000 to more than two dozen artists — including musicians, painters, sculptors, dancers, actors and more. And certainly after a year of canceled shows and gigs, creative people around here could use the support more than ever.

Applications are being accepted for this year’s awards until June 30, and all the details — as well as a video of last year’s awards presentation — are available at www.weimersawards.com.

BRANCHING OUT AGAIN: There’s good news on the way for book lovers, as several branches of the San Jose Public Library will be reopening for in-person use starting May 24. Libraries throughout the city closed at the start of the pandemic in March 2020, and while you were still able to reserve books online and pick them up, it wasn’t the same experience as browsing through the titles and book covers for something that jumps out at you.

The branches that will be open next week are the Alum Rock, Alviso, Biblioteca Latinoamericana, Evergreen, Joyce Ellington, Tully and West Valley, with more on the way. They will be open from 1 to 6 p.m. Mondays through Fridays and 10 a.m. to 6 p.m. on Saturdays. You can browse and use computers for up to an hour per visit, but public seating and community rooms aren’t going to be open, and masks are still required inside. You can get more information, and watch for other opening branches at www.sjpl.org/reopening.

COMEBACK TRAIL: This time last year, email after email was about something else being postponed or canceled because of the COVID-19 pandemic. Theater shows, fundraisers and fairs all had to take a back seat to keeping people safe. In a sign of how things are improving, the opposite seems to be true these days — we’re getting flooded with good news about events coming back.

Twelve artists at the Alameda Artworks in San Jose are preparing to welcome visitors for their Spring Open Studios event on May 29-30, 11 a.m. to 5 p.m. each day at 1068 The Alameda. It’s a great look behind-the-scenes of how art — paintings, jewelry, photography and stained glass — is produced, and it’s free (unless you decide to buy something). The upcoming round of weekly art history lectures at the Triton Museum of Art in Santa Clara will be held in person starting June 3, and the San Jose Museum of Quilts and Textiles plans to reopen June 18 with three new exhibitions.

There’s finally good news for theater fans who have been streaming shows for a year: City Lights Theater Company announced its 38th season Thursday night, a slate of six shows that will be staged for audiences at its downtown San Jose theater (get the rundown and ticket info at www.cltc.org). This year’s theme? “The Road Home.” It would be nice to hit the road to see a show at someone else’s “home,” finally.