Roadwork near Exit 17 Market Basket shopping center to be delayed 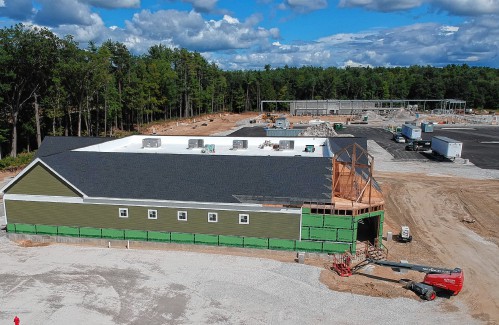 People driving past the grocery store being built near Exit 17 of I-93 won’t face road construction issues until next spring, even as work continues on the long-awaited development itself.

Earlier plans called for work to begin this fall on Route 4, King Street, where a large roundabout will be constructed to bring traffic into and out of a new shopping center on Whitney Road. But delays caused in part by the need for state permits have led to a change.

“We’re going through the permitting process with the Department of Environmental Service and Department of Transportation. It has taken a bit longer than I think we envisioned at the outset,” said Carlos Baia, Concord deputy city manager. “We’re likely going to do the Whitney Road work for the remainder of this construction season” with Route 4 work beginning next spring.

The Whitney Road work will include building a small roundabout that leads into the shopping center, called Merchants Way.

Construction began this spring on the development’s 20,000-square-foot New Hampshire Liquor and Wine outlet and 80,000-square-foot Market Basket store. The liquor store should open early next year while the grocery store is slated to open next fall, according to owners and developers Laurie and David Rauseo, doing business as Interchange Development. Four other unspecified tenants of the center are in the “design and/or permitting stages,” the developers said in a statement.

“That’s an issue for any construction project right now; everything is taking longer than anticipated. … Lead times are much more than they were in the past,” he said. “We know this is a strange time we’re living through right now, but we haven’t had to make any changes thus far with anything related to bid prices.”

The city’s road work is budgeted to cost $3.79 million. A portion of the Route 4 work will be over the border in Canterbury; Interchange Developers will pay $575,314 for that work. Changes are also being made to the I-93 southbound ramp at Exit 17, a few hundred yards east of Whiting Road.

Merchants Way is the culmination of years of debate and discussion about building a grocery store in Penacook.  An agreement with the Rauseos approved by the City Council in May indicates plans for condos, additional retail stores and an urgent care and dental office in the next phase of the project.

(David Brooks can be reached at 369-3313 or [email protected] or on Twitter @GraniteGeek.)