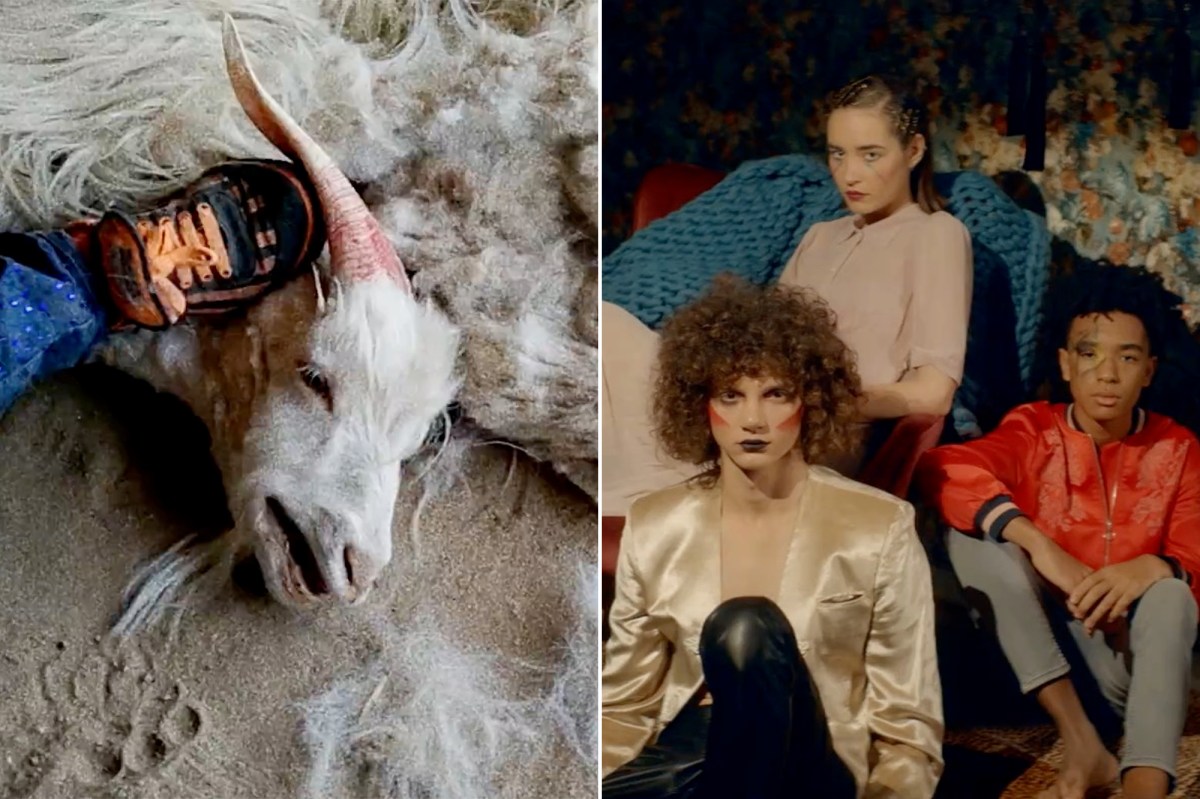 PETA — alternately acclaimed and infamous for its ongoing fight against fur — is ramping up efforts to change the entire global fashion industry.

With sweater weather in full swing, the animal rights organization’s latest PSA takes aim at the animal textile industry, which includes garments made from cashmere, leather, down and silk.

Their gruesome new video — — warning: the visuals and language are disturbing — exposes fashion factories across the world, depicting animals being abused by hard-pressed workers in the interest of supplying the demands of a lucrative industry.

PETA’s slogan, “Be a Sweater They Said,” was inspired by a 2020 viral video starring former New York City mayoral candidate Cynthia Nixon, for a project called “Be a Lady They Said.” The resulting PSA saw Nixon reciting the titular poem by Camille Rainville, about the double standards women endure concerning every aspect of their appearance and behavior.

“Watching the Cynthia Nixon video, we were struck by all the similarities that there are between the toxic masculinity of a male-dominated culture and the toxic speciesism of the fashion industry,” Ashley Byrne, a spokesperson for PETA, told The Post.

The hard-to-watch footage takes the viewer through farms and factories across the world, where animals are often hit, kicked, prodded and maimed into submission, and ultimately killed for their furs, skins and feathers.

“A sheep isn’t a sweater any more than a woman is a sex object,” said PETA senior vice president Lisa Lange, who also narrates the ad, in a separate statement. “PETA’s video challenges the old, false notion that sensitive sheep, cows and goats are ours to torment and kill at will just because they look different from us.”

The video portrays no differentiation between conventional animal products and those which are purported to be “humanely” sourced.

“The only cruelty-free products are vegan products,” according to Byrne, “because if you actually look at what goes on on these farms, it is absolutely not what people think they’re supporting.”

She pointed to outerwear brand Patagonia, which claims to be one of the most ethical retailers in the fashion industry — in part because they endeavor to monitor their vendors directly, as standard industry regulations do not take the suffering of animals into account.

Unfortunately, PETA claims they’ve done a poor job of it.

“They found a wool supplier, which they claimed [had] this rigorous criteria,” Byrne said of the brand, “and we still uncovered terrible cruelty when we investigated that farm.”

“All of this violated the standards that Patagonia said they had,” she added. (The Post has reached out to the brand for comment and will update this report if we hear back.)

PETA’s latest investigation takes aim at Urban Outfitters, Inc., whose brands include the titular UO as well as Anthropologie and Free People. Animal advocates claim the group already sells “luxurious, animal-free textiles,” particularly their woolen knitwear, and thus have no need for the animal-derived products they continue to retail.

Reps for Urban Outfitters, Inc., did not immediately respond to The Post’s request for comment.

However, footage reportedly taken by PETA’s investigators and whistleblowers at factories under the UO umbrella show goats, sheep, alpaca and other animals in a state of bloodied distress as they let out tortured cries.

In lieu of effective legislation and industry oversight, PETA puts the onus on consumers to effect change in fashion trends.

“Consumers have the choice to be cruel or to be kind every time they go shopping,” Byrne concluded. “And the best way they can have an impact is simply by refusing to buy products that are made from animals.”