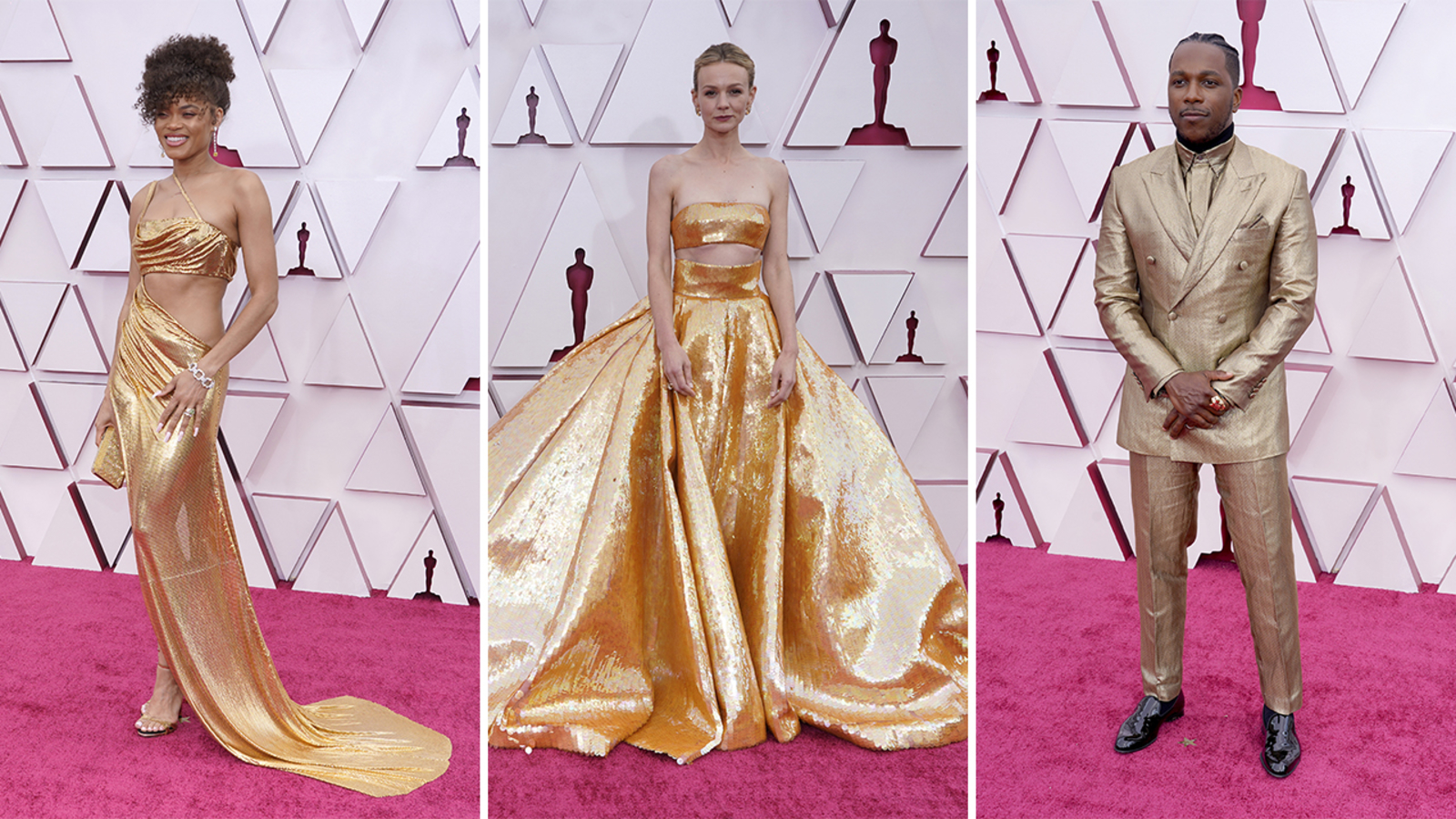 LOS ANGELES — Red carpet glam was back Sunday at the Oscars with Andra Day and Carey Mulligan shimmering in award-worthy gold and Maria Bakalova among several stars in bright white princess gowns during the pandemic era’s first big parade of fashion.

There was a strong showing of reds as well, along with belly-baring midriffs, the latter including Zendaya in standout yellow by Valentino and more than 183 carats of Bulgari diamonds from ears and neck to her fingers at the Los Angeles ceremony.

“Andra Day and Zendaya have set the tone for spring and we are showing midriff all season,” said Nandi Howard, associate fashion editor for Essence. “Both ladies arrived in beautiful gowns on the carpet with cutouts and slits that were a breath of fresh air for red-carpet attire.”

Day dressed all the way up in a sexy look cut to the thigh on one side with a cutout at the waist. It was custom Vera Wang made of actual metal, paired with a dainty pair of drop earrings tipped with yellow diamonds from Tiffany & Co. Mulligan stunned in gold Valentino couture, a midriff look with a tiny metallic top and a huge ball skirt.

With nominees scattered around the world, the red carpet was far less hectic.

“Calm. If people were here they would know how absolutely groundbreaking calm is,” said Viola Davis, dressed in a stunning white custom look with intricate cutouts in a snug bodice that fell to a princess skirt.

Bakalova, the breakout star of “Borat: Subsequent Movie Film,” also brought princess, also in white, with a bit of subdued sparkle and a plunging neckline that fell to a tulle skirt, thanks to Louis Vuitton. She snagged a pair of stunning chandelier diamond earrings for the evening.

“Regina King delivered the red carpet fantasy that award season viewers have been missing when she showed up in a sculptural, custom-made masterpiece from Louis Vuitton. While the baby blue color and the wing-like shoulders gave off an ethereal vibe, the modern neckline screamed high fashion,” said Irina Grechko, senior fashion editor for the millennial-focused lifestyle site Refinery29.com.

Riz Ahmed, Leslie Odom Jr. and Daniel Kaluuya, in a Bottega Veneta tux, were among many of the guys who went without ties. Ahmed was in Prada and Odom in Brioni.

Reese Witherspoon got the red memo, in Dior, along with Angela Bassett in a red look with statement poofy shoulders and Chopard rubies and diamonds. Bassett’s train gown was by Alberta Ferretti.

Chloe Zhao made history as the second woman and first woman of color to win best director wearing Hermes and a pair of bright white sneakers, her hair in two long braids. Her ankle-length dress was a neutral tone ruched and adorned with small beads and a latticework design.

Oscar performer H.E.R. made a red carpet appearance in cobalt blue custom Dundas. It included a hooded cape and a flared jumpsuit. Her round signature shades were by Bonnie Clyde.

Diane Warren and Odom kicked off the carpet in two trend colors: white and gold, Warren in a Valentino tuxedo white with a sequin turtleneck and Odom in a glistening gold double-breasted tux – gold shirt included.

“I’ve never been dressed by a designer before,” Warren told E!. “How cool is that?” A small Swarovski frog adorned her collar.

“I am a lucky, lucky man,” he said, while Robinson was grateful for no baby spit up.

Amanda Seyfried chose vibrant red from Armani Prive, her hair in an Old Hollywood side-swept updo. It was among a slew of classic princess cuts, hers a strapless look with a plunging neckline. Halle Berry was a loner in mauve, unfurling her light-as-air train on the carpet with her hair in a short crop.

“So tonight I am Susan your pottery teacher who has a business opportunity for you which is absolutely not a pyramid scheme,” she said.

The 9-year-old star of “Minari,” Alan Kim, vamped on the carpet in his black shorts suit with high black socks, including one with horizontal white stripes. He just had a birthday and got the bike he was hoping for. Another “Minari” star, Yuh-Jung Youn, smiled on the carpet in a Marmar Halim midnight blue brocade gown with a velvet belt, a wide diamond Chopard bracelet on her wrist.

Glenn Close, nominated for “Hillbilly Elegy,” paired a jewel-tone blue embellished caftan from Armani Prive with dark slacks and gloves. And she, like so many others on hand, was back in heels.

Other stars chose elegant black for the pandemic-era Oscars. Some were in bright oranges and pinks.

Nominee LaKeith Stanfield chose a custom black jumpsuit with a belt and wide-lapeled button-down underneath by Saint Laurent. Another statement maker among the men: Colman Domingo of “Ma Rainey’s Black Bottom” in a hot pink suit by Versace.

All told, Grechko said, Hollywood was due for the final and splashiest carpet of the Zoom-heavy, leisurewear-accented pandemic awards season.

“After a year of virtual red carpet shows, it’s clear that celebrities were ready to bring their A-game to the red carpet, with high-on-glamour looks dominating the night. From Maria Bakalova’s Grace Kelly-esque look, made with 100 meters of tulle, to Carey Mulligan’s oversized, liquid gold-like skirt train, celebrities understood the assignment and brought back fashion in a big way,” she said.

There were some big beauty moments, too.

Of Zendaya’s look, Refinery29 Beauty Director Sara Tan said: “Zendaya looked like she emerged from the pages of a magazine. It was elegant, yet effortless, a balance that Zendaya always achieves with ease. I loved that she kept her beauty look glam, but simple – waist-grazing hair, dewy skin, full brows, a simple wash of color on her lid, and a barely-there lip – so as not to compete with the collection of Bulgari jewels around her neck!”

The Associated Press contributed to this report.

Fashion designers are actually not ‘dictators of taste,’ study finds

Best High-Waist Jeans 2021 in Every Kind of Style