On Exhibit: ‘The Inspiring Women Project’ 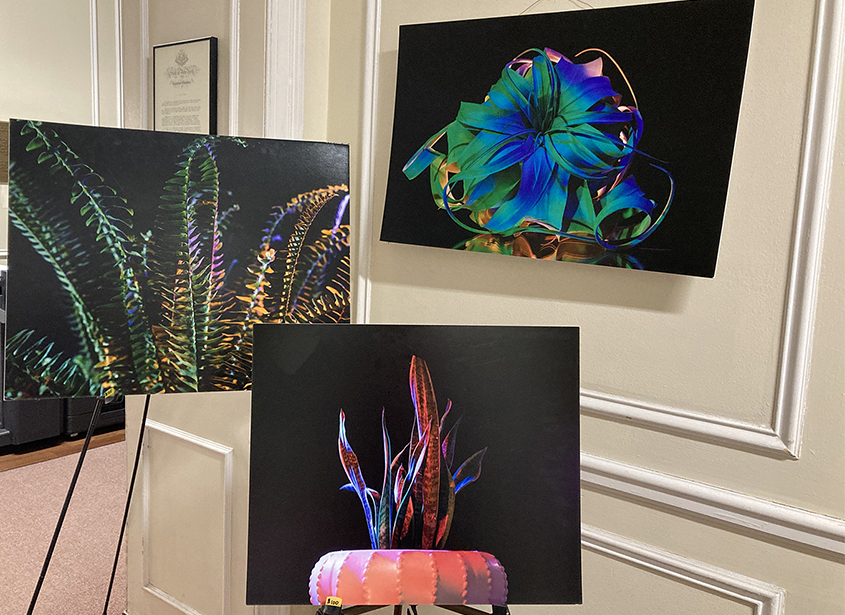 “The Inspiring Women Project,” an exhibit on view at YWCA NorthEastern NY, highlights the accomplishments of women, as well as some of the many reasons people have recently turned to making art.

Some, like Krystal Einarsson, turned to photography during the pandemic to reflect on the beauty around them. Einarsson’s striking photographs of colorfully lit house plants open the exhibit. The everyday plants are made strange, some appearing more akin to something one might find in a coral reef.

Another artist included in the exhibit turned to art after being diagnosed with Parkinson’s disease. In one work, Cathleen Bonville paints flowers in vibrant hues of purples, pinks and yellows, composing them into the shape of a dopamine molecule. The piece is a reflection of the beauty of a molecule that many take for granted, according to the artist’s statement.

In another painting from Bonville, titled “My Beautiful Brain,” a bouquet is seen sprouting from a silvery and grey brain. Bonville said that these two works, along with a third included in the show, represent “the attempt to create beauty from darkness.”

Artist Jennifer Duke Anstey, whose works span nearly one wall of the exhibit space, shines a spotlight on everyday women through a series of silver prints. Some of the portraits feature women laughing and dancing, others are more somber. Anstey includes women from a range of ages, skin tones and cultural backgrounds in the series “A Room Full of sisters.”

Not too far away is a series of paintings of powerful women in politics, including Vice President Kamala Harris, from Gayle Nelson, who was inspired by “our first woman, woman of color vice president. Smart, spunky and beautiful.”

One coruscating photo, seen across the way from the portrait of Harris, speaks to the continued fight for equality. In it, a Black woman is seen standing on top of what looks like a concrete blockade, fist raised toward the sky. There’s a police car parked on a quiet street in the periphery of the composition. The photo, taken by artist Lindsey Rae, is titled “Troy, NY BLM March 2020 — Black Women Matter.”

Further along, there are vivid paintings from Jen Dugan, including a profile of a figure with bold, rainbow-colored hair, and another of lips depicted in blues, yellows, reds and greens. Dugan was inspired by French artist Patrice Murciano and said that the paintings represent creativity, boldness and self-expression.

Many of the works in the exhibit are for sale and the funds will go toward the programs at YWCA NorthEastern NY and C.R.E.A.T.E. Community Studios. The two organizations came together to host the exhibit earlier this month as a way to shine a spotlight on local artists, as well as the contributions of women.

“As an organization dedicated to using the arts as an equalizer across cultural and economic barriers, we see this exhibit as another way to help people see differing perspectives and experiences,” said Heather Hutchison, executive director of C.R.E.A.T.E. “Art allows us to engage in dialogue that can allow greater understanding of our community.”

“The Inspiring Women Project” will be on view through March 31 and is open from 10 a.m. to 6 p.m. daily. YWCA NorthEastern NY is located at 44 Washington Ave., Schenectady. For more information visit ywca-neny.org/inspiringwomen.

More from The Daily Gazette: