Norman Landsberg, Jeweler With a Friendly Touch, Dies at 94 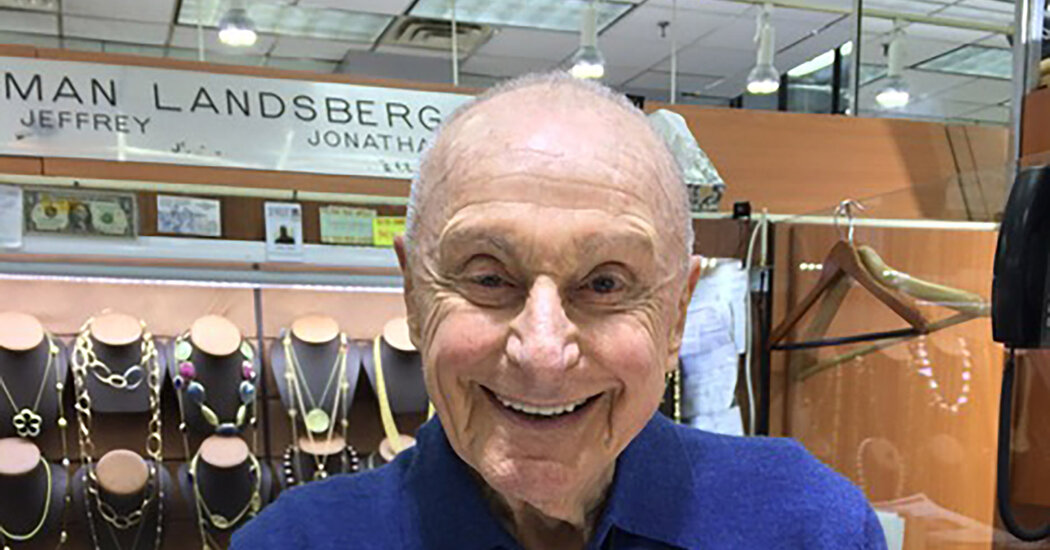 This obituary is part of a series about people who have died in the coronavirus pandemic. Read about others here.

One day in the early 1960s, the extravagant showman Liberace found his way to Norman Landsberg’s booth in Manhattan’s bustling diamond district.

Liberace wanted something opulent but wasn’t specific. Together, jeweler and pianist designed a ring — a miniature, upside-down candelabra, featuring five dangling, marquise-shaped diamonds that evoked the branched candleholder that was a fixture on Liberace’s piano.

“Liberace called my father ‘Little Boy Blue,’ maybe because he was wearing a blue sweater,” said Jeff Landsberg, a son of the jeweler. “My father was very available to strangers and would not shy from an encounter with a famous personality.”

Mr. Landsberg, who worked at the booth for 72 years, was known for his friendliness, custom designs (which he sold under the Normani line) and the spread that he laid out on Saturday mornings.

The cause was Covid 19-related pneumonia, Jeff Landsberg said.

Mr. Landsberg was born on Nov. 8, 1926, in the Bronx. His father, Jacob, had a seltzer delivery business; Norman helped, carrying heavy glass bottles up flights of tenement stairs. His mother, Molly (Kleinman) Landsberg, was a homemaker.

After serving in the Army in Germany during World War II, where he worked as a translator in German and Yiddish (which he learned at home), Norman attended New York University on the G.I. Bill. When he could not afford the $14 graduation ring, he designed and produced a cheaper replica with help from an uncle, Sam Kleinman, a jewelry polisher, and people Mr. Kleinman knew.

Mr. Landsberg made and sold about a dozen more replica rings. After enough friends asked him to repair their jewelry and create pieces, he realized that he might have a business. He opened his booth in the diamond district, on 47th Street between Fifth and Sixth Avenues, in 1948 and his sons Jeff and Jonathan eventually joined him.

His wife, Carol (Bernstein) Landsberg, was not interested in sales.

“She’d say, ‘What’s all the hand-holding and romancing about?’” Jeff Landsberg said.

In addition to Jeff, Mr. Landsberg is survived by Jonathan and another son, Barry, a lawyer; seven grandchildren; and a sister, Diane Sass. His wife died in 2015.

Until the coronavirus struck last year, Mr. Landsberg had been at his booth, selling and designing jewelry and disarming nervous customers. After a hiatus forced by the pandemic, his family reopened the business but urged him to stay home until it was safer to return.

“He called us three times a day: ‘Did you make sales? Who did you sell to? How did the store do today?’” Jeff Landsberg said. “Our daughter’s in the business. He’d call her three times day, too. He loved knowing what was going on.”