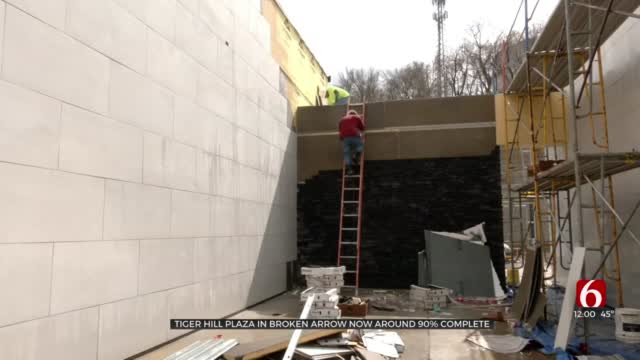 Developers said the idea for this plaza full of restaurants and shops began around five years ago when they decided they wanted to add to the continuously growing Broken Arrow community. They said they broke ground officially about a year ago and now they expect to open full swing around May or June of this year.

Developer Neil Bhow said they are more than ready to get everything open and running not only for people to enjoy, but so the tenants going in the building can start getting back to normal after taking a financial hit during the pandemic.

The owners say the pandemic and the cold weather have had an impact and put them behind a few months, but they are almost finished and will soon offer places like Keo, Society Burger, Tacos for Life, and even a chiropractor’s office along with several others.

Tiger Hill Plaza partner Steve Wallman said this location on the corner of Lynn Lane and Kenosha St. is about to be a very busy one.

“We’ve been looking at this on paper for a long time, the last ten months is actually when you see it come to fruition and you see what was a drawing on a napkin, to plans to being built, and it’s the fun part of the job,” Said Wallman.

According to Wallman, the response to the plaza was welcomed so heavily by the city that they decided to add more retail space to have more options for everyone to enjoy.