Duchess of Sussex wedding with Trevor Engelson before she met Prince Harry: see Meghan’s wedding dress and how it compares to Kate Middleton’s second gown, as well as all the details on the ceremony and why they split.


Before Prince Harry met Meghan Markle, she was married to film producer Trevor Engelson. At the time, it was questioned whether a divorcée was eligible to marry into the British royal family, but she became one of the first to do so in 2018, after the Queen granted her permission.

Now, the Duke and Duchess of Sussex are happier than ever, along with their one-year-old son Archie Harrison Mountbatten-Windsor. In case you’re intrigued, though, here’s everything you need to know about the now-Duchess of Sussex’s former husband and their wedding, including what Meghan wore.

WATCH: The most memorable moments from Meghan Markle and Prince Harry’s wedding

What did Meghan Markle wear to marry Trevor Engelson?

The now-Duchess of Sussex wore a strapless white dress with a silver jewelled belt. It was almost exactly the same as Kate Middleton’s second gown, which she wore to her wedding reception with Prince William, complete with strapless shape and belt. Of course, we can’t say whether Meghan was inspired, but it’s likely that she saw photos of Kate’s gown after the event in April 2011, and Meghan walked down the aisle just a few months later in September.

Who is Meghan Markle’s ex-husband?

Trevor Engelson is an American actor and producer. He was born in New York but is based in Los Angeles. His most renowned film credits include Remember Me, starring Robert Pattinson.

Meghan and Trevor on their wedding day

Where was Meghan Markle’s first wedding?

Meghan and Trevor Engelson married in Jamaica, with a beachfront ceremony at the luxurious Jamaica Inn resort in Ocho Rios. The event was reportedly a four-day affair, with 107 family and friends in attendance.

When was Meghan Markle’s first wedding?

When did Meghan Markle get divorced?

Meghan and Trevor Engelson’s marriage was dissolved in a no-fault divorce in 2013, after citing “irreconcilable differences”. 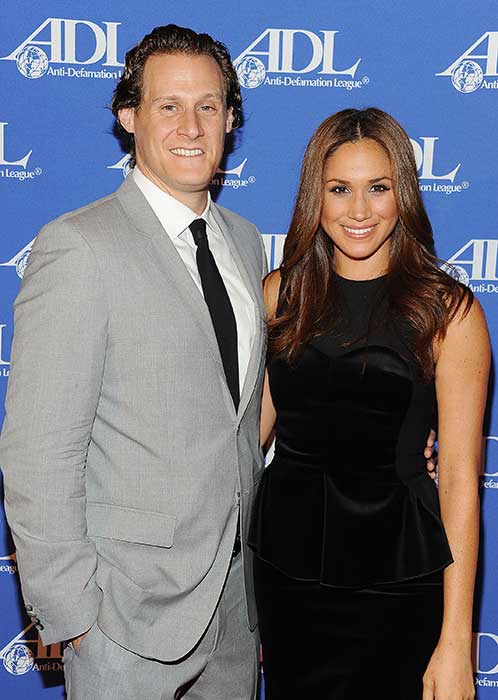 Meghan and Trevor one month after getting married

Why did Meghan Markle get divorced?

It is believed that Meghan’s role on Suits came between her and Trevor, as she was required to film in Toronto, while Trevor worked in Los Angeles. The divorce was finalised in August 2013.

According to an excerpt from Andrew Morton’s biography of Meghan, Meghan: A Hollywood Princess, “A wealthy entrepreneur friend claimed the marriage ended so abruptly that Meghan sent her wedding and engagement rings back to Trevor by registered post. Another confirmed that the decision to end the marriage was made by Meghan and that it had come ‘totally out of the blue’.”

Make sure you never miss a ROYAL story! Sign up to our newsletter to get all of our celebrity, royal and lifestyle news delivered directly to your inbox.