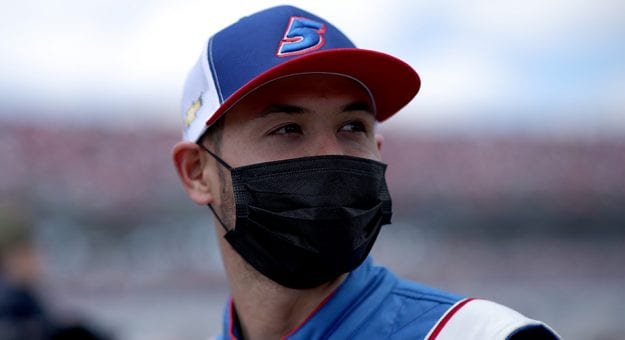 Kyle Larson sits atop the oddsboard at SuperBook USA in Las Vegas ahead of this weekend’s Buschy McBusch Race 400, as the market-making sportsbook rates the No. 5 Chevrolet a tick higher than competing betting shops around the nation.

The SuperBook, whose NASCAR numbers influence the broader betting market, prices Larson at 5/1 odds (+500, or bet $100 to win $500) to win Sunday at Kansas Speedway, making him the co-favorite with Cup Series points leader Denny Hamlin. While BetMGM also lists Hamlin as the 5/1 favorite as of Friday morning, Larson is the 6/1 co-second choice along with Martin Truex Jr. Barstool has Hamlin +550 and Larson and Truex each at +650.

For more evidence of the SuperBook’s respect for Larson this week, the Hendrick driver is priced as a solid favorite in head-to-head matchup props over a suite of NASCAR heavyweights. Larson is -130 (bet $130 to win $100) over Hamlin, -130 over both Truex and Ryan Blaney, and large -140 chalk over Brad Keselowski.

This despite Larson’s solid yet unspectacular history at Kansas and a distant starting position of 32nd on Sunday.

Larson’s 17.4 average finish over the 10 most recent races at this track ranks just 15th, but he’s finished in the top eight in four of his last six Cup events here. For much of this season, he’s been running near the front in his new Hendrick equipment, and he’s been excellent on 1.5-mile tracks in 2021, finishing fourth at Homestead, first in Las Vegas and second in Atlanta. All three of those tracks are used as comparisons to Kansas by race handicappers.

Stacking up the SuperBook’s odds against Barstool, there’s value to be found in the latter’s matchup props, where Larson is a +115 underdog vs. Hamlin (-150). Betting against Hamlin, who’s finished in the top five in eight of 10 races this season, takes some gumption, but per the SuperBook’s usually sharp numbers, +115 represents 35 cents of value, a massive edge in any bet.

More odds discrepancies between the SuperBook and other betting locales can be found within Team Penske, as the Vegas shop lists Ryan Blaney with the shortest price of the three drivers in the garage, while BetMGM and Barstool have him with the longest.

At +600 on the SuperBook’s board, Blaney sits just behind Larson and Hamlin, equal with Truex and ahead of Penske teammates Keselowski (+800) and Joey Logano (+1000). Matched in a prop against Keselowski, Blaney is a solid -125 favorite.

This pricing suggests Blaney is an enticing play at 10/1 odds to win the race in the outright market. While Blaney has the skinniest number among Penske drivers at the SuperBook, he is the longest shot of the three at Barstool, where Keselowski is +850 and Logano is +900.

Also at Barstool, the No. 12 Ford is available at +105 in a matchup against Truex, 15 cents fatter than the SuperBook, which prices the Truex vs. Blaney matchup -110 coinflip. Similar to the Larson over Hamlin angle discussed above, while a play against Truex isn’t for the faint of heart, the difference in pricing suggests value on the underdog at Barstool.

After a less-than-impressive start to the season, Blaney has been rounding into form and climbing steadily up the driver rankings. Following a disappointing 29th at Homestead, his two most recent outings on 1.5-milers resulted in a fifth in Vegas and a win in Atlanta. He sits in fifth place in the standings heading into Kansas.

Still, his visits to Victory Lane have been infrequent — he has five career wins, one in each of the last five years — and his history at Kansas has been wildly inconsistent. Blaney’s 15.0 average finish over the last 10 races at the track ranks 12th.

Hesitance to back Blaney over his Penske teammates can be forgiven, as Logano won here in October, and Keselowski boasts an average finish of 10.9 over the last 10, including a win in May 2019.

Based largely on the strength of these three drivers, in addition to Stewart-Haas’ Kevin Harvick — who hasn’t been much of a threat this season but has been outstanding at Kansas and is +900 to win Sunday — Ford is the +170 favorite at Barstool to be the winning manufacturer, with Chevrolet +175 and Toyota +180.

Marcus DiNitto is a writer and editor living in Charlotte, North Carolina. He has been covering sports for nearly two-and-a-half decades and sports betting for more than 10 years. His first NASCAR betting experience was in 1995 at North Wilkesboro Speedway, where he went 0-for-3 on his matchup picks. Read his articles and follow him on Twitter; do not bet his picks.