At Westfield Valley Fair in Santa Clara, Calif., Kitchen United has also installed a system of pickup lockers throughout the mall — the largest retail destination in Northern California — that allows the restaurants to deliver food closer to the approximately 8,500 mall workers scattered throughout the space.

Key to the implementation of the partnership is the deployment of Kitchen United’s MIX technology, which will allow customers to combine menu items from multiple restaurants into a single order. The technology has undergone considerable testing at Kitchen United’s other locations, said Atul Sood, chief business officer at Pasadena, Calif.-based Kitchen United.

The announcement parallels the recent launch of the CitizensGO mobile application from multi-concept restaurant developer C3 (Creating Culinary Communities), another growing ghost kitchen operator. That technology also collates orders for items from multiple restaurant concepts at a shared location into a single order. 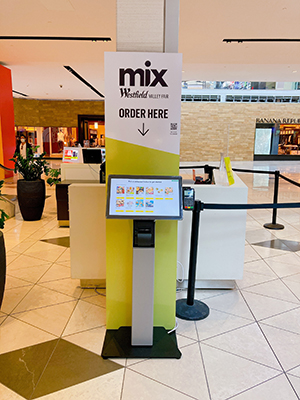 Kitchen United’s MIX ordering system, left, which consumers access via the ghost kitchen chain’s website, helps synchronize the output from each individual restaurant so that orders are completed together and hot food stays hot, cold food stays cold, the integrity of the products is maintained, Sood explained.

“It’s not easy to do,” he said. “There’s an operational focus that we need to have, and in addition, collect the food at the right time.”

Kitchen United will have its own personnel on site to help coordinate order production via close communications with the individual restaurants. The Kitchen United employees also will deliver completed orders for the mall workers to the lockers, which Sood said are also designed to maintain proper temperatures. Mall employees can order from participating restaurants through an employee app.

In addition to the MIX tech implementation, the partnership also will include a unique system of conveyor belts that will carry completed orders to a designated pick-up station, adjacent to the parking area, to serve third-party delivery drivers.

Sood said the mall is so large that drivers would likely have had to spend 20 minutes going back and forth to the restaurants in the mall to pick up orders. Instead, the conveyor system will enable drivers to pick up their orders within about three minutes of their arrival, he said.

Kitchen United and Westfield had been discussing the potential partnership since before the pandemic began last year, Sood said. He declined to discuss details of the financial relationship with the mall operator, but said that participating restaurants and Kitchen United would invest together to market the restaurants’ offerings to consumers in the area.

“For restaurants, it opens up a new incremental revenue stream and efficiencies that benefit their existing revenue channels,” he said. 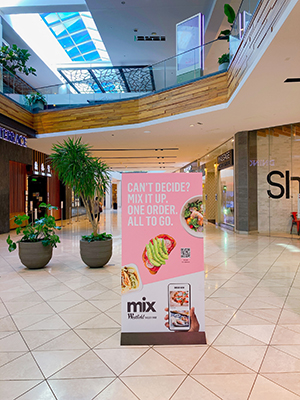 “Our partnership with Kitchen United introduces a new and convenient way for guests to experience their favorite food items on-the-go, while also driving increased revenue to our restaurant partners,” said Kate Diefenderfer, director of marketing for Westfield Valley Fair, in a statement. “With the flexibility to place one order with multiple restaurants simultaneously, regardless of location, restaurants have the ability to capitalize on the demand for food to-go, while our guests receive a customized dining experience.”

Kitchen United held a soft launch with a core group of restaurant partners in the mall, which Sood said is being expanded to include additional operators.

The implementation of MIX at Westfield Valley Fair follows the recently announced launch of the technology in the Chicago Loop neighborhood, where customers can order items from a collection of several restaurant brands in a Kitchen United location there. Other locations listed on the Kitchen United website where the MIX service is available are Pasadena; Scottsdale, Ariz.; and Austin, Texas.