Wedding bells will ring for Kip Sabian and Penelope Ford when they marry live on All Elite Wrestling’s Beach Break, a special episode of the company’s weekly series Dynamite on TNT.

The love birds first appeared together on AEW in late 2019 — they work as each other’s manager, and of course run interference during matches — and were engaged last spring. TV Insider chats with Sabian and Ford ahead of the big night about everything from a first-date Chick-fil-A meal to art imitating life.

So, how did you meet?

Penelope Ford: I was admiring him from afar.

Kip Sabian: She found me on Instagram. I’m a pretty good-looking dude.

Ford: And I got the inside scoop you were a nice guy.

Sabian: As soon as she followed me, and I saw how hot she was, I followed her back. Then we just kind of replied to some Instagram stories.

Ford: He posted a song he had written. I was like, “Give me your mixtape.” I was trying to flirt.

Sabian: We’re both kind of awkward human beings, which made it much easier.

Ford: We found out we had so much in common. We love Harry Potter. We’re just nerds.

Sabian: We like video games and Pokémon. Anything that is nerd culture we’re into. 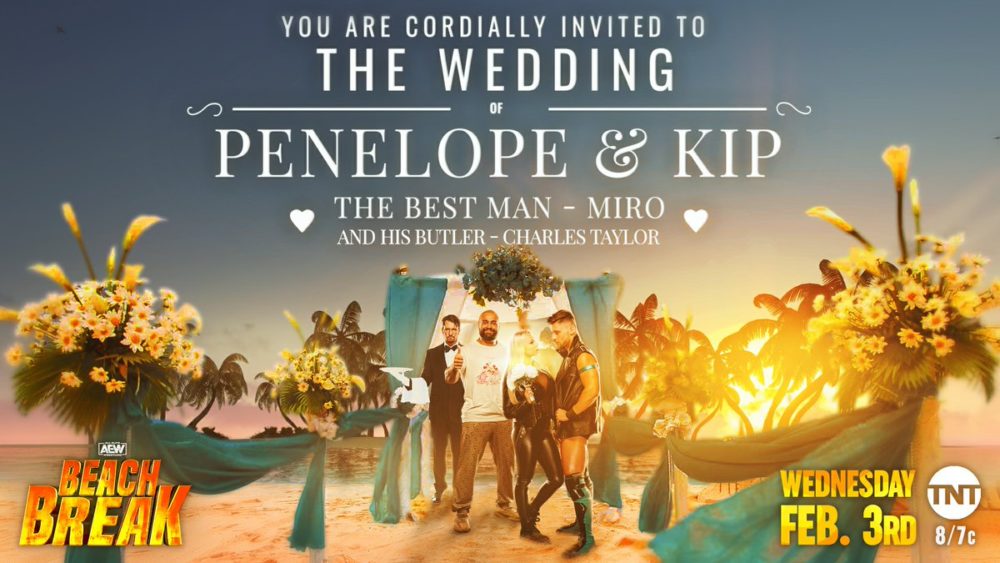 What was the first date?

Sabian: We went to Central Park in New York. I tried my first Chick-fil-A because in the U.K. we don’t have these chains. She was like, “You got to try the shakes.” Then we went up the Empire State Building.

How did you end up paired on AEW TV?

Sabian: I think it was pitched to us. Everyday life is so easy together that transferring it onscreen is second nature. And I wanted to make sure it wasn’t just Penelope who’s my manager, because she’s one of the best female wrestlers around. I wanted to make sure the job she’s doing for me as my valet or manager I’m doing for her.

Miro is going to be best man at the wedding. How has he added to your presentation?

Sabian: The character you guys see is exactly what Miro is like in real life. He is just a loving, genuine human being. He is big into video games and Twitch streaming and the gaming culture. That is a huge part of my life. We bonded straightaway. As soon as we started doing stuff together, it was so natural. You think someone who came in with name value would be a lot more selfish than Miro is. Miro is so giving and wants to make sure all of us shine. We feel the same way.

Thank you everyone for all the love and congratulations for the most amazing day of our lives. Ahh 🦋💕 #ENGAGED !!! pic.twitter.com/FRZU5cxHvp

You got engaged just when the pandemic took hold in the spring, and in a dog park. What’s the story there?

Sabian: I wanted to do it on the fourth of April, our official anniversary. And when we were living in Orlando, our favorite place was the dog park. We are huge dog parents to Oscar Albus Dumbledore. It was a nice setting.

Ford: He told me his parents wanted a photo of me, him, and Oscar to put on their mantle.

Sabian: We go to the park, and it’s closed due to COVID. I’m sweating now. We decided to hop the fence. We technically kind of broke the law. So she is there with the dog. I press record with the camera and make her think it’s a picture and drop to a knee.

Ford: I was not expecting it.

You’ve probably been asked this before, but is this a legit wedding?

Sabian: We’re getting legitimately married. I obviously wanted my parents to be there, but they understand the situation. They’ll be able to watch from home.

Ford: My parents are having a watch party with my siblings.

Sabian: We could get married in our house and be just as happy. We’re people who just want to be married. Down the line, once COVID is hopefully eradicated and things are OK, we’ll have a celebration, party, housewarming combined where all our families can be there. 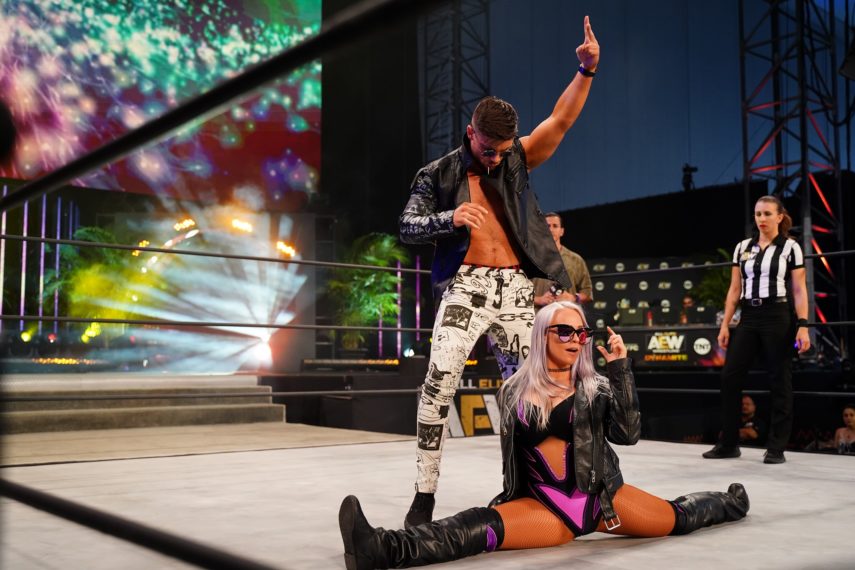 How much input did you get on how the wedding would go?

Sabian: They made it very clear they wanted to put in a lot of time, effort, and money into the presentation of the wedding. We wanted to make it a big deal, not just a story arc. We had a lot of input. At the same time it’s down to the production team, the ring crew to build the wedding set for us, which we haven’t seen yet. I’ve already messaged my closest friends in the company making sure they bring their suits. I want the people in AEW we’re closest to to be there as well. Miro has a tux ready to go. I told Sammy [Guevara] to wear a suit. If he doesn’t wear a suit, I’m going to be very upset.

Penelope, what can you tell us about the dress?

Weddings on pro wrestling shows have a history of falling apart…

Sabian: We made a point for it to actually be a wedding and not a gimmick. We want to make sure it runs as smoothly as possible, and to make sure it’s different than what you expect. Fans will expect drama, shenanigans, and exploding cakes.

Ford: This is the happiest day of our lives, and that’s what we want from it.

So, you you registered for wedding gifts on Amazon. Anything unexpected on it?

Sabian: Penelope put the list together — I’m going to be transparent about that.

Ford: There is a lot of Hello Kitty stuff on there.