An Assam resident and an IIT Guwahati alumnus’ recent visit to a beauty parlour has come as a shocker to frequent salon-goers as a simple de-tan procedure left her face burnt.

Dr Binita Nath visited a local beauty parlour in Silchar ahead of a family wedding where she got a de-tan done along with bleach. But soon after applying the cream, she felt as if someone had “poured hot oil” over her skin and she screamed with pain. A layer of her face was removed. The staff immediately put ice bags on her face but it was too late, the damage was already done.

The woman later did a Facebook live sharing her nightmarish experience.

“This is a disturbing post I know. I had come to India recently to attend sis-in-law’s marriage and hence visited a parlour. I am sharing these photos and videos just to make my friends and relatives aware about the Sarada Beauty Parlour in Silchar. They are totally unprofessional. They made me a horror movie star with zero repentance. Think twice before visiting the place. For details see the video. Feel free to share with others too. This parlour is located at the entrance to 1st link road in Silchar,” her post read. 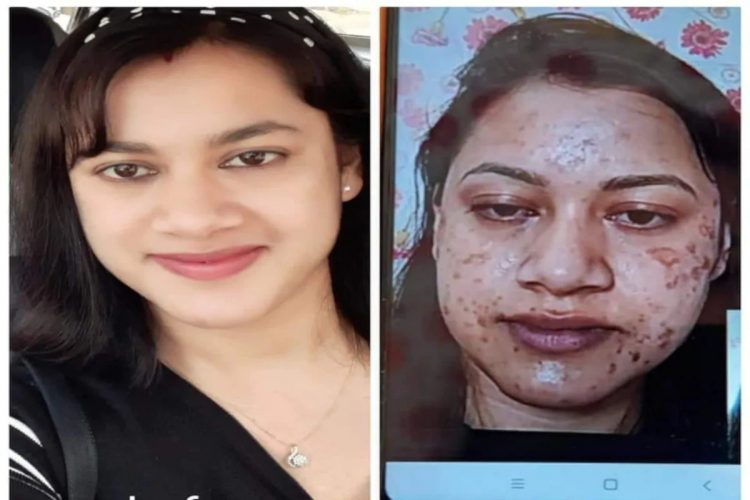 Nath, further sharing her horrendous experience with media, said, “I don’t go to the parlours normally. I don’t do threading even. When I went there, the staff suggested I had some facial hair and so if I don’t wish to do threading or waxing, I can go for bleach. They also recommended de-tan facial for my skin. I agreed.”

While her FB live went viral, the owner of accused Sarda parlour, Deep Deb Roy, came out with an explanation. He said he is sorry for her but that day both he and his wife were not present in parlour as his father was unwell and bedridden. Owner claimed their staff asked Nath not to do bleach after a de-tan facial but she insisted, which led to the unfortunate incident.

“The staff at the parlour told her that bleach might not go well after a de-tan facial, but the client insisted and staff had to follow her,” Deep Deb Roy said.

However, Nath has rejected the claim and said she was “not a fool to destroy her own skin”. She claimed owners were total irresponsible, insensitive when she put her issue on WhatsApp with images. She said they didn’t even answer her calls and never cared to apologize so she had to put out everything openly on social media.

The woman currently resides in Italy as she got an offer from University of Rome (also known as Sapienza University) for post-doctoral studies. She was in her hometown Silchar when she visited the parlour.