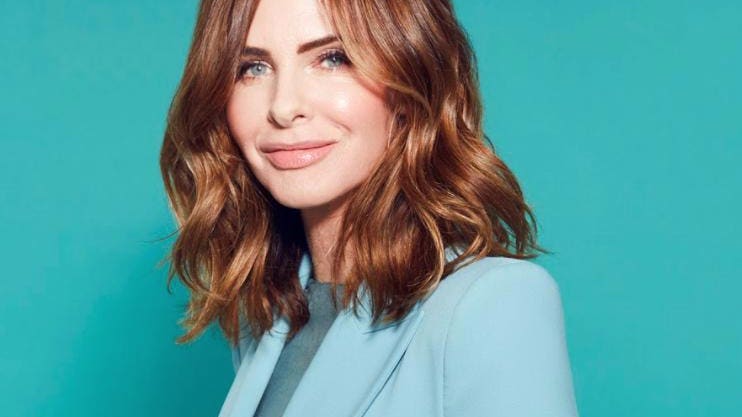 After an hour or so chatting with Trinny Woodall (virtually, of course), I’m amazed she didn’t start a beauty business earlier.

Not only because her brand, Trinny London, is one of Europe’s fastest-growing direct-to-consumer startups, with a £180 million [$250 million] valuation, but that she talks about the industry with more passion than anyone I’ve ever interviewed.

Best known as the taller half of international style duo Trinny and Susannah, Woodall spent much of her 30s jet-setting, introducing ‘super slimming’ style makeovers to Oprah’s viewers, and co-hosting TV shows that taught women how to dress. The most iconic of which being What Not To Wear, which celebrates its 20th anniversary this year.

The breakout BBC show, which spawned from their newspaper column of the same name, took ‘fashion-challenged individuals’, secretly nominated by friends and family, through a gruelling makeover process led by Trinny and Susannah’s teetering-on-offensive style critiques—and the world couldn’t get enough.

Tag line: we’ll tell you what your best friend won’t.

“It was very rule-driven, and I’ve always found rules helpful in my life, but the language—of how I talk to women—has changed so much,” she tells me from her walk-in wardrobe over Zoom.

“The language I use now is much closer to my heart, not ‘you can’t wear a polo neck if you have big tits!’, you know?” she brushes a few tong-ed curls back as she rolls her eyes. “I made over many women in What Not To Wear—and then in consequential shows that I did across Europe, when we were no longer flavour of the month in the UK.

“I did three years of going to about 16 countries and it really cemented, for me, the sense that it doesn’t matter your religion, the color of your skin, where you live—the emotive feelings that people have are the same.”

She began thinking through the concepts for Trinny London years before its 2017 launch (“always that thing of an entrepreneur—when do you get it out of your head and onto the kitchen table!”), knowing her own relationship with the beauty industry presented problems that women needed answers to.

“Whenever I’ve made over a woman, or she’s been on one of our shows, the first thing she notices is her makeup,” she says. “A makeover for a woman is not the clothing. It’s everything together. It’s her hair, her makeup, her new skincare routine, sometimes her clothing—how she perceives herself as a result of all those things coming together.

“Depending on how a woman feels about her body, she might notice hair and makeup more. It’s the most transformative thing. I had many, many years of acne so I was always obsessed with makeup—I wore way too much, too orange, horrible pink lips, every single mistake in the book. I was quite obsessed with the women who weren’t hiding themselves behind it.”

Woodall started taking cocaine as a teenager, hoping it would give her the confidence her battle with chronic acne had stolen. It took her more than a decade, and many trips to rehab, to recover from addiction.

“The biggest change for me when I reached 50 was, in the politest way possible, that I didn’t really care what people thought any more. That allows you to be true to yourself, your ideals, and what you want to do.”

Which, serendipitously, marked the birth of Trinny London.

After months of work on the brand’s initial 50 SKUs at her kitchen table, Woodall invited 200 women for full Trinny London makeovers in her bathroom.

“It was a very manual way of getting to the algorithm we now have,” she says, explaining that the brand was always intended to be digital-first, and reliant on advanced algorithms. “It needed to sit, not with a room of techies thinking of a clever play, but with emotion. Then translated by the room of techies with a clever play.”

The women who would eventually be attracted by said algorithms, and hopefully buying her products, were at the heart of every idea Woodall had.

“When I first went to Unilever, pitching for funding, I remember Olivier [Garel], who is the lead of Unilever Ventures, saying ‘Who’s your target market?’ and I said, ‘it’s more an attitude than an age thing’. I don’t feel like people should be compartmentalised by age, because when I see a brand is selling menopausal creams—as a menopausal woman—it’s last thing I want to buy.

“There’s a lot of women, 50 to 60, who grew up in an age of beauty where everything was so retouched and the words used were ‘anti-ageing’, ‘youth-making’, you know? I want to—” she mock vomits “—over these words. They’re so patronising.

“I don’t feel we should all go down the path of life in the same way, because I’ve done Botox since I was 35. Everyone should be able to choose the way they go down it, with the tools they want.”

As such, Woodall wanted Trinny London’s website to be as inclusive as possible, giving every customer the chance to see someone they looked like wearing a product they’re interested in. Today, the lookbook features 120 non-professional models.

“You know, purchasing is about trust,” she says. “And building that trust is something I probably learned to do in the 2000s, because whenever you’re filming you have to get to know somebody—to create that intimacy, to see what really makes them tick—very quickly. And you might have met them two minutes before.”

Woodall credits the success of Trinny London to the many lessons learned throughout the ‘90s and early ‘00s, including the devastating failure of her first business venture.

“I did start my career trading commodities,” she notes. “I thought I should be that person—youngest of six kids, my dad was a banker—and I realized I absolutely hated it.”

Looking for something new, she felt the very beginning of the dot-com boom offered opportunities unlike anything else. “In ’99, I did a raise for an online business and we raised £7 million [$9.6 million] in three months. To do a pitch to closure in that time is unheard of now.

“I had that first taste, then the dot-com bubble burst, and we couldn’t really show how we were going to be profitable. I learned a lot from that.”

When the time came to raise for Trinny London, Woodall was resolute to raise no more than the business genuinely required to launch, and committed to building her teams as slowly as possible.

“I had a COO from a bank, because I wasn’t sure if I understood how to run a business. By the time I got to this ripe age, starting this business, I think I’d learned enough in different sectors. I ran the financial side of Susannah and I’s business. Our negotiations and contracts. So I’m very comfortable with that.

“You bring everything you know when you start, then look for the smartest people you can hire—at the right time—to help you grow to the next stage.”

For the first year and a half, Trinny London was only staffed by Woodall, COO Mark McGuinness-Smith, and a handful of interns. Today, there are over 120 employees.

“I’ve had the most aggressive growth plan, compared to my COO and CMO, and we’ve still outperformed all of our projections every year since we launched,” she says.

“I’ve never been interested in that really high churn for high growth, but that was difficult when we then did our second raise, because some companies wanted to see that Glossier trajectory, and they didn’t mind the high churn. But we said no. We want that lifetime value customer; she’s a huge chatter, she talks to other women, she’s talking now to the mainstream woman, and she was the early adopter. And that really grows the business.

Against all odds, the company has not only survived—but thrived—throughout the coronavirus pandemic, too.

“That first week in March we were thinking ‘it’s so inappropriate to be advertising’, so we cut all advertisement. We were feeling that shock and paralysis that was everywhere,” Woodall admits. “Then we noticed that, organically, we were super high in our sales a week later.”

On a whim, they turned all Facebook ads back on, unchanged, and spent the next month setting up technology that would enable them to host virtual appointments with potential customers.

“We were of the first ones to do it, and 3000 went in a day,” she says. “We realized that this collection of women, who may have been a follower but not a customer, were sitting at home wanting to try something new. And because we’re not heavy, heavy makeup, it’s about education, and buying something that makes you feel good.”

Full, camera-ready smile on, Woodall notices I have a wall of Post-Its behind me. She walks her laptop over to a Post-It her own. Perfectly color-coordinated (natch), each marks a significant moment in the business’ growth, as well as upcoming releases.

“It’s immediate. I can see, this January, we’ve done 4.7, so I look at that, I see the growth, then it’s easy to see what things take us to the next stage; a change in tech, an A star launch. I look at August and know it might be a hundred-grand spike.”

Previous ‘A star launches’, like tinted serum-skincare hybrid BFF DeStress, have not only pushed the business’ base line up by £50k ($69k) in a day, but resulted in long-term boosts. Trinny London now sells one BFF product every 70 seconds.

“There isn’t actually anything on the market that compares to it,” she says. “I want De-Stress to have the share of the market that DoubleWear has. That’s how big I think it can be.”

“In the long-term, I’d like to see Trinny London as the type of place you’d go for everything inside your bedroom or bathroom,” and with that glint in her eye, I think she just might.