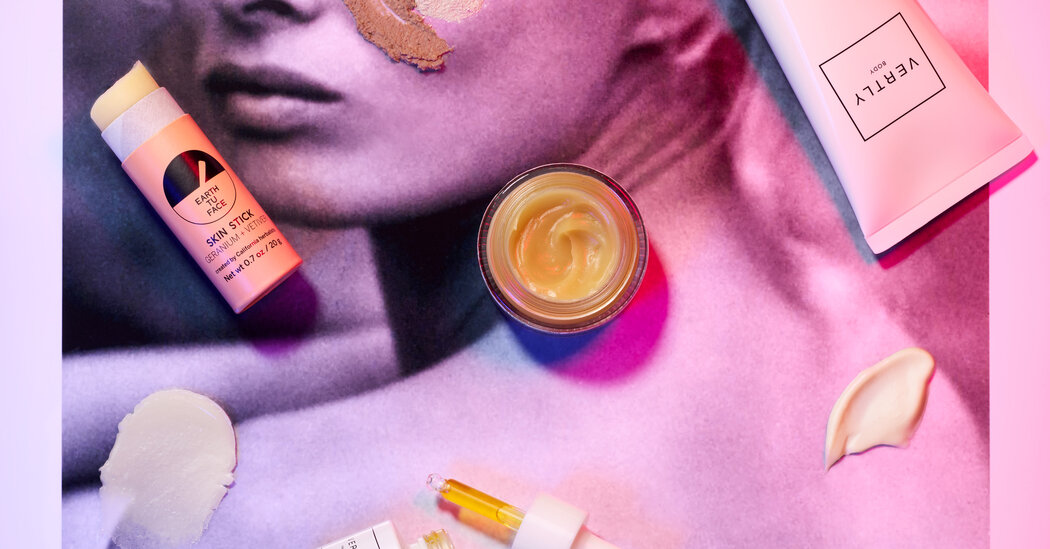 In certain parts of Northern California, cultivating edible plants — beets, rosemary, kale, lavender — is so central to the lifestyle that, as the Marin County resident Claudia Mata puts it, “It’s a rarity to find someone who isn’t growing their own food or herbs in their backyard.” With its moderate oceanic climate, nutrient-rich soil and free-spirited hippie vibes, the area — which extends roughly from Monterey to Siskiyou County — has long been fertile ground for landmark food and agricultural movements: organic farming in the 1940s, winemaking in the 1960s, farm-to-table cooking in the 1970s. More recently, it has also fostered an influential community of beauty entrepreneurs. Since at least the early aughts, plant-based brands have thrived in the region, offering potent formulas derived from homegrown ingredients and produced in small batches with minimal preservatives. Such principles, coupled with increasing and widespread interest in the kind of holistic living that many Northern Californians have been practicing for decades, have paved the way for today’s larger clean-beauty boom.

“When we started out, the organic food movement was well established in the Bay Area, but it hadn’t really caught on in the skin-care industry yet,” says Veronique Nadeau, who founded her nontoxic brand, Marie Veronique, in Berkeley in 2002. She cites the Berkeley-based chef Alice Waters’s influential Chez Panisse restaurant, which has made eating locally grown produce deliciously appealing since its opening in 1971, as one of her inspirations. “I wanted to be the Waters of skin care — the idea has always been to make our products in small batches and to source locally,” Nadeau says. Soon after her line launched, others followed, including the San Rafael-based Juice Beauty in 2005 and, later, in 2014, the San Francisco brand True Botanicals and Napa Valley-based Vintner’s Daughter. “It’s amazing how much of the organic skin-care movement was spearheaded by little companies that sprang up all over Northern California,” says Nadeau.

Now well known, these brands aren’t so little anymore. But others are carrying on the region’s grass-roots tradition. Mata founded Vertly, her CBD-infused-skin-care range, in 2017. The herbal-extract-centered line may be sold at Nordstrom and Bloomingdale’s but it remains dedicated to the ingredients and culture of Novato, a laid-back, rustic town nestled among rolling hills and wineries about 25 miles outside of San Francisco, where she creates her healing serums, mists and bath salts using crops from nearby farms. “I’m very hands-on, always touching my plants and inspecting them,” she says of her process. “This attention to detail is what we are most proud of.” And there are others like her, dedicated to honoring the region’s farming legacy while also using modern innovations in sustainability and green chemistry — measures that feel especially important in light of the recent wildfires — to produce powerful, highly effective formulas. Here, five small-batch brands that capture the essence of this wild, bountiful part of California.

Justine Kahn grew up in Woodstock, Vermont, with parents who believed that eating fresh, organic produce was essential to a healthy body. After becoming an aesthetician, she realized the same theory can be applied to what we put on our skin. Kahn launched Botnia, her nature-focused, science-backed brand, in 2016 while studying herbalism and biodynamic farming in California. Many of her ingredients, including roses, comfrey, chamomile, calendula and yarrow, are cultivated on her quarter-acre microfarm in Sausalito (the rest come from local growers), and she collaborates with a chemist to develop and test the range. Her Hydrating Serum ($49), a rich but nongreasy elixir made from rose geranium and soy-based hyaluronic acid, is the brand’s most beloved product, and its sea buckthorn-infused Wisdom Oil ($72), which protects against environmental aggressors such as pollution and sun exposure, isn’t far behind. While Botnia is expanding — it’s currently sold by 15 retailers and 130 spas in the U.S. — Kahn is committed to keeping her production process simple and manageable. Case in point: When she needs more jojoba oil, one of the farmers she partners with simply “goes into the field, picks the fruit, presses it and sends us a fresh batch.”

The Paris-born Alice Duvernell spent the early part of her career in ethnobotany, the study of a region’s plants and their practical uses, at a nature preserve in northeastern Brazil. After a bad bout of acne, she sought out a local plant master, who taught her about topical skin-care solutions — and so began her mission to harness the healing power of botanical ingredients. In 2014, she moved to Marin County and put her decades-long studies to use with Biophilia, a beauty line that encompasses skin care, perfumes, healing salts and honey. Duvernell grows roughly 80 percent of her ingredients on her one-and-a-half-acre farm in Sonoma, where she also leads workshops on such topics as essential-oil distillation and biodynamic plant medicine. Her vitamin C-rich Rose Hydrosol ($25), which is made from Rosa Damascena flowers that only bloom four weeks of the year, is particularly hydrating, while the line’s Monk’s Balm ($25) is a medicinal salve of comfrey and propolis inspired by an ancient recipe. Up next is a holistic acne line that features locally grown antibacterial olive leaf and anti-inflammatory yarrow, and has been 20 years in the making.

In 2016, cannabidiol — or CBD, an active ingredient derived from cannabis — was hardly a common element in beauty products. But that was the year Claudia Mata, a former magazine editor, saw the potential in combining the plant’s anti-inflammatory properties with skin-revitalizing herbs such as marjoram, calendula and dandelion — an idea that, a year later, formed the basis for Vertly. Mata sources her full-spectrum, rigorously tested CBD from Colorado and extracts the rest of her ingredients, a process that can take up to four weeks, from plants grown near her Marin County laboratory. Mata, who was born in El Salvador and raised on holistic remedies, spends even longer tinkering with the her formulas: The hydrating Glowing Face Serum (from $55), packed with 24 botanical extractions (including rose hip and nettles), went through more than 350 iterations before Mata was satisfied with the results. “Each batch should almost have a vintage, like wine, because of the variance of the plants,” she says. Another standout is the Relief Lotion ($48), infused with arnica to soothe muscles (it’s great post-workout, as her husband, a trained yogi, can attest). Mata also plans to release a line of one-off items produced in small, limited batches from seasonal crops beginning this winter. Much like an offering of fresh produce at the farmers’ market, once an item sells out, she says, “it’s gone.”

The Bay Area herbalist Sarah Buscho had an auspicious start to creating Earth Tu Face, her skin-care line that employs California-grown food-grade ingredients. In 2008, she took over one-third-acre garden plot in San Rafael — to cultivate flowers and herbs for beauty products — that had once supplied the lettuce and fava beans for Waters’s Chez Panisse. (The soil, says Buscho, has good karma.) She now grows calendula, lavender and heritage roses there for her pore-refining Exfoliant Powder Mask ($72) and purifying Honey Mask ($52) and all her offerings are developed with sustainability in mind. Her healing Skin Stick ($34) is known for its stylish-yet-compostable tube, and her Passion Fruit and Yuzu Lip Balm ($25) comes in a zero-waste compact crafted from a seashell. Everything is free of harsh preservatives, and many formulas, including that of the immortelle-based Face Balm ($68), are free of water, meaning they’re “super concentrated with botanical benefits,” says Buscho, who also adjusts the brand’s offerings periodically according to plant populations. (A vanilla and peppermint lip balm is currently being phased out because “the vanilla industry is experiencing a reduction in yields due to climate change.”) This winter, she will introduce a new collection of botanical home and body mists — a first for the brand — that she hopes will help everyone “breathe a little easier.”

Fat and the Moon, Grass Valley

Born in Milwaukee and raised by Slovenian parents, Rachel Budde grew up around folk medicine. Her family had a cabinet full of fresh and dried plants for creating home remedies, such as tart cherry schnapps, which is prized for its immune-boosting benefits. In 2011, Budde began studying permaculture, and later herbalism, before moving to Grass Valley — an area in the Sierra Nevada foothills about three hours northeast of San Francisco. There, Fat and the Moon, a skin- and body-care line informed by both traditional Slovenian recipes and Budde’s background in botany, was born. The brand’s popular Deodorant Cream (from $12) blends odor-absorbing arrowroot with clary sage and tea tree essential oils; the skin-illuminating Highlighters ($18) come in three sunflower-oil-based shades (the pearlescent Beam variety is imbued with extracts from the leaves and branches of the Madrone tree, a species that is considered by many communities in the Pacific Northwest to be spiritually sacred). Budde will soon launch Kosmos Spa(ce), a wellness center in nearby Nevada City that will offer facials, body treatments and freshly made herbal goods, some of which will be inspired by ancient Slovenian preparations, even if the ingredients are distinctly Californian.