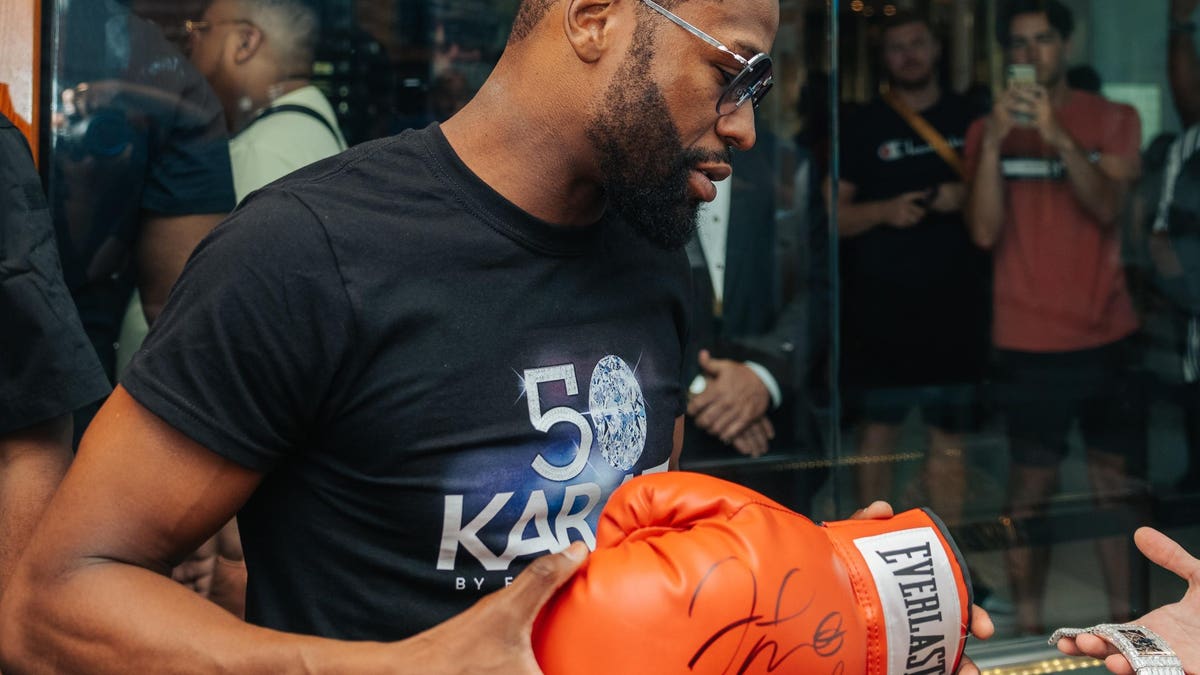 Undefeated five-division boxing champion Floyd Mayweather is kicking off fight weekend with a bang – or should we say “bling”? The International Boxing Hall of Fame inductee is launching into a new entrepreneurial lane with “50 Karats by Floyd Mayweather.”

According to National Jeweler and Jewelers of America’s “Diversity in the Fine Jewelry Industry” 2020 survey, which was conducted in an effort to “better understand the experiences of people of color,” around 66 percent of survey participants were white. Moreover, “nearly 60 percent of survey-takers, regardless of race, agree—the jewelry industry does not do enough to make Black employees feel accepted,” and 77 percent added that “the jewelry industry is no better (43 percent), worse (24 percent) or much worse (10 percent) than other industries at supporting Black employees.”

Now as a Black man, iconic professional athlete, and entrepreneur, Mayweather is creating a space of luxury owned by the very demographic that the fine jewelry industry was demonstrating to not cater to. When asked by For(bes) The Culture about the inspiration behind “50 Karats,” Mayweather humbly admitted that it wasn’t his idea. In fact, friends of his proposed the idea to him and he believed in it, thus the conception of the jewelry business. “Nothing is easy,” he told For(bes) The Culture about the most difficult parts of exploring this new avenue of business. “When you have a great product, it sells itself – just like me.”

He continued to explain how entrepreneurship has played an integral part in his brand as Floyd Mayweather. From the Mayweather Boxing Club to his various real estate investments and The Money Team, Mayweather has continued to flex his business-minded muscle in more than one area. At the beginning of his career, he said, he had a promoter, though he believed he wasn’t being promoted in the right way. Eventually, he parted ways with his promoter after ten years – between 1996 and 2006 – of his 25-year boxing career and began to see a significant shift in his earnings once he took ownership of his own marketing.

“I was making different amounts of money but I never made eight figures until I left and became my own boss,” he revealed to For(bes) The Culture. After buying himself out of his contract for $750,000, he made eight figures after his first fight thereafter. “From there, everything went up because I was my own boss and I rolled the dice to become a living legend and an icon but nothing happened overnight. I took my time, rolled the dice, and here we are today.”

This exclusive release and shopping experience is managed and operated by Eric The Jeweler, and took place exclusively at the Fontainebleau during the historic #MayweatherPaul Fight Weekend between Floyd Mayweather and Logan Paul. The launch is taking place from Friday, June 4th to Monday, June 7th inside Miami Beach’s Fontainebleau Hotel.

Featured next to some of the finest jewelry pieces in Miami, Mayweather’s $18 million watch from his private collection and is also available for sale. Furthermore, Mayweather’s championship belt is being showcased alongside the largest privately owned Richard Mille watch collection in North America by Limitless’ Jas Mathur.

“Early on in my career, I made the short-term sacrifices for the long-term rewards,” Mayweather said. “A lot of times, people see me now at an older age, fighting YouTubers and MMA guys and wondering why I make 300 and 400 million. I made the sacrifices early when I was making $100,000; $25,000; or $8,000. Nobody talks about that,” Now that he’s older and wiser, Mayweather acknowledges the foundation that he created for himself during the early stages of his career, which allows him to reap the benefits of his success today.

“I know during COVID, we couldn’t really gather in large groups and that has affected a lot of people and since this boxing exhibition is unconventional; I wanted to do something different to engage my fans and give them a unique experience,” read Mayweather’s press release statement sent exclusively to For(bes) The Culture.

NBA rookie and first-round 2020 draft pick Anthony Edwards was in attendance at the exclusive VIP launch and expressed his admiration for Mayweather’s entrepreneurial journey. “I’m a big fan,” he told For(bes) The Culture. Edwards, who is currently the Minnesota Timberwolves shooting guard and small forward, continued to express how Mayweather’s ventures inspire him as a young, Black professional athlete.

“He does a great job continuing to bring money in. Getting to know him and us building a relationship ain’t going to do nothing but help me in the long run,” Edwards said. “I just got in the NBA [for] my first year, and I don’t really know that much about money, so it’s going to help me for sure.”

Additionally, Mayweather launched “TMT Ring Girls,” which is a campaign that gives one woman a once-in-a-lifetime opportunity and all-expense paid trip to be a ring girl during the 8-round exhibition during this weekend’s fight. With this being the first time that the professional boxer has held a fight on a Sunday, just as other major sporting events, this is also Mayweather’s first time being able to pick ring models of diverse backgrounds to partake in the exhibition match.

“We are excited to launch ‘TMT Ring Girls’,” read a statement by James McNair, President of The Money Team, a lifestyle brand inspired by Mayweather himself. “Being able to give this opportunity to a fan on such a big stage with the world watching is huge. It’s important to The Money Team that we engage with and give opportunities to our fans and supporters.” London Borom was announced as the winner on Mayweather’s Instagram by McNair and Mayweather’s eldest son Koran Mayweather.

In the midst of preparing for his fight tonight against YouTube personality Logan Paul, Mayweather shared how he keeps his mental health in check while going through with the “50 Karats by Floyd Mayweather” launch. His secret – boxing.

“Boxing is a lot of wear and tear on the body. We always believed in defense-first – the less you get hit, the longer you last. That’s in anything, in any business,” he shared about his mental tactics. He acknowledged that the smarter he was inside the ring, the smarter he could be with his investments outside of the ring. He described his New York state real estate investment portfolio as “crazy,” as he just contributed to the construction of One Vanderbilt, the largest skyscraper in the city.

Between his cryptocurrency ventures and owning worldwide properties, Mayweather is confident in his entrepreneurial journey in addition to the results of tonight’s fight. His final words before the conclusion of the interview – “I’m making a lot of power moves.”