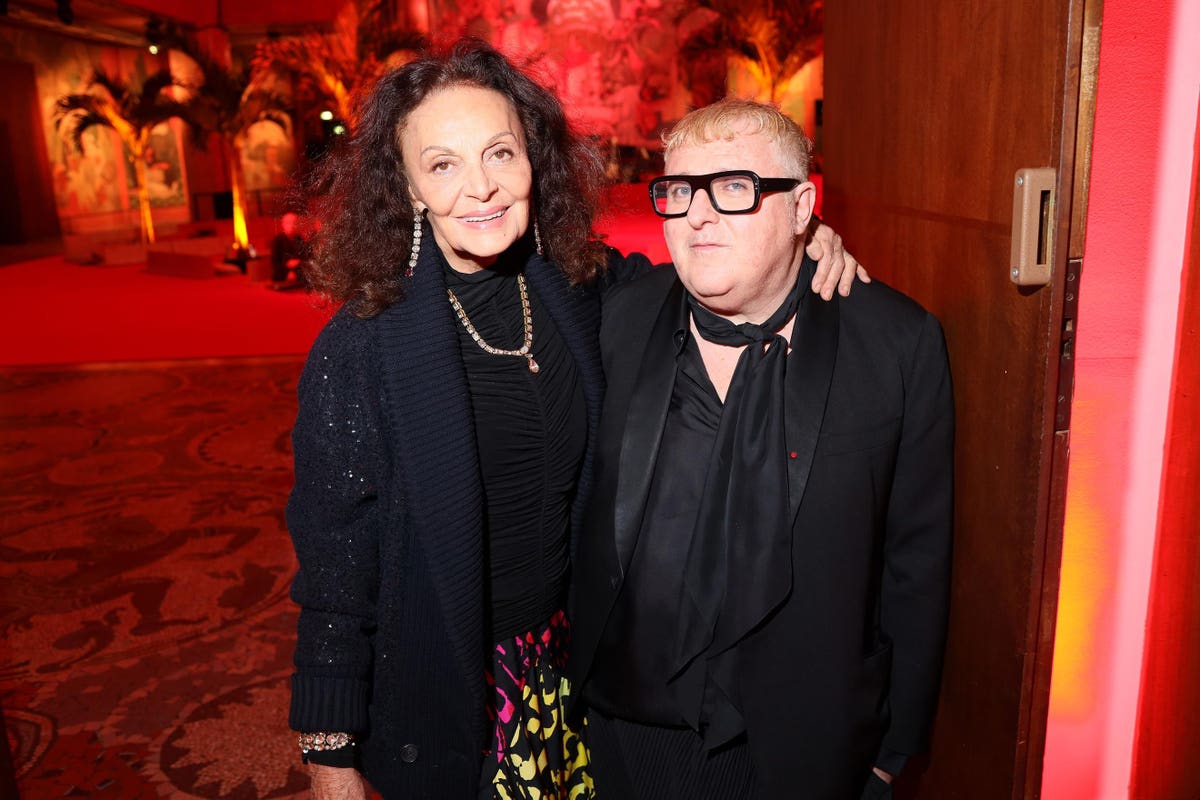 Sunday brought shocking and sad news to Paris and the entire fashion community as Alber Elbaz, 59, died due to complications from Covid-19. The designer is best known for his revival of the legendary Parisian fashion house Lanvin after stints at Geoffrey Beene, Guy Laroche and Yves Saint Laurent. He recently returned to collection design with the launch of AZ Factory in partner with Richemont. He is survived by life partner Alex Koo.

The Moroccan-born Israeli fashion designer was more than beloved by the industry; he was equally adored and respected for his feminine creations as he was for an effusive attitude towards dressing women and soul-baring nature. Aside from semi-annual fashion shows while at Lanvin, Elbaz presented his Pre-fall and Resort Collections in smaller, intimate venues, invariably introducing the collection with a personal story that revealed both his inspirations and insecurities. It was a cherished experience for those lucky enough to attend.

This ability to wear his heart on his sleeve was packaged in an irresistible signature black suit, white shirt, lively bow tie and shiny shoes topped off with an everlasting smile. This writer had the pleasure of covering Lanvin accessories collections for WWD during the height of his reign, which began in 2001 and ended in 2015.

In early 2017, I had the serendipitous occasion of running into Mr. Elbaz, alone, outside Le Meurice in Paris. I took the opportunity to re-introduce myself and tell him how special those intimate fashion shows were to me, preferring them to the impersonal nature of large-scale productions that don’t deliver the whole backstory at first glance.

As he abruptly left Lanvin in 2015 in a management dispute, I told him I hoped that I would have the chance to see his work in that up-close manner again one day. I explained though it wouldn’t be for WWD as I was recently laid off after 18 ½ years. He instantly related to my story, saying to me, “You know, sometimes we need someone to shut the door for us, so we can find another to open.” Hearing those words just weeks into my new freelance career touched me deeply and will never be forgotten. This ability to hone into a person’s experience so quickly and offer sage advice that he was de facto giving himself was part of the charm of this beloved couturier.

Elbaz collaborated on accessories with Italian leatherwoods brand Tod’s, nylon bags with Le Sport Sac and fragrance with Frédéric Malle after leaving Lanvin. After a five-year hiatus from his own collection, he launched AZ Factory with Richemont’s financial support and a new attitude earlier this year. Unveiled in a delightful film in which Elbaz’ unique character and philosophy on dressing women’s shines through, the launch had the makings of enticing the next generation of female fans. The timing of his passing as things were on the upswing track adds to this particular tragedy. It is also a stark reminder that France’s Coronavirus pandemic is still claiming lives despite months of confinement and semi-confinement.

Following is a reaction from industry professionals ranging from fellow designers, editors and retailers whom Elbaz worked with over the years.

“We met him few times in the last months, in the Tuileries garden or along the Seine river, walking alone, wearing two masks, and it was always such a joy. He was always on a positive note, like making fun of his blond hair and the one on my mum.

I have wonderful souvenirs from the Lanvin launch at Colette and the many different collaborations we did. Mr. Elbaz was always happy to invent something new, and he was always open to any project; he would always see the fun side of it. Of course, he knew how to make any women feel beautiful in his clothes. He was so modern in his approach.”

“I met Monsieur Elbaz in 2004 for a job interview. I remember he was on the phone with Paolo Roversi discussing their latest campaign together. The first thing he asked was my Zodiac sign. I told him I was a Virgo, and then we spent an hour talking about so many things. That is a moment I will cherish forever. He will be deeply missed. My forever admiration for Alber Elbaz.”

“It was with shock and enormous sadness that I heard of Alber’s sudden passing. Alber had a richly deserved reputation as one of the industry’s brightest and most beloved figures. I was always taken by his intelligence, sensitivity, generosity and unbridled creativity. He was a man of exceptional warmth and talent, and his singular vision, sense of beauty and empathy leave an indelible impression.

It was a great privilege watching Alber in his last endeavor as he worked to realize his dreams of ‘smart fashion that cares’. His inclusive vision of fashion made women feel beautiful and comfortable by blending traditional craftsmanship with technology – highly innovative projects which sought to redefine the industry.

Alber will be greatly missed by all of us who had the good fortune to know him or work with him. On behalf of all of my colleagues at Richemont and AZ Factory, I wish to extend our sincerest condolences to his family and friends.

On a personal note, I would like to add that I have lost not only a colleague but a beloved friend. Rest in peace, Alber.”

Alber’s death is heartbreaking. He was an exquisite designer and an exquisite person. In a way, his glorious clothes were raw-edged, silk manifestations of who he was. Like Alber himself, the clothes were often exuberant and always elegant. They helped the wearer feel her best self. In Alber’s presence, you always felt your best self; he made sure of it. Even during collection previews, a fraught moment for designers, Alber took the time to ask about you. And it was genuine; he really wanted to know. Alber’s exit from Lanvin in 2015 left a huge hole in fashion, one that we all hoped he would fill with AZ Factory. Now, he’s left a huge hole in our hearts.”

“Alber Elbaz truly revered women because he understood them. His time at Lanvin brought joy and fun to fashion. He treated women with dignity and love through his work.

Many fashion people my age have grown up looking at Alber Elbaz’s work as the utmost of fashion. It was fantasy. He will be remembered as one of the most talented fashion designers of the 21st century. He once said that he ‘writes with fabric’. That’s exactly how I feel about his work, poetry.”

“The news of Alber Elbaz’s passing was such a shock for the fashion and creative community to wake up to on Sunday morning. Alber was a rare gem in this industry. His talent was a mix of pure soul, creative genius thought and observation to the times we live in and how he could bring a bit of playfulness and whimsical flair into everyday life.

I will always remember Alber for being a kind, caring and generous soul. He would always take time to sit with me and ask me about my life, family and how I was doing. I remember meeting Alber and Alex for a coffee at the Mercer hotel during one of his pre-collections. I remembered that he liked cupcakes and brought him a box of them. The next day I received a handwritten note and personal sketch saying thank you. That was the kind of man he was. Always thoughtful and kind.

We are lucky to have experienced this creative magic. Alber was unique and an original whose talent was a gift to fashion. I am grateful and honored to have known him. He will be missed but not forgotten.”

“Alber was heart, love and light. There are no words that can begin to express the enormity of his exceptional and rare talent. It will always be Alber’s wit, gentle spirit and enormous heart that will be my strongest memory of him and perhaps his greatest legacy. His heart flowed through his hands into his work, his kind words and his endless energy that touched everyone he encountered; Alber knew no strangers.

An Alber Elbaz show was always epic glamour and joie de vivre, a seduction of the senses that delighted all, but more remarkable than the creativity of the catwalk was the overwhelming, pure rapture and enthusiasm that erupted when Alber appeared to take his bow.

This was not polite applause; this was unbridled, uncontrollable love for Alber as he was a loved rock star of the industry. The adoring crowds of press, retailers and clients that waited what seemed an eternity to share in his joy after a show were a constant reminder. He was far more than a designer of dreams but someone who touched them like a friend. In his always bustling showroom, the appearance of Alber (and not uncommon) brought everyone to their feet; everyone wanted to be in his glow. He made more than dresses; he made memories with every he touched through his art and craft. Alber, a gentle soul who was truly loved by so, so many, he will be truly missed.”

“The most consistent characteristic design trait he possessed was he always made women look good and feel good. He understood them, listened to them and they knew and felt this. He was sensitive to their bodies and know how to appeal to a wide range of women. This became a signature approach at Lanvin.

His career had highs and major disappointments, nevertheless, he stayed true to his vision. He was just getting started in his new venture, always thinking ahead of the curve and what would be the new way to appeal to the customer. He did away with the fashion calendar rules and creating 400 to 600 SKU’s in a collection.

The fashion world adored Alber because he was real and down to earth, something rare in the industry. He had an amazing, self-depreciating sense of humor. He made everyone around him self-feel good.

I remember my first lunch I had with him many years ago. We sat down and he immediately asked me my sign. We ended up as both Gemini’s and talked little about fashion but more about life. He had charm, charisma, and a sense of humor was totally unique. He left us too early, and I am sure the best of his work was yet to come.”

“We’re deeply saddened by the loss of Alber, his resilience and creative energy. His passing underscores the devastating impact of this pandemic, while at the same time reminding us that a changemaker is timeless, inspiring the fashion industry and beyond for years to come.”

“I always felt kindness and warmth in Alber’s presence. Whenever our paths crossed, I was naturally drawn to him and eager to share a moment together. I found his eye penetrating and was sure that he perceived a certain truth in everything. His extraordinary talent and knowledge were reflected in all his creations and allowed for a very personal and impactful silhouette. I’m incredibly sad that he has left us, particularly as he had become an entrepreneurial Couturier developing his own project.  Alber was totally lovable, he was a star, he will be missed by all.”

WITH LOVE, TRUST AND RESPECT: GOOD-BYE ALBER “It is with extremely heavy hearts that we announce the passing of our founder, Alber Elbaz. The power of his vision, his extraordinary imagination, his adoration of women, and his kind heart have fueled his latest gift to our lives: AZ Factory. He lived for fashion, and we were all so lucky to have been a part of this adventure, Alber’s project to reset fashion to care. Alber, we will all carry your mission in our hearts and your generosity in our lives. The world has lost a legend. We love you, Alber.”