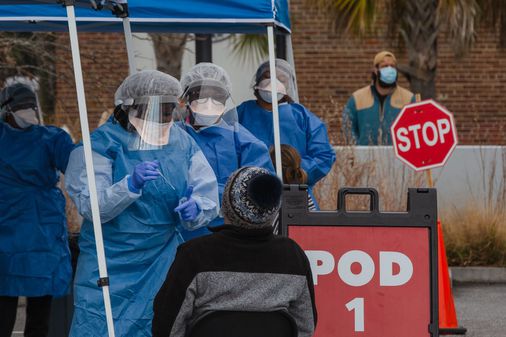 “We’ve got to get away from that chain of thought,” Fauci said on ABC. “The only way you really know the difference between vaccines is by comparing them head to head.”

Availability of the J&J shot is expected to accelerate the number of people fully protected from Covid-19 once the company ramps up production later this spring.

The vaccine is expected to be easier to distribute and administer than two cleared by the FDA in December. It can be stored in a refrigerator for long periods, while the others must be kept at far colder temperatures.

“You now have three highly efficacious vaccines, for sure,” Fauci said on NBC’s “Meet the Press.” “If I would go to a place where they had J&J, I would have no hesitancy whatsoever to take it.”

Fauci said the baseline level of coronavirus cases needs to fall further before the U.S. can confidently resume normal activities — or suggest that herd immunity is at hand — even as the vaccine rollout accelerates.

“We’ve seen what happens when you pull back prematurely,” Fauci said on CBS’s “Face the Nation.” “We will be” victorious over the coronavirus, “but we’re not there yet.”

Fauci was asked on CBS about an incident at the Conservative Political Action Conference in Florida this weekend, where South Dakota Governor Kristi Noem got wild applause for her criticism of him.

“I don’t know if you agree with me, but Dr. Fauci is wrong a lot,” Noem said on Saturday.

“I’m sure you can get a standing ovation by saying I’m wrong,” Fauci said. “Just take a look at the numbers. They don’t lie.”

On Monday, the U.S. passed the milestone of 500,000 deaths to Covid-19; that number is now above 512,000. The nation’s first death from the virus was announced during the CPAC meeting a year ago.

Scott Gottlieb, former head of the U.S. Food and Drug Administration, said there’s “more and more” evidence that vaccines are preventing Covid transmission as well as stopping those who’ve had the shots from becoming sick. That “makes them an even more important public health tool,” he said on “Face the Nation.”

While the U.S. vaccine rollout has accelerated and is poised to do so further, health officials are worried that states will move too quickly in lifting restrictions, even as more contagious variants are gaining ground.

“We understand the need and the desire, understandably, to want to just pull back because things are going in the right direction,” Fauci said.

“But you’ve got to get that baseline down lower than it is now, particularly in light of the fact that we have some worrisome variants that are in places like California and New York and others that we’re keeping our eye on.”

Of all the mutant Covid strains floating around, Gottlieb said only one seems to be gaining strength.