Cruella Is the Girl-Bossification of the Madwoman 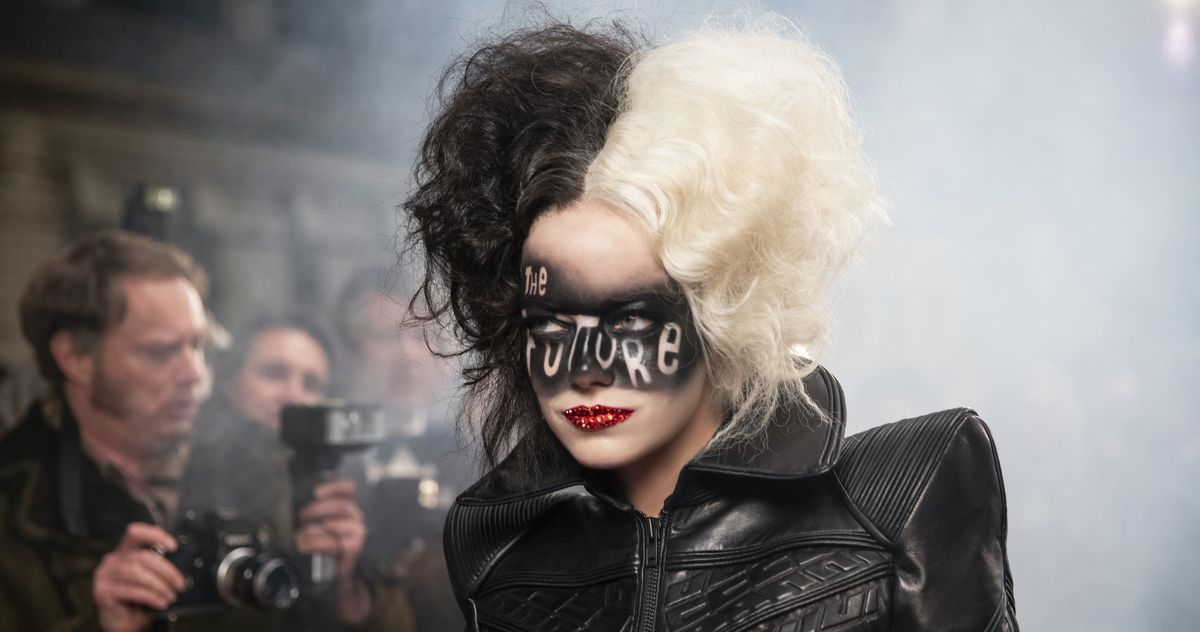 That Cruella is an atrocity with neither purpose nor soul shouldn’t come as a surprise. It is, after all, another in a long line of IP mining nostalgia and better works of the past that Disney is more than happy to keep churning out. Hollywood is an industry too myopic to understand its past and too inert to move into a more artistically dynamic future. But it’s the way this tepid film operates that makes it galling.

The pleasure of Cruella de Vil — first voiced by Betty Lou Gerson in the 1961 animated adaptation and later played by Glenn Close in the 1996 live-action film — is her outrageous style and cruelty. She is a woman intent on skinning Dalmatians to make herself a coat. Here, Cruella, played by Emma Stone, is softened and made aspirational. She’s given a loyal pooch as a sidekick so you know for sure she wouldn’t kill animals herself for the sake of fashion. (Although there is a throwaway joke about skinning Dalmatians that nods to her beginnings.)

The film begins with Cruella’s birth, depicting her mop of half-black and half-white hair as natural rather than an aesthetic choice. Born Estella, we see large swaths of her adolescence in the mid-’60s when she’s played by the precocious Tipper Seifert-Cleveland. She’s framed as such a rabble-rouser that the world doesn’t know what to do with her. She gets into fights at her prep school until she’s kicked out. She’s lonely; her only companion is a loyal puppy she finds who remains by her side. What splits her life in two is the death of her mother, who is knocked off the side of a grand, cliff-side estate by some (CGI) Dalmatians that were originally chasing Estella. She blames herself for her mother’s death and makes her way to London, where she falls in with Jasper (Joel Fry) and Horace (Paul Walter Hauser). They become lifelong friends, bringing her into their world of grifting and petty thievery. The bulk of the film takes place against the backdrop of late-1970s London, mining this setting for its various uprisings and counterculture dynamics. Eventually, she takes a job working for the Baroness (Emma Thompson), a conniving designer as haughty and fashionable as she is cruel to her staff. Estella sees her as a mentor, but grows angry when she learns more about her boss’s horrifying behavior (she is an unrepentant baby killer, among other atrocities). It’s here when Estella decides to become Cruella, setting her sights on usurping the Baroness as a designer.

Cruella, the film and the character, postures with an off-the-rack punk sensibility, as if Disney could hold even the echo of counterculture when it is the dominant culture itself. If you look closely, Cruella is indicative of the very culture it pretends to critique: Its central character is a white woman whose concerns and politics begin and end with herself. She’s a girl boss pretending to fight against the powers that be. She doesn’t want to overthrow the Establishment so much as become it. Cruella takes one of the richest narrative archetypes — the madwoman — and whittles her down into a glossy, hollow, capitalism-approved monster fueled by girl-boss politics. It has nothing to say about how women move through the world.

It’s hard to know where to begin with the aesthetic failures of this film. There are odd choices, like the insistence on conveying information through newspaper headlines superimposed on a scene. The scenes at night made me wonder if cinematographer Nicolas Karakatsanis forgot how to light properly in order to convey information. This is especially frustrating in the climax of the film, which is so pallid and gray I could barely make out details. The needle drops are especially confounding. They either feel odd, pointless, or utterly random, as if to showcase the depth of Disney’s pockets. Or in the case of “These Boots Were Made for Walking” — which plays when Cruella gets drunk on her boss’s whiskey and redesigns a window in the Liberty of London store out of anger — a way to drive home the thin pop-feminist thematics. The costume design, led by Jenny Beavan, is sometimes beautiful. It takes its cues from the works of Vivienne Westwood and Alexander McQueen, lending Cruella a punk air and the Baroness an austere quality. There are reams of crimson taffeta. Cruella’s trademark hair is fashioned into a crown. Swooping gold collars frame her face and shoulders. There are slinking gowns, towering heels, bodices thick with jewelry and boning. But all this beauty feels inert as it’s in service of a story that feels confused about what it wants to be and who the character at its center is.

You’ve seen the madwoman before. She’s your ex-girlfriend with smeared red lipstick refusing to quiet her anger during an argument. She’s the former wife trapped in the attic whose machinations have been branded unfit for society. She’s every woman who has been called “too much.” Cruella director Craig Gillespie, who previously helmed the miles-better I, Tonya, told the L.A. Times something that made it clear the madwoman was on his mind while making the film: “As a character, we’ve created this journey for her where she has this inner voice and she has this talent she’s trying to express. But she’s penalized for it because it’s outside of the constructs of society at the time. She’s in this rigid English system where you can’t be outside the lines.” But there’s nothing in the story that truly expresses Cruella’s inner life or makes clear the dynamics that would deem her as someone living outside the bounds society had formed for women at the time. “I’m Cruella. Born brilliant. Born bad. And a little bit mad,” Cruella says with authority at one point, as if merely uttering those things could make them true.

Classic Hollywood often excelled at depicting the inner lives of madwomen, most resplendently within the women’s picture — a strange genre spanning from the 1930s to the 1950s that only ended because of the fall of the original studio system. This genre made stars out of women like Joan Crawford and Barbara Stanwyck. Its films considered the sexual, financial, and psychological aspects of womanhood with a fiercely defined aesthetic, narrative grace, and truly dynamite acting underscored by a proto-feminist perspective. Cruella limns how Hollywood has learned all the wrong lessons from the 1950 powerhouse film All About Eve. In that film, the older woman who is being manipulated by an ambitious younger fan is the focus. Ever since then Hollywood has discarded considerations of ageism. Older women — in this case, the Baroness, whom Thompson plays with a touch of boredom — are the villains. It’s telling, too, that the luminescent Black actress Kirby Howell-Baptiste, who plays the deliciously named but poorly written Anita Darling, is slotted into the role of the friend who helps Cruella along her journey to become a fashion designer. She’s a tool for Cruella, not a defined character. What Cruella does have to say about womanhood is rooted in youthful whiteness. All of the film’s issues are rooted in its perspective on power, from who gets it to who truly deserves it.

It’s a wonder that Tony McNamara, who has a screenplay credit along with Dana Fox, could be involved in this given his intriguing work on the venomous The Favourite and the delightful series The Great. (Story-by credits go to Aline Brosh McKenna, Kelly Marcel, and Steve Zissis.) No lead actress could save a film so poorly conceived, aesthetically facile, and narratively rote, but Emma Stone is a particularly disappointing choice. In the past, I’ve enjoyed Stone’s work in The Favourite … and that’s pretty much it. But watching Cruella led me to look at that performance from a different perspective. I realized it wasn’t so much what Stone was doing that piqued my interest, but how the character was framed visually and written. In Cruella, Stone sounds like what an alien who only ever saw American actors playing British characters would think a British person sounds like. Her gestures are empty — a flourish of the wrist, the way she rolls or widens her searchlight eyes. Everything feels underlined in a way to mark Cruella as weird and different from her surroundings. But it just feels silly and poorly thought out. She lacks a sense of play. She doesn’t feel bold enough to fully rock the ostentatious frocks she wears. You can’t help but think of the camp extravagance Glenn Close brought to the role in 1996 and yearn for such a daring approach. Ultimately, Stone does not offer us a window into who this woman is, beyond a vehicle for mining IP.