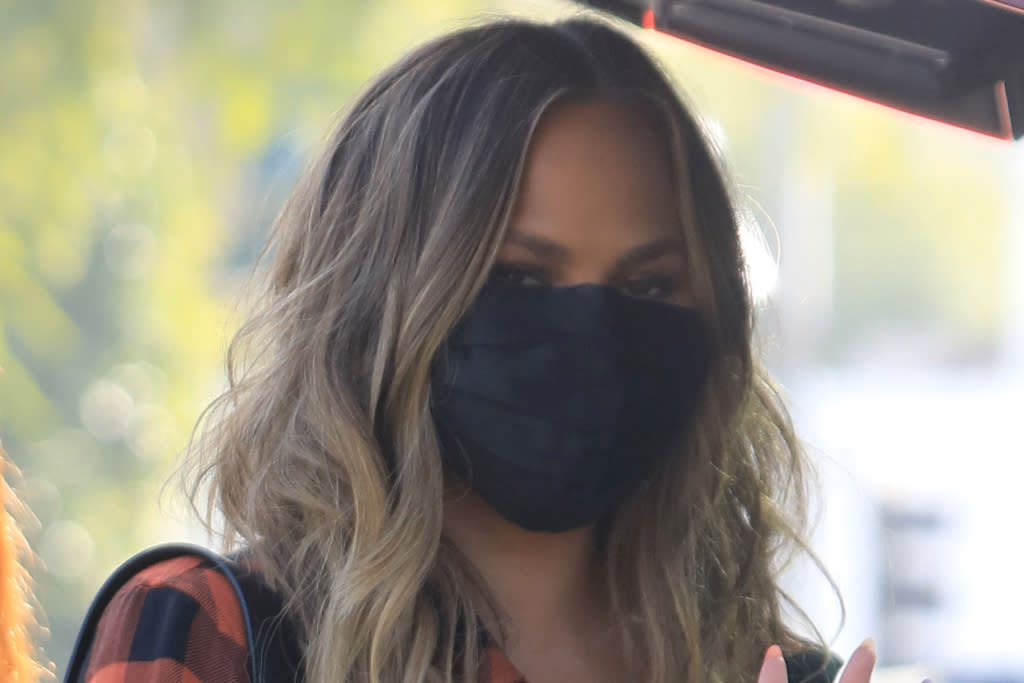 If you purchase an independently reviewed product or service through a link on our website, we may receive an affiliate commission.

Chrissy Teigen brought her signature bold style to the grocery store this weekend.

The model headed to Bristol Farms in Beverly Hills, Calif., on Sunday to grab snacks and more in a standout, off-the-shoulder flannel dress. The red and black number also featured a high-leg slit and came matched to an oversize Fendi tote.

When it came down to footwear, the media personality broke out another silhouette of her favorite Saint Laurent boots. The pointed-toe Niki style comes set atop a signature 6-inch cone for an extreme height boost, contrast by a leather front panel and smooth suede uppers. The stitched mid-calf style is currently sold out but similar styles retail from $1,225 to $1,995 at Farfetch.

The look yesterday is another addition to Teigen’s growing collection of styling shopping attire. In January, for example, the model and media personality hit the local store on Tuesday in an outfit that defied typical errand-running attire in the most clever way. Teigen’s look layered a chunky knit sweater from Line & Dot, available at Revolve, over a silky, lace-trim nightgown; the combination gave off a put-together, casual-chic vibe with an effortless touch that allowed Teigen to stay in her pajamas during the outing.

As for footwear, the Sports Illustrated Swimwear alumna tapped another growing trend to balance out the lifted hem of her attire. Her over-the-knee boots came coated in a soft suede upper, formed with a subtle square-toe front and a slouchy shaft design. The pair also came set atop a lifted block heel appearing to measure around four inches in height.

As for Teigen herself, the cookbook author‘s own footwear and apparel closet includes an endless list of designer names such as Saint Laurent, Balenciaga, Valentino and Aquazzura to name a few. Beyond her personal style choices, the model previously appeared on the cover of the Sports Illustrated Swimsuit issue and serves as an ambassador for Procter & Gamble; she has modeled in campaigns for the likes of Ugg, The Gap, Revolve, Quay Eyewear and more throughout her impressive career.

Click through the gallery to discover more of Chrissy Teigen’s chic style over the years.