Art by Amaya: Syracuse center uses her gift ‘to shine light on the positivity of Black women’ 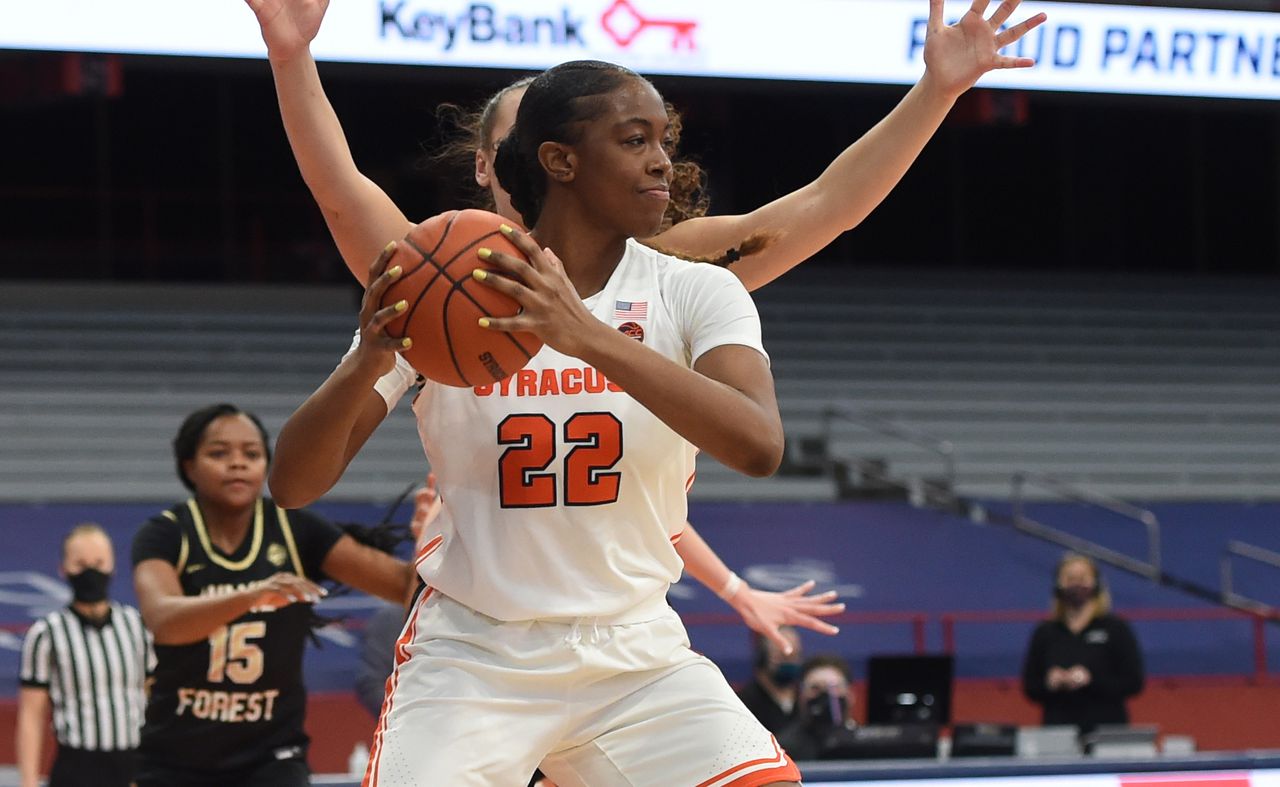 Syracuse, N.Y. — When Amaya Finklea-Guity glances at the paintings plastered on the walls of her bedroom, she sees different versions of herself.

Whether it’s the fierceness of her favorite singer and entrepreneur, Rihanna, the fashionable style of Teyana Taylor, or even the amount of detail in the braids displayed in her self-drawn portrait, Finklea-Guity sees herself represented in a way she can appreciate.

Those are just three of the 10 paintings that hang in Finklea-Guity’s room, but there are several more that symbolizes her as a Black woman and how she expresses her culture through her art.

She doesn’t have to look to social media or a television to see positive images of Black people, nor does she have to read an article or a book to hear from Black voices.

All she needs to do is look around at the canvases she’s created over the past couple of years.

Finklea-Guity, a senior for the Syracuse women’s basketball team, says she creates art to display the beauty of Black culture.

“A lot of things are blueprinted from Black culture. I kind of want to highlight it and showcase the simple beauty of it all,” Finklea-Guity said.

Finklea-Guity comes from a family that loves music and visual and performing arts. She’s had the creative bug for art since she was 6 years old, when she’d draw cartoons with her mom and grandmother.

Over time — without any formal art classes or training — she improved and began to transition from drawing cartoons to portraits of popular figures.

Art serves as a stress reliever for Finklea-Guity when she needs a break from school or basketball. She never wanted to it to be a career goal, but it’s always been her solace for when she’s anxious or worried. As soon as she completes a piece, she returns to her calm state.

Her final season of college basketball hasn’t been the easiest. And it’s arguably the most hectic year she’s had with the program due to the unpredictability of the coronavirus.

She averages just three points and 2.8 rebounds off the bench for Syracuse. The Orange missed 28 days between games due to a Covid-pause within its program.

Finklea-Guity missed an additional four games once Syracuse returned from its layoff due to contact tracing protocols. Without basketball and the amount of stress that comes with majoring in computer science, Finklea-Guity said she had two or three stressful moments when she used her art to decompress.

Those exact moments allowed her to produce the paintings of Rihanna and Taylor.

Finklea-Guity has a unique process when she’s in the mood to create. She doesn’t like to be surrounded by people because she enjoys her own space.

The time of day or night varies, but R&B music is usually always playing in the background. Her favorite current artists to listen to while she paints includes H.E.R., Frank Ocean and Summer Walker, or she can switch to the old-school vibe with Michael Jackson, Marvin Gaye and Stevie Wonder.

“I like to listen to my music and I literally paint for hours and I don’t even look up,” she said.

Before she douses her blank canvas with color, Finklea-Guity draws an outline of her subject in order to help her properly see the various shades throughout the picture. Her favorite portrait is a picture of Jay-Z, because it didn’t have any color and you could see the detail in his face based off her shading.

It typically takes her five to six hours to finish one portrait, and she says she can crank out two or three paintings a day if she wanted to.

Finklea-Guity, 22, only allowed a select group of people to see her art during her high school years at Noble and Greenough (Massachusetts).

That group included her mother, her teammates, coaches and her dorm friends because those were the only people she could be vulnerable around.

As someone who’s naturally shy, her art is an integral part of who she is and she couldn’t just give it to everyone. But that changed when she got to Syracuse and even more so in 2020, a year that transformed the lives of every almost everyone in the country.

“I was like, ‘OK, you’ve got to open up more. You gotta show people what you can do,’ so that was kind of a big decision,” Finklea-Guity said.

Finklea-Guity’s first step out of her comfort zone was making sure her work was on every major social media platform. She created accounts on Facebook, Twitter and Instagram under the name @artbyamaya_.

During the height of the pandemic, Finklea-Guity began to sell custom art pieces. This is also when she began to test her own limits. Instead of using canvases, Finklea-Guity began painting on graduation caps, pants and shoes. Her work was also featured on a national scale earlier this season during the broadcast of Syracuse’s win over Wake Forest.

“It was a little nerve-wracking at first, but I was glad with the response I got,” she said. “It made me feel good to know people actually liked my work.”

Last summer, Finklea-Guity’s portrait of her coach, Quentin Hillsman, was featured by @WomenHoopz, a popular account dedicated to helping spread awareness about women’s basketball. She even captured one of his favorite catchphrases in the piece: ‘Let’s get on down!’

Finklea-Guity wanted to highlight Hillsman not only because of his stylish fits on the sidelines, but because he’s the second Black coach in the program’s history and the second Black male at the helm of a women’s Final Four team (2016). He’s also one of five Black coaches in the ACC, along with Duke’s Kara Lawson, Virginia Tech’s Kenny Brooks, Virginia’s Tina Thompson and Notre Dame’s Niele Ivey.

“I was very excited just to showcase that for him,” Finklea-Guity said. “He put the little fire emojis on his Twitter page, so he liked it.”

Hillsman didn’t know his 6-foot-4 center drew the portrait of him until he was told by a team spokesperson.

“The crazy part about it is I remember when I first saw the painting. I was like, ‘Man, whoever painted this, they’re good,’ ” Hillsman said.

Once he found out Finklea-Guity was the artist behind the painting, he couldn’t believe it. He called her instantly and told her the portrait was amazing and asked how long she’d had her talent.

“It is amazing what she can do and obviously that is a God-gifted talent,” Hillsman said. “I draw like the little houses with the tree and the squigglies. That’s my art. I draw stick people, man. Anybody that can do anything with shapes and stuff, it’s amazing. I don’t know how she does it.”

The foundation of Finklea-Guity’s artwork will always be centered around highlighting Black women.

Before she left high school in 2017, Finklea-Guity wanted to dispel the underrepresentation of Black women through herself and her seven friends.

All seven friends sent her their favorite photo of themselves and Finklea-Guity painted portraits that highlighted their different hairstyles, facial features and fashion sense. Each painting has a red background because its boldness matches the statement.

It became what is known as her “My Black is Beautiful” project. She initially wasn’t sure how it would be received, but Noble and Greenough purchased the project and placed it in the school’s admissions office.

“I always want to shine light on the positivity of Black women,” she said. “Black women are always undermined for their strength, their beauty and their intelligence, so I like to showcase that in my art and showcase they are what people usually claim they aren’t.”

Whether it’s the resiliency that she’s watched through her mother, the overwhelming support she’s received from her friends or the pure joy she obtains when she finishes a piece, inspiration won’t be hard to find for Finklea-Guity.

All she has to do is look within herself.

Axe: Both Syracuse basketball teams having trouble out of the gate