Against the odds, Minnesota women reunited with long-lost wedding dresses 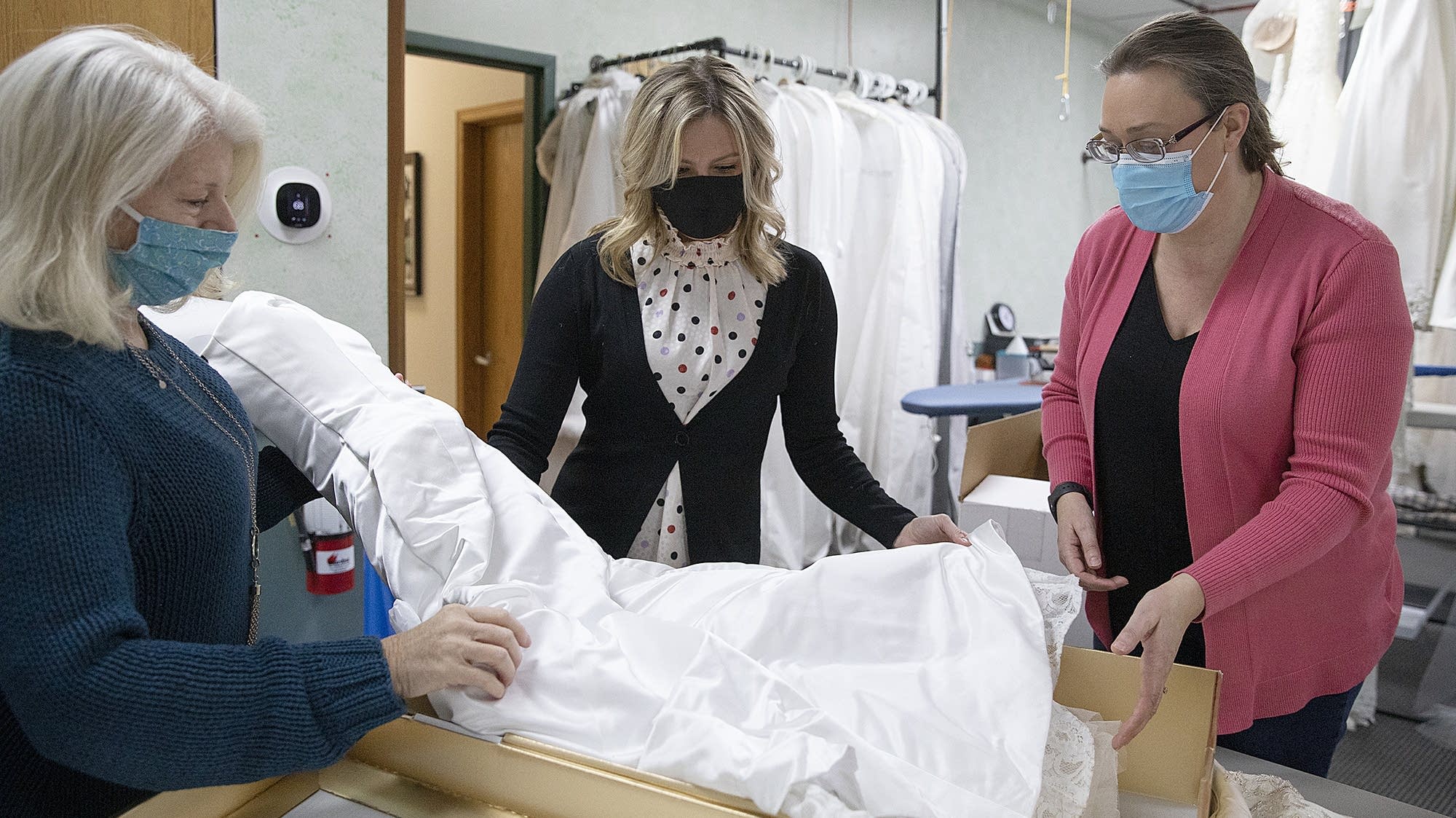 It’s one of those wedding horror stories.

“And in the back of my mind, I said, ‘I need to check my box,’ ” Timm recalled. And maybe another time after that. “I’ll do it another time,” she remembered thinking.

Eventually, her 5-year-old daughter, Brynn — as 5-year-olds do — started pestering her about it. After Timm married her husband Mike in St. Paul in 2013, she’d dropped off her dress at a Woodbury dry cleaner to be cleaned and boxed up shortly after their honeymoon.

Last month, Timm pulled the box out from under her stairs at her home in Clear Lake, Minn., to show her middle daughter the bright white, custom-made, lacy gown she’d been married in. But in the box instead she found an ivory, beaded, Oleg Cassini gown. With a train.

“After 8 years I was like … I just told my husband, ‘There is no way I am ever getting the dress back, babe, just so you know,’ ” Timm said. He offered to have another one made. She knew that would not do. “I just sat in a dark room and cried by myself that night, and he was like, ‘do you want to come out and hang out and watch a show?’ And I’m like, ‘I can’t. I just have to sit here and cry.’ “

But hope, like true love, never dies, so Timm got on the phone and called the dry cleaner in Woodbury that had boxed up her dress years back. It looked bleak: the business had changed hands twice. There was a tag on the wrong dress, but no name, just a business — Men’s Wearhouse — which obviously had NOT worn the dress. And could have been anywhere.

Enter Polly Nemec, who now owns the Woodbury dry cleaner store, along with several other shops.

“I really, really didn’t hold out a lot of hope,” she said.

But there was another clue: the claim tag in Timm’s box indicated the software used by the shop almost eight years ago was the same company Nemec still used. Nemec got on the phone, fingers crossed, to see if the company had any backup data from that long ago.

They did — and it showed the dresses had come in just two days apart. And there, in the digital dust, was an email address. Nemec fired off a message, hoping someone would see it.

Lystad, who lives in Stillwater, said it had been in a front entryway closet for nearly a decade, unopened.

Lystad had worked in the formalwear department of Men’s Wearhouse at the time, and had simply shipped over her dress — months after her 2012 wedding — to the dry cleaning shop that her store used. She got it back, life went on, and she hadn’t given it another thought.

Nemec brought Lystad and Timm together on Saturday at her shop in Stillwater, the aptly named Treasured Garment Restoration. In the back room, surrounded by dozens of other wedding dresses waiting to be boxed up — all of those kept separated at a safe distance — they spread out and admired the gowns they’d last worn the nights of their weddings.

Nemec took out the cardboard bust forms from the boxed dresses; she said they could stain the fabric. She rewrapped everything in tissue paper while the two women — brides again for the afternoon — looked on.

As Nemec wrapped up the second dress, though, Timm uncapped a felt tip marker and put her initials on the outside of her box. Just in case.

You make MPR News possible. Individual donations are behind the clarity in coverage from our reporters across the state, stories that connect us, and conversations that provide perspectives. Help ensure MPR remains a resource that brings Minnesotans together.

Donate today. A gift of $17 makes a difference.