[Warning: The below contains spoilers for the February 3, 2021 edition of AEW Dynamite]

It might only be February, but that hasn’t stopped AEW from taking a Beach Break on this week’s action-packed edition of Dynamite. It was a night of chaotic brawls, ruined weddings, and a surprise debut that is sure to send shockwaves through the world of pro-wrestling.

Without further ado, let’s break down the highlights from last night’s AEW Dynamite.

The Forbidden Door Is Blown Open

For months, there has been teasing of a crossover between AEW and New Japan Pro Wrestling (NJPW). But no matter how much fans wanted it, the idea always remained a mere fantasy, even if the current AEW and Impact Wrestling relationship made the possibility appear more tangible.

Despite a handful of AEW wrestlers having part-time contracts with NJPW, including Jon Moxley, who currently holds the IWGP United States Championship, the two companies seemed to operate as separate entities. The cheeky references on Dynamite and the Twitter beef between the opposing Bullet Club factions looked to be the extent of any potential crossover.

But that all changed last night when NJPW’s KENTA rocked up on Dynamite and ambushed Moxley after the main event (an exhilarating six-man tag match between Kenny Omega & The Good Brothers vs. Mox, PAC, and Rey Fenix). The No. 1 contender to the US Title hit Mox with his finisher, the Go-To Sleep, before sharing an ominous look with Omega, the current AEW World Champion. 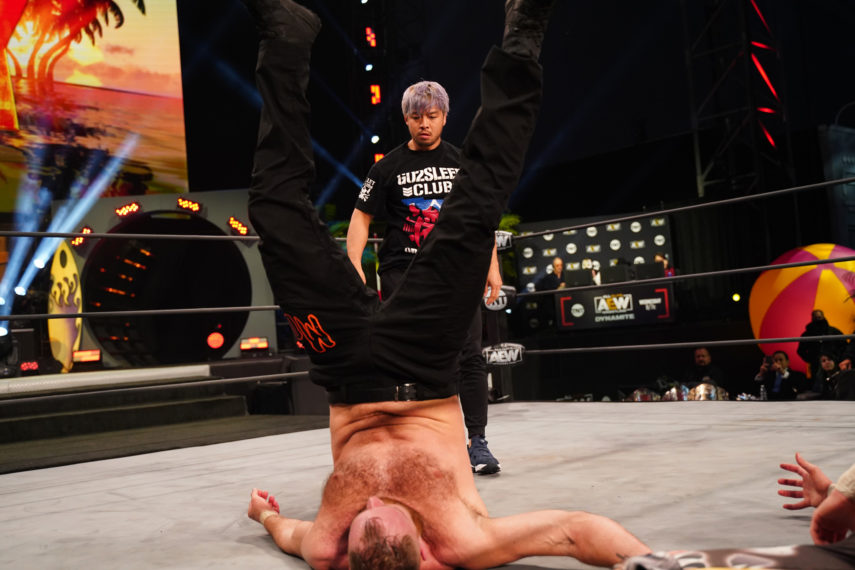 Not only was this an incredible moment due to the surprise factor, but its implications are monumental. Yes, it continues the build-up for the US Championship match between KENTA vs. Moxley at NJPW’s New Beginning USA on February 26, but it goes way beyond that.

This is the first time a full-time contracted NJPW star has appeared in an AEW ring, suggesting a closer working relationship between the two companies. Not to mention the Bullet Club connection between KENTA and Omega, and what that all means. With AEW, Impact, and NJPW all now involved in this story, we could be on the precipice of all-out cross-promotional wrestling warfare, and I, for one, can’t wait.

Keeping on the topic of crossovers, we received more information on the upcoming AEW Women’s Championship Eliminator tournament. The matches will be split into two brackets, with one half taking place in the U.S. and the other half in Japan. The winners of each bracket will then face off to determine the overall winner.

We also now know the women taking part in this tournament, and there are some exciting prospects, particularly on the Japanese side of the bracket. Emi Sakura and Yuka Sakazaki will make their AEW return, plus the legend Aja Kong. But it’s the host of new faces that are most intriguing: Veny, Ryo Mizunami, Mei Suruga, Rin Kadokura, and the highly-touted Maki Itoh will all make their AEW debuts.

This February the #AEW Women’s World Championship eliminator tournament begins! Here are your participants in this competition. pic.twitter.com/v9fqx8Q2b7

AEW’s handling of its women’s division has come under criticism in the past, but this tournament is a fantastic way to start rebuilding and focusing more on these talented wrestlers.

The Doctor Will Beat You Now

Two other women out to steal the show this week were Dr. Britt Baker and Thunder Rosa, who squared off for the first time after weeks of sneak attacks and insults.

This was one of the best women’s matches AEW has ever put on. Both women showed an aggressive side that elevated the match and perfectly played into this bitter blood feud. Neither competitor held back, with the action spilling to the outside — Rosa nailed a vicious looking Death Valley Driver to Baker on the stage.

It was Baker, though, who eventually picked up the win, with a little help from her sidekick, Rebel. This was the right decision; Britt needed the win so that she can go on to challenge Hikaru Shida for the Women’s Title, but Rosa still looked strong in defeat. I’m definitely up for more of Baker vs. Rosa in the future.

Wrestling weddings are just a powder keg waiting to explode, and that was no different here as the Kip Sabian and Penelope Ford, along with the best man Miro, took to the ring for their nuptials.

I’m not going to say this segment wasn’t a chaotic mess because it definitely was. However, I will say that it wasn’t as terrible as I was anticipating, which in a way is a compliment. There was a lot to enjoy here, from the Sinister Minister himself, James Mitchell, officiating the ceremony to Miro’s references to his previous WWE weddings to Orange Cassidy emerging out of a cake to seek his revenge on Kip and Miro. 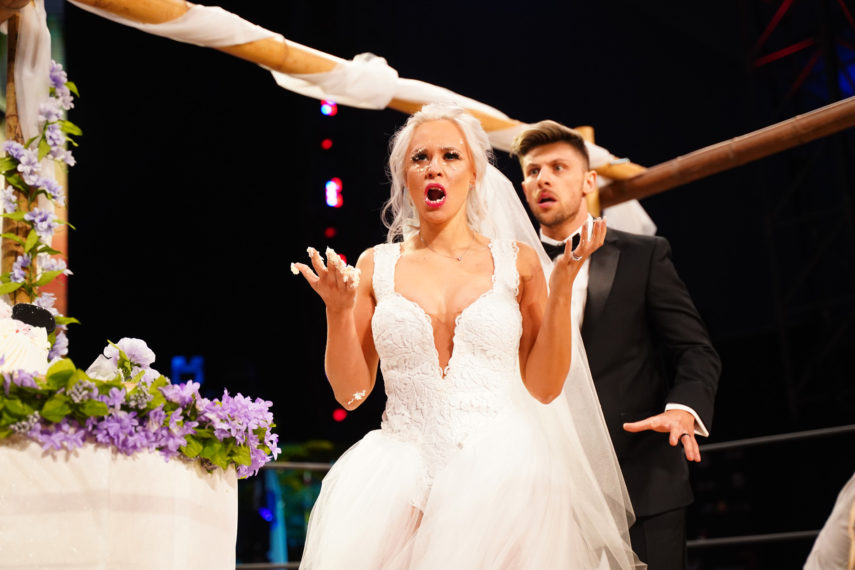 That said, the highlight, and what made the whole segment worth it, was when the fans responded to Miro’s repeated question of, “What is love?” by singing the chorus to Haddaway’s ’90s classic of the same name. “Oh baby, don’t hurt me, don’t hurt me, no more.” Only in wrestling.

Shaq Is Lacing Up His Boots

It tells you how much was going on in this episode that Shaquille O’Neal‘s announcement almost got lost in the shuffle. After the challenge was laid down by Cody Rhodes last week, Shaq has confirmed that he will be wrestling in AEW, teaming up with Jade Cargill to take on Rhodes and Red Velvet in a mixed tag match on the March 3 edition of Dynamite.

Celebrity matches in wrestling do very little for me personally, though I can understand their benefit. I will admit, though, I got a laugh out of Shaq practicing his finisher “The Black Tornado” on Inside The NBA.

Chris Jericho & MJF earn Tag Team title shot: The tag team battle royal made for a fun if somewhat messy opener to the show. There were some cool moments, particularly from John Silver and Luchasaurus, and it was nice to see some of the younger teams like Top Flight and The Acclaimed getting some shine.

But it was the veteran Jericho that ended up winning it for his team, earning a Tag Title shot for himself and MJF against The Young Bucks at Revolution. I can’t say I’m thrilled about this upcoming match, though I understand it will tie into the Inner Circle break-up narrative. There are just other teams I’d have preferred to see take on the Bucks, including other teams within the Inner Circle.

Bear Country arrive: The Lance Archer vs. Eddie Kingston Lumberjack match was a wild brawl, the highlight of which was up-and-comers Bear Country getting involved and taking out the Butcher & The Blade. I’m totally down for a match between those two teams. 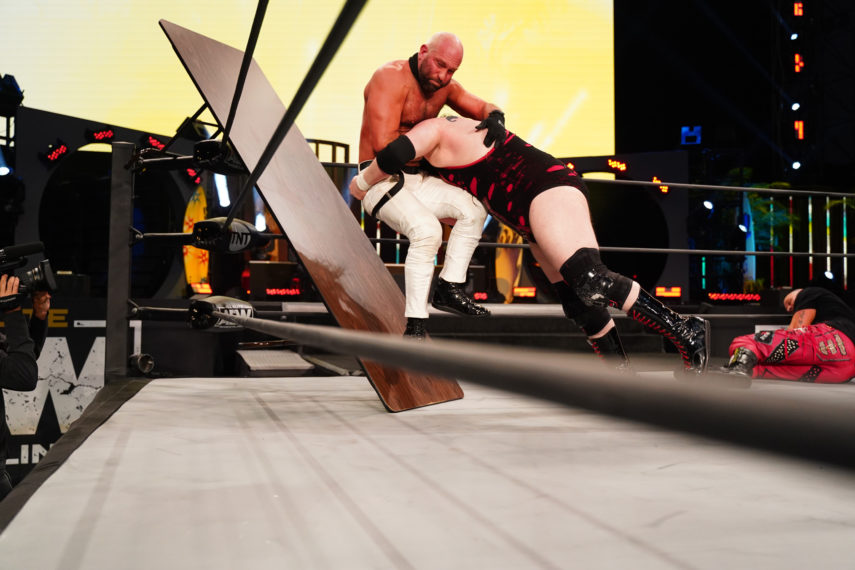 Starks doubts Sting: In what is now a weekly segment of Sting and Darby Allin being interrupted by Team Taz, the cocky upstart Ricky Starks questioned whether Sting is still the Icon of old. Sting cut a solid, old-school promo claiming that he’s still got it. This was fine, but I’m ready for some action in this story.

FTR kidnaps Marko: This was excellent. FTR had been suspended for one week and removed from the tag team battle royal due to their heinous actions against Luchasaurus last week. So, what did they do in response? They committed a felony by kidnapping Luchasarus’s friend Marko Stunt. To be continued.