A Woman’s Work: The cheerleader who took on the NFL for gender discrimination 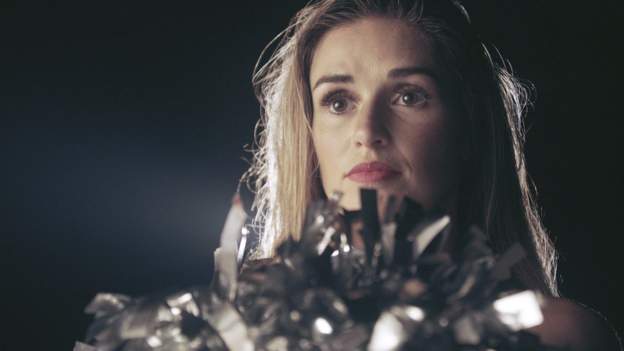 When Lacy Thibodeaux-Fields demanded fair wages and treatment for cheerleaders, she sparked a revolution in the NFL.

Growing up in Louisiana, Lacy Thibodeaux-Fields dreamed of being a cheerleader. In 2013, that came true when she was picked for the Raiderettes – the cheerleading team for the then Oakland Raiders.

But the dream would soon turn sour.

After 18 years of training, Thibodeaux-Fields claims she quickly discovered she was expected to work for less than the minimum wage, without additional compensation for mandatory training sessions or expenses related to public appearances.

In 2014, she decided to take a stand, bringing a lawsuit against the Raiders over employment laws. Over the next four years, several other cheerleaders across the US took action against other NFL teams, alleging wage theft, gender discrimination and harassment.

In a new film, A Woman’s Work, director Yu Gu follows the story of Thibodeaux-Fields and fellow cheerleader Maria Pinzone, who has an ongoing lawsuit alongside 73 other cheerleaders against the Buffalo Bills and their former cheerleading team, the Buffalo Jills.

Yu and Thibodeaux-Fields spoke to BBC Sport about the film, the lawsuits, and the impact on the women involved.

‘If you do this, you may never dance again’

Thibodeaux-Fields says that one of the things she cannot bear is the thought of anyone disliking her – so why take on the NFL – one of the most popular sporting organisations in the US?

It was not a decision she took lightly.

She says: “When I met my lawyers for the first time, they said: ‘Lacy, if you decide to do this, you need to understand that you may never dance again.'”

Dancing had been Thibodeaux-Fields’ whole life. After graduating from Louisiana Tech University, she joined the cheerleading team at NBA franchise the Golden State Warriors, where she says she was paid fairly.

But the season was strenuous, with 42 home games, and Thibodeaux-Fields already had a full-time job. The NFL seemed like a great option for the young mother.

“It had a shorter season… I’d still be able to dance in the evenings… it was going to be the dream job,” she says.

Of more than 600 women to audition, Thibodeaux-Fields was one of 40 to make the team.

“I loved my new team-mates and I just wanted to give it my all,” she says.

‘You guys are lucky to be here’

She says she soon discovered the team were expected to put in gruelling hours of training, without additional compensation.

“If you don’t get selected to dance a game – say you’re a couple of pounds overweight – then you don’t get paid for that game,” she says.

Pinzone recounts similar experiences at the Buffalo Jills. She describes in the film a culture of fear – doing “jiggle tests” to check weight before games.

Thibodeaux-Fields really began to have misgivings when she says she realised she was expected to cover expenses related to mandatory public appearances – including beauty treatments. She says she was even told which salon she should use; it was at least an hour and a half from her home.

“There were lots of little things like that that kept adding up – travelling for the calendar shoot, or finding out you were going to have to stay somewhere for the weekend and make arrangements,” she says.

“I would bring issues up with people in my particular group and my captain.

“We were told: ‘You guys are so lucky to be here, you need to cherish this moment.'”

‘More illegal than any contract I know of’

Thibodeaux-Fields claims her contract stated that cheerleaders would be paid $125 (£90) per game they worked, or $5 per hour. The federal minimum wage at the time was $7.25 per hour.

She also claims the contract stated cheerleaders would not receive any pay for the first nine months.

Thibodeaux-Fields says that was not made clear enough at induction, so she and her husband contacted a lawyer.

Sharon Vinick was the employment attorney who received a copy of the contract.

Speaking in the film, Vinick describes her reaction at the time: “There are more provisions in here that are illegal then any contract I know of.”

One of the key questions was whether the Raiderettes were employees or freelancers.

Darci Burrell, another employment attorney, tells the film: “The contract spells out almost immediately that they’re actually employees and, as a result, they should be getting paid for every single hour that they work.”

It was after Thibodeaux-Fields filed the lawsuit that she met film director Yu.

Yu told us she had become obsessed with American football culture whilst studying film production at the University of California.

She read about Thibodeaux-Fields’ lawsuit in the Los Angeles Times, and set up a meeting.

Yu’s initial pitch was to follow Thibodeaux-Fields throughout her daily life. Over four years, she captured the birth of three children, and a move to London.

And all the while more lawsuits against NFL teams were taken out.

By September 2020, the film states that 10 of the 26 NFL teams with cheerleaders had been sued for wage theft, unsafe work conditions, sexual harassment and discrimination.

“In the beginning I thought this was just going to be about one woman – her as a single protagonist,” Yu says. “But then I saw all these other women joining her and there was a kind of beauty in that, that I wanted to reflect.

“When you look at the history of the women’s movement in the US, it’s about people coming together. That’s what this story is about as well.”

‘I’d always felt like feminism was a negative word’

In one scene, Thibodeaux-Fields describes initially struggling with the word ‘feminist’.

“I’m from a very conservative, Bible-belt part of Louisiana and I’d always felt like feminism was a negative word,” she says.

“As I started to grow, I understood a little bit more. Feminism is exactly what I’m doing, saying: ‘I’m here, it doesn’t matter what you think of me, I’ve done a job for you and you owe me.'”

But not all of Thibodeaux-Fields’ team-mates – or former Raiderettes – supported her, and the film shows examples of the negative press she received.

“They need to remember why they’re there,” says one former cheerleader in the film. “It is a privilege and part of a sisterhood.”

“Women historically have been second-class citizens,” says the director. “That’s the structure we’ve been brought up in. We have all internalised that structure in some ways. As women, you’re forced to adapt.”

The lawsuit filed by Thibodeaux-Fields in January 2014 sought back pay and wages for herself and 90 current and former Raiderettes.

In July 2014, the Raiders offered new contracts for the 40 members of their cheerleading team, meaning they would earn $9 per hour and be paid for all hours they worked.

In September that year, eight months after the lawsuit was filed, the team made a settlement of $1.25m (£900,000) to the women in Thibodeaux-Fields’ lawsuit.

Thibodeaux-Fields believes her case, and the other lawsuits filed, have inspired change across the NFL.

“I had cheerleaders from some of those teams contact me and say: ‘You don’t know me, but we’ve just been given new contracts.'”

But Yu is frustrated it hasn’t gone further.

“There has still yet to be consistently wide change and transparency,” she says. “Any changes that have happened have done so under the table and for individual teams.”

Pinzone’s lawsuit against the Bills is ongoing. In the film, she voices frustration at attempts from the team to offer what she describes as low-ball settlements.

“The fact they thought we would accept something so low shows what they think of us: that we’re nothing,” she says.

How culpable is the NFL?

The film explores the question of how much power the NFL, and commissioner Roger Goodell, had over cheerleading teams’ contracts.

“Roger Goodell signs off on our contracts, so it’s kind of understood that he is aware or supportive of the things that they put in front of him, I would hope,” Thibodeaux-Fields says.

“When you’re on the team, you’re part of the NFL.”

An NFL spokesperson told BBC Sport: “For teams that have cheerleaders, the league has no role in their selection, duties, hours or wages.” They added there has been no discussion around changing that position.

The Raiders, now relocated to Las Vegas, have also been approached for comment by the BBC.

Thibodeaux-Fields now lives in Florida and her dancing, she says, is currently limited to the house.

Looking back, she is proud of the role she has played in battling for women’s rights.

“After 2018, with the Me Too movement, America finally started having these really great conversations about women in the workplace that I was having in 2015. It’s really cool to think of myself as being ahead of the time.”