A ‘Royal’ Wedding in Brooklyn 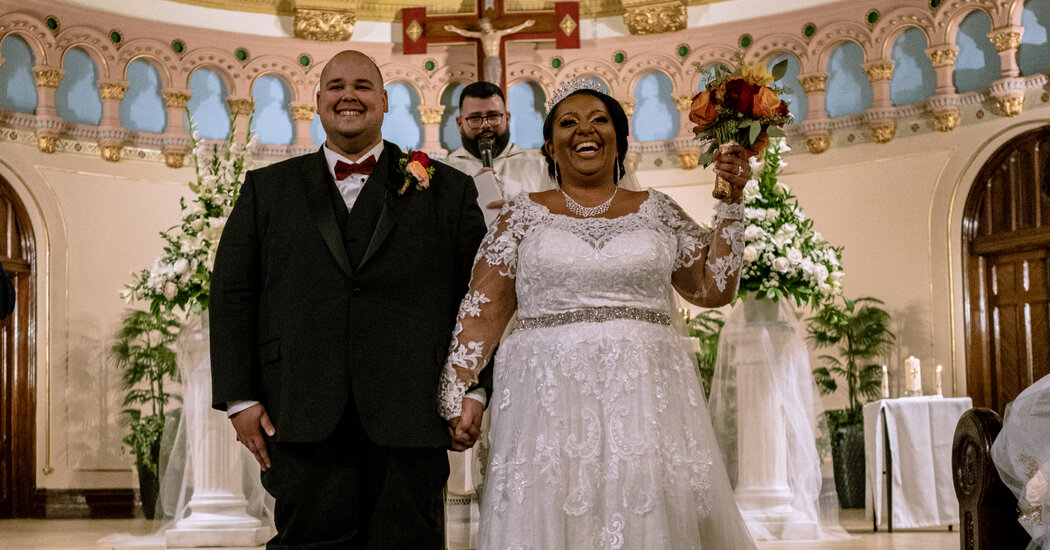 The love life of Ms. Francois was stalled, too, in part by her own high standards. “I don’t mean to sound prideful,” she said. “But I was like, ‘How can I meet someone of equal caliber to me?’” Both are Brooklyn educators. And both had resigned themselves to romantic disappointment when they met on the dating app Coffee Meets Bagel in January 2017.

Ms. Francois, 32, an assistant principal of instruction at MESA Charter High School in Bushwick, is a royal just in name. She grew up in Flatbush with her mother, Marie Marcella Francois, a retired health care worker who immigrated from Haiti in the 1970s.

At Columbia University, Ms. Francois was in a pre-med program, but when she graduated in 2011 and volunteered with Teach for America, she let go of the idea of becoming a doctor. Placed in the Flatbush community where she grew up, “I felt powerful,” she said. “I liked being that role model for success in my own community.”

Her romantic life was less successful. After a two-year relationship in college, she experimented with dating apps while living with her mother and working as a science teacher at the High School for Global Citizenship in Prospect Heights. “But in my experience, you’d start a conversation with someone, and then just when you’re getting into it they would ghost you, or you’d meet in person and not have chemistry,” she said.

For several years, she gave up. When she met Mr. Estevez on Coffee Meets Bagel, she had recently become an assistant principal after earning two graduate degrees, one in adolescent special education from Hunter College School of Education in 2013 and another in educational leadership from Bank Street Graduate College of Education in 2015. She was barely paying attention to the few apps she hadn’t deleted.

“I had reached a point where I embraced being single and felt like a complete person,” Ms. Francois said.

Mr. Estevez, 31, wasn’t holding out much hope for fulfillment via dating apps, either. They were a diversion, something to make him feel like he was at least trying to find love. But, he said, “the few dates I went on, I didn’t get anything out of them.”

He was living in Williamsburg with his parents, Iluminada Ferreira and Ramon Estevez, when Ms. Francois messaged him to say they seemed to have a lot in common: They were both teachers and both the children of immigrant parents.

He came to New York from the Dominican Republic in the mid-1980s. After graduating from St. Joseph College New York with a degree in child studies in 2012, he earned a master’s degree in literacy and cognition there in 2014. By then he had figured out that teaching kindergartners, his first job, was not for him.

“Now that I’m older and heavier and balder, I don’t know how I had the energy to be with 28 little kids in a classroom by myself,” he said. Since 2015, he has taught older elementary schoolchildren at Public School 18 in Williamsburg.

[Sign up for Love Letter and always get the latest in Modern Love, weddings, and relationships in the news by email.]

Ms. Francois’s attention on Coffee Meets Bagel was welcome. But it intimidated Mr. Estevez. “I’m humbled to say that Princess is my first and only stable romantic relationship,” he said. “When you get to be as old as me and you’ve never dated anyone, you’re like, ‘Oh, God, what’s wrong with me?’ I had a lot of self-doubting issues.”

After they switched from the app to texting at the end of January 2017, Ms. Francois hinted that they should meet in person. He dodged to get a grip on his insecurities. “I wanted to wait two months at least.” By Feb. 2, she had worn him down.

They met on a freezing Thursday at the Marcy Avenue subway station in his neighborhood. He had a dinner plan in place, at the restaurant Patrizia’s.

“But I told her, ‘Before we go, I’m going to give you a walking tour of historical Williamsburg,’” he said. Brutal cold aside, she went along, impressed by his thoughtfulness. Later he impressed her with a slate of first-date questions; he had memorized a list suggested by Google.

“I remember thinking, ‘He seems so sweet and passionate,’” Ms. Francois said. “I hope this works.” When she said good night, she sensed he was reluctant to kiss her. “So, me being the bolder one, I realized I had to make a move.”

On their second date, less than a week later, they went to Max Brenner in Union Square — and Mr. Estevez asked Ms. Francois to be his girlfriend.

The result was disastrous. “I thought, ‘She initiated the kiss, so let me initiate something this time,’” he said. When he asked, though, she hesitated. Then she said she needed time to think. “Her reaction gave me extreme anxiety. I thought, ‘I am such an idiot.’”

When she agreed to meet him for a date at the Wheelhouse, a restaurant in Bushwick, days later on Feb. 14, he was circumspect: “I thought, even if she says no, at least I had a date for Valentine’s Day.” Then came a surprise. At the end of the date, Ms. Francois said, “Yes, I will be your girlfriend.”

“I couldn’t believe it,” Mr. Estevez said. “It took me 27 years, but I finally had a girlfriend.”

Ms. Francois cracked the world open for him. Unlike Ms. Francois’s mother, who listened to Haitian radio and talked frequently with her daughter about her home country, Mr. Estevez’s parents didn’t emphasize their Caribbean culture. So she started a tradition of bringing him to the West Indian Day Parade each Labor Day to steep him in Dominican heritage.

When he agreed to accompany her on a vacation she planned to Portugal that July, he had only been out of Brooklyn a handful of times, to visit family in the Dominican Republic. The trip, he said, was magical: “A little old man asked us, ‘When are the wedding bells?’”

In 2018, he knew he wanted to marry her. He also knew better than to rush into asking, so he waited a year and, on April 22, 2019, summoned his courage. During a spring break trip to Egypt, he dropped to one knee on the Great Pyramid of Giza.

He had selected the setting as a nod to her name and bearing. “I saw Egypt as the land of kings and queens,” he said. “And Princess is royalty.”

“I was in complete shock, but so happy,” Ms. Francois said.

When Covid-19 started holding the world hostage in March 2020, Mr. Estevez was still living with his parents and Ms. Francois was renting an apartment near her mother in Flatbush. Their plans for a November wedding went out the window.

“We hunkered down in separate places, and that was really hard,” Mr. Estevez said. For three months, they saw each other just through screens; Ms. Francois was worried about exposing her high-risk mother to the virus, which Mr. Estevez contracted early.

Their reunion came in July 2020 at an urgent care center, where Mr. Estevez was being treated. He had fainted while having his blood drawn during an antibody test.

“So many people in communities of color were dying,” she said. “Three months seemed like a small sacrifice.” His acceptance of her cautiousness was rewarded in January, when they moved into an apartment in Midwood and started planning the wedding that would become what she called “a true uniting of Hispaniola,” referring to the island in the West Indies that encompasses both the countries of Haiti and the Dominican Republic.

Ms. Francois and Mr. Estevez were married Sept. 5 at Transfiguration Roman Catholic Church in Williamsburg; 150 guests, all in masks, lined the pews. Before Ms. Francois’s mother escorted her down the aisle, attendants rolled out a white carpet. Ms. Francois, in a white lace dress and tiara, made her way toward Mr. Estevez, in a black suit and red bow tie.

Moments later, Rev. Jason Espinal, a Roman Catholic priest and the officiant, told Mr. Estevez: “As you were smiling, as you were trembling, you gave us all that look: She’s the one,” he said. The ceremony included readings in Haitian Creole by the Rev. Jeremias Castillo and in Spanish by the Rev. Schned Bruno.

The Rev. Espinal encouraged Ms. Francois and Mr. Estevez to let go of their professional instincts, at least for the day. “As teachers I know you love to plan,” he said. “But don’t worry about 10 years, 20 years, 50 years from now. Worry about committing to your vows today.”

Merriment A reception was held that evening at Terrace on the Park in Flushing Meadows Corona Park, Queens. “Buen Provecho,” which translates to “enjoy,” was printed on menu cards. Later, a DJ played a mix of Haitian kompa and zouk and Dominican bachata and merengue.

On the Move During the ceremony, The Rev. Espinal praised Mr. Estevez for his royal proposal at the pyramids. But Ms. Francois gets most of the credit for orchestrating their ongoing adventures. Outside of school, she blogs as Franny the Traveler. “It’s my passion,” she said.

Bride faints, vomits and gets pooped on during wedding